Some Christians have the idea that faith and reason are in conflict, divided by some unbridgeable chasm. They think that one takes over where the other leaves off. In reality, faith and reason work together seamlessly to help us know and love our Maker.

Many Christians perceive a conflict between reason and faith. On the one hand, God tells us to reason (Isaiah 1:18). We are to have a good reason for what we believe, and we are to be always ready to share that reason with other people (1 Peter 3:15). So we attempt to show unbelievers that our belief in the Scriptures is reasonable, justified, and logically defensible. The Bible makes sense.

So, which is it? Are we to live by reason or by faith? Are we supposed to rely upon our intellect, drawing rational conclusions, rejecting those things that don’t make sense? Or are we to accept the teachings of Scripture without regard to logic and reason, even if it does not make any sense?

This apparent conflict troubles many people. But it stems from a critical misconception about the meaning of both faith and reason. When both terms are properly defined in their biblical context, any apparent conflict disappears. Yes, we are to have good reasons for what we believe, and we are also to have faith. In fact, without the latter, we could not have the former.

Mark Twain once defined faith as “believing what you know ain’t so.”1 Perhaps this is what many people have in mind when they think of the word faith. Indeed some people seem to pride themselves in their belief in the irrational—thinking that such “faith” is very pious. “Why do I believe in the Bible? Well, I guess I just have faith.”

But is this what the Bible means when it uses the word faith? Not at all. The Bible does not promote a belief in the irrational or any type of unwarranted “blind faith.”

Some people have said, “Faith takes over where reason leaves off.” Taken this way, rationality is seen as a bridge that reaches only partway across a great chasm; faith is needed to complete the bridge and reach the other side.

People who take this view would say that Christianity cannot be proven, that reason leads us most of the way to God and then we must make a “leap of faith” in order to say that Jesus is Lord. This is a very common view among Christians. But this is not what God’s Word teaches about faith.

The Bible itself tells us what faith is. Hebrews 11:1 tells us that faith is the substance of things hoped for, the evidence of things not seen. So biblical faith is not blind but is strongly warranted confidence. The phrase “hoped for” does not imply a mere wishful thinking as in “I sure hope the weather is nice next week.” Rather, the Greek word (ελπιζω) indicates a confident expectation: the kind of confidence we have when we have a good reason to believe something.

For example, when we believe that God will keep a promise, this constitutes faith because we cannot “see” it and yet we have a good reason for it: God has demonstrated that He keeps His promises.

The Place of Reason

As many people have misunderstandings of faith, they also have misunderstandings of reason. Reason is a tool that God has given us that allows us to draw conclusions and inferences from other information, such as the information He has given us in His Word. Reason is an essential part of Christianity; God tells us to reason (Isaiah 1:18) as the apostle Paul did (Acts 17:17).

In fact, I could not know that I am saved apart from using reason. After all, the Bible nowhere says that “Dr. Lisle is saved.” Instead it tells me that “if you confess with your mouth the Lord Jesus and believe in your heart that God has raised Him from the dead, you will be saved” (Romans 10:9). I have genuinely acknowledged that Jesus is Lord, and I believe that God raised Him from the dead. Therefore, I am saved. I must use logical reasoning to draw this conclusion.2

This is perfectly appropriate and is the kind of reasoning God expects us to use. We are to reason from the principles of God’s Word.3

People misuse reason when they frame their worldview apart from God’s Word. This can involve either treating reason as its own ultimate standard (in other words, a replacement for God’s Word) or tossing it aside as irrelevant to faith.

Neither of these positions is biblical. We are never to attempt to reason in opposition to the Word of God. That is to say we are not to treat God’s Word as a mere hypothesis that is subject to our fallible understanding of the universe.

This, after all, was Eve’s mistake. She attempted to use her mind and senses to judge God’s Word (Genesis 3:6). This was sinful and irrational; she was trying to use a fallible standard to judge an infallible one.

We are never to “reason” in such an absurd, sinful way. Instead, we are supposed to reason from God’s Word, taking it as our ultimate unquestionable starting point. Any alternative is arbitrary and self-refuting.4 Reason is not a substitute for God; rather, it is a gift from God.

On the other hand, we are not to reject reason. God is rational,5 and so we should be, too (Ephesians 5:1). We are commanded to seek wisdom and understanding (Proverbs 4:5, 7). God wants us to use the mind He has given us. But He wants us to use our minds properly, in a way that is honoring to Him.

Faith Is Necessary for Reason

Biblical faith and biblical reasoning actually work very well together. In fact, faith is a prerequisite for reason. In order to reason about anything we must have faith that there are laws of logic which correctly prescribe the correct chain of reasoning. Since laws of logic cannot be observed with the senses, our confidence in them is a type of faith.

For the Christian, it is a reasonable, justified faith. The Christian would expect to find a standard of reasoning that reflects the thinking of the biblical God; that’s what laws of logic are.6 On the other hand, the unbeliever cannot account for laws of logic with his or her own worldview.7

Since laws of logic are necessary for reasoning, and since the Christian faith is the only faith system that can make sense of them,8 it follows that the Christian faith is the logical foundation for all reasoning (Proverbs 1:7; Colossians 2:3). This isn’t to say, of course, that non-Christians cannot reason. Rather, it simply means they are being inconsistent when they reason; they are borrowing from a worldview contrary to the one they profess.

Can We “Reason” Someone to Heaven? 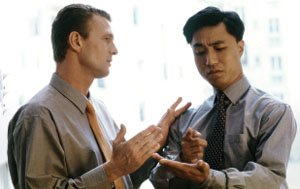 Although reasoning from the Scriptures is an important part of the Christian’s life, reason alone is not sufficient to lead us to Christ.

After the fall of Adam, human beings no longer possessed the ability to correctly understand spiritual matters (1 Corinthians 2:14). It is our nature to distort the truth (2 Peter 3:16). So we need the help of the Holy Spirit even to understand and accept the fact that Jesus is Lord (1 Corinthians 12:3).

This explains why it is impossible to “reason someone into heaven.” Salvation is accomplished by God’s grace received through faith in Christ alone (Ephesians 2:8; Romans 3:24; Titus 3:5). It is ultimately the Holy Spirit who convinces people and enables them to receive Christ (John 16:8–15).

Some may ask, “Why then should we do apologetics? Why should we try to reason with people if it is the Holy Spirit who will ultimately convince them?”

There are two reasons.

Second, God can bless our discussions with unbelievers and use them as part of the process by which He brings people to Himself (Romans 10:13–14). Although salvation is accomplished by Christ alone, God has given us the privilege of telling others about this good news and making a reasoned defense of it.

Reasoning is a crucial part of defending the faith. But we must always keep in mind that conversion is up to God alone. It is not our job to “convince” the unbeliever—nor can we. It is our job to make a good case; it is the Holy Spirit’s prerogative alone to bring repentance.

One Christian may plant a seed, and another water it, but God alone brings the increase (1 Corinthians 3:6–7).