God has blessed us with minds to discern messages that come to us. Don’t just receive the things that are presented to you, but take the time to stop and ASK questions.

ASK about the person’s Authority on the topic, whether their Starting point is biblical or humanistic, and how they Know what they claim to know.

In the previous articles we looked at a framework for evaluating truth claims and thinking critically about any new idea that comes to you. To summarize, when you hear a truth claim, you can ASK critical thinking questions about the person’s Authority on the topic, whether their Starting point is biblical or humanistic, and how they Know what they claim to know. That was followed with several applications to scientific information.

Now we turn to look at a few examples of critical thinking that relate to biblical topics. Evaluating claims made about or based upon the Word of God are even more important than claims of a scientific nature. We will examine these with a bit more brevity having already practiced how to ASK the right questions.

Dr. Andrew Snelling, a geologist who trusts the Bible as authoritative, writes the following (excerpted from a more thorough explanation) about how the Flood of Noah’s day operated:

Therefore, using catastrophic plate tectonics as a model, mechanism, and framework to describe and understand the Genesis Flood event is far more reasonable and is also consistent with the Bible. . . . Only now are we beginning to understand at least part of the means God may have used to bring this world-destroying judgment to pass, including catastrophic plate tectonics.

Dr. Snelling is asking you to believe that the Catastrophic Plate Tectonics model can explain the globe-devastating Flood in a scientific sense, describing the mechanisms and outcomes of the catastrophe.

Authority: Dr. Snelling has a PhD in geology and is actively involved in scientific research and reports, so he is well qualified to speak on this topic.

Starting Points: Dr. Snelling holds firmly to the Bible as truth, looking to make sure his ideas are consistent with the Bible.

Know: Here, Dr. Snelling is putting forward a model that is consistent with the Bible. He uses tentative language, “squishy” words, in an appropriate way. He acknowledges that much of the study is just beginning to understand what processes God may have used to bring about the Flood.

Final Analysis: This idea can be accepted as a possible model for the Flood, understanding that as more information comes to light the model might be adjusted, but never in a way that is contrary to Scripture.

Another View of the Flood

As we continue to consider examples of critical thinking, let’s examine another view of the Flood from the BioLogos Foundation, a group of Christian scholars.

Second, [a global flood] would require an inordinate amount of water to flood the entire Earth. . . . In either case, the water is said to have risen from the Earth, which makes it more likely that these terms were referring to irrigation canals. A similar terminology is used in reference to the flood (Genesis 7:11), where “fountains of the great deep burst open, and the floodgates of the sky were opened.” But when we look closely at the original Hebrew text and consider the use of the words fountains and deep in other passages, it is more likely that the fountains of the deep were also irrigation canals.

The explanation above asks you to believe that the Flood was a local event that involved the flooding of irrigation canals as one source of water—the fountains of the great deep.

Authority: While there is no author given for the article, those involved in the organization are considered experts in various fields, most teaching at universities.

Starting Points: The authors claim to be Christians and say that they believe the Bible is “the inspired and authoritative word of God.” However, they also clearly indicate in their belief statement that they believe the earth is billions of years old and that humans evolved from other animals.

Know: The claim is based on many factors described in the full article, but the point above is based on an interpretation of “fountain” in Hebrew which they suggest likely refers to irrigation canals. Several of the other points in the article reject the global Flood and that every kind of animal was on the Ark on the grounds of our current scientific understanding.

Final Analysis: Despite the expansive language of Genesis 6–9 in describing the Flood, the authors draw a conclusion that the Flood was local. This is done on extrabiblical grounds and contrary to the clear meaning of the text, so the claim must be rejected. Applying our critical thinking to this example, we see it falls short. 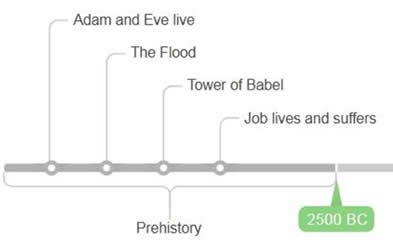 Authority: This image comes from a reputable Bible software program, but no credentials are given. This should raise a flag in our minds and cause us to be cautious.

Starting Points: Coming from Bible software, we assume that the intent is to faithfully communicate what the Bible teaches, but we know that there are many who compromise in many areas.

Knowledge: This image uses an unbiblical buzzword—prehistory. Genesis 1 records history from the beginning, so nothing related to the earth can be prehistoric. Further, the spacing on the timeline and the dates show that the biblical chronology has been ignored. The Flood should be at approximately 2349 BC and Adam and Eve 1,656 years before that. Using the genealogies in Genesis 5 and 11, the actual dates for these events can be determined.1 The producers of the timeline leave the dates in general terms rather than specifics.

Final Analysis: After thinking critically about this example, we should reject this section of the timeline because it fails to use the Bible to define the dates. Rather, they seem to empty the biblical history of the clarity available in the text. Using vague dates allows this timeline to appeal to a broad audience who would reject the Bible’s clarity because of the influence of dates given by those who believe in an evolutionary view of history.

Images are also used to communicate messages. This idea is enshrined in our phrase “a picture is worth a thousand words.” We can apply the ASK framework to images as well, but we have to stop and think a bit before we can analyze the message since there are no direct propositions in an image.

What message is this image of party favors and decorations intending to communicate? 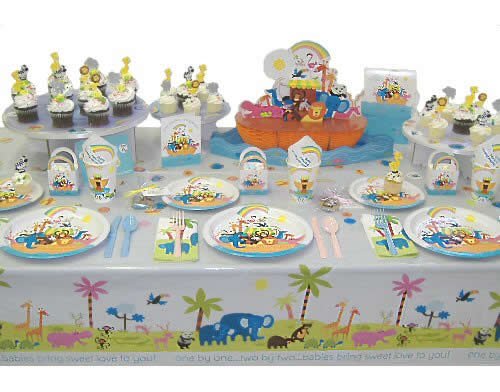 Authority: We have no reason to trust this company’s handling of the Bible.

Starting Points: We really have nothing to go on, but there is at least some recognition of the biblical description of the Ark.

Knowledge: The image portrays a small Ark with happy animals and a festive theme.

Final Analysis: Birthday parties are fun and festive celebrations of life. The Flood was sent as a judgment of the extensive, wicked sinfulness of man which God judged by killing every person on the planet but eight souls. The Ark was not a tiny boat crammed full of animals. To use this theme is to say that what really happened in the Bible is not accurate, or to cover its grave consequences with whimsy, casting doubt in the truth of Scripture. In the same vein, why do people decorate their nurseries with Noah’s Ark themes? Stopping to apply critical thinking from a biblical starting point, the Flood is not exactly a theme fitting for the celebration of new or continuing life.

I won’t take the time to examine any particular song, but it is a great exercise, especially with much of the music that is popular on Christian radio stations today. Take some time to print out the lyrics of a current song or open up to an old hymn and ASK some questions about it, as demonstrated in the above examples of critical thinking.