These examples of critical thinking show how we can apply the ASK framework to evaluate scientific claims.

ASK about the person’s Authority on the topic, whether their Starting point is biblical or humanistic, and how they Know what they claim to know.

In the previous article we looked at a framework for evaluating truth claims and thinking critically about any new idea that comes to you. To summarize, when you hear a truth claim, you can ASK about the person’s Authority on the topic, whether their Starting point is biblical or humanistic, and how they Know what they claim to know.

Using this mnemonic device, you can learn how to stop and ASK the right when evaluating any truth claim, regardless of its source. As you learn, you can be passing these ideas on to those you are discipling, teaching them to look to Scripture as the ultimate authority in every area of life.

You likely get your scientific information from sources that digest it for you. There are many popular outlets for scientific information about the latest fossil finds or medical research; most major news outlets provide a section for such ideas, while some websites are devoted to such news. In general, the authors of these articles examine an article or other item published in a scientific journal like Science or The Journal of the American Medical Association and then presents the information in the article along with some quotes from the authors, and sometimes a contrary point of view, to explain what the find means. However, even those who claim to be fair and balanced are not necessarily friends of the Bible. Let’s look at a few examples of critical thinking and put the ASK framework into practice.

Of Asteroids and Dinosaurs

Here are a few samplings from the article that you can use to evaluate the claim:

Earth’s climate may have been at a tipping point when a massive asteroid smashed into what is now Mexico’s Yucatan Peninsula and triggered cooling temperatures that wiped out the dinosaurs, researchers said.

The time between the asteroid’s arrival, marked by a 110-mile-(180-km-)wide crater near Chicxulub, Mexico, and the dinosaurs’ demise was believed to be as long as 300,000 years.

The study, based on high-precision radiometric dating techniques, said the events occurred within 33,000 years of each other.

The theory that the dinosaurs’ extinction about 66 million years ago was linked to an asteroid impact was first proposed in 1980. The biggest piece of evidence was the so-called Chicxulub (pronounced “cheek’-she-loob”) crater off the Yucatan coast in Mexico.

Renne and colleagues reanalyzed both the dinosaur extinction date and the crater formation event and found they occurred within a much tighter window in time than previously known. The study looked at tektites from Haiti, tied to the asteroid impact site, and volcanic ash from the Hell Creek Formation in Montana, a source of many dinosaur fossils.

About 1 million years before the impact, Earth experienced six abrupt shifts in temperature of more than 2 degrees in continental mean annual temperatures, according to research cited by Renne and his co-authors.

Begin by thinking critically about what claim the author is trying to get you to accept: The author wants me to believe . . . that dinosaurs died out 66 million years ago after a period of climate change and then a meteorite impact.

Authority: Is the information coming from someone with authority on the topic? To answer this question you would have to dig a bit to find out more about the authors, but the paper has been published in Science by authors with degrees in geology. So, the author is using a source that does have a degree of authority on the topic.

Starting Points: Does the author have a biblical worldview or a humanistic worldview? Clues in the article point to a humanistic worldview as the starting point. First, dates that are far outside the biblical age of the earth are given as fact. Second, there is no mention of God or the Bible as a source of truth or an attempt to compare what was stated to the Bible.

Know: How does the author know the things he claims to be true? The conclusions come from an analysis of radiometric and climate data. The article claims that six shifts in global temperature of more than two degrees happened across 1 million years more than 66 million years ago. This is an example of an interpretation of data, not observational evidence. No one measured the temperatures with a thermometer—they were interpreted from the actual observations, they are not data themselves. It seems quite unreasonable that such accurate temperatures could be determined, and the analysis is based on uniformitarian assumptions that are unbiblical and unconfirmable. Sorting data from interpretations is an important part of evaluating truth claims. Another interesting aspect is that the article claims that the new window of time was much tighter than “previously known.” So what was known before is no longer known, demonstrating the spurious nature of what is actually known about what happened “millions of years ago.”

Final Analysis: This claim must be rejected even though the authors are authorities since the idea contradicts the Bible and is an interpretation based on faulty thinking.

Of Mice-like Critters and Men

A tiny, furry-tailed creature is the most complete picture yet as to what the ancestor of mice, elephants, lions, tigers, bears, whales, bats and humans once looked like, researchers say.

These new findings also suggest this forerunner of most mammals appeared shortly after the catastrophe that ended the age of dinosaurs, scientists added.

From all this data from living and extinct mammals, the scientists extrapolated the appearance of the most recent common ancestor of all placental mammals.

“We have all these placentals alive today, from elephants to shrews, from things that fly to things that swim,” Spaulding said. “What could the common ancestor of these things that are so different possibly look like?” The scientists then worked with an artist to illustrate this ancestor. 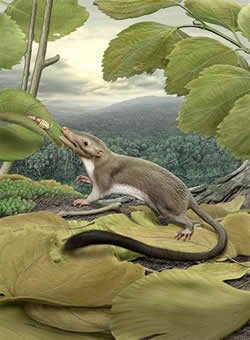 In brief, the author wants us to believe that all placental mammals came from an ancestor that looked like this picture. Let’s ASK some critical thinking questions.

Authority: The article mentions a team of top-notch scientists with expertise in their fields.

Starting Points: The author and researchers clearly have a humanistic worldview, rejecting the biblical explanation of the origin of living things, including humans.

Know: The picture and recreations are not based on actual observations, but a blending of molecular analysis and comparisons of fossils that are put into a beautiful picture through the mind of an artist. Notice phrases in the article that demonstrate a lack of concrete knowledge, such as these: “speculate on the appearance,” “may have looked like,” “much remains controversial,” “fossil evidence suggests,” “genetics research suggests,” “possibly look like,” “the researchers suggest,” and “supports the notion.”

Final Analysis: This idea must be rejected because the ideas contradict Scripture and the conclusions are based on speculation of evolutionary relationships with a sprinkle of artistic flourish.

The next time you check the headlines in your news feed, take some time to practice this framework. Read through the article and assess the claims while you think critically and ASK questions. Then, take the time to teach it to someone else.