Building up the Arsenal

Some time ago, a secular reporter accused me of promoting violence. It was because he saw AiG’s classic “castles illustration” we often use, which really sums up the spiritual battle AiG is fighting.

The two castles illustrations are labeled “Problem” and “Solution.” Notice the use of cannons on the castle. Now, I wonder what the same reporter might say if he saw some of the newer diagrams I use in my talks—today I’m using missiles! 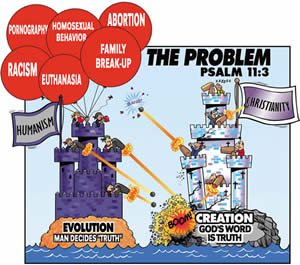 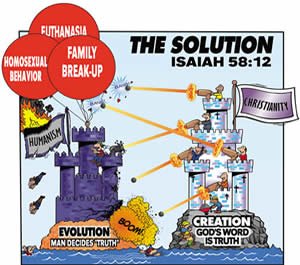 In reality, what I’m doing with such illustrations is similar to what the apostle Paul did, as we read about in the Bible. He often used military language as he described the spiritual battle Christians are in. For instance, consider these passages from God’s Word, penned by Paul:

Therefore take up the whole armor of God, that you may be able to withstand pin the evil day, and having done all, to stand. Ephesians 6:13

The night is far spent, the day is at hand. Therefore let us cast off the works of darkness, and let us put on the armor of light. Romans 13:12

by the word of truth, by the power of God, by ithe armor of righteousness on the right hand and on the left 2 Corinthians 6:7

For the weapons of our warfare are not carnal but mighty in God for pulling down strongholds. 2 Corinthians 10:4

But let us who are of the day be sober, putting on the breastplate of faith and love, and as a helmet the hope of salvation. 1 Thessalonians 5:8

I liken the “missiles” fired by AiG as attacks on evolution’s own “missiles,” including its teaching of millions of years. I call ours “Christian Patriot Missiles.” They are designed to counter the secular humanists’ attacks on Christianity.

And what are AiG’s “missiles” of defense? They are our various Christianity-defending resources: the AiG website, our books, DVDs, curricula, CDs, Answers magazine, , seminars, radio programs, etc.

Because Christians are engaged in a battle, they need a continual supply of “ammunition”—plus newer advanced “weapons” to counter the enemy’s attacks and their everchanging strategies against God’s Word. To that end, AiG (often in close cooperation with our publisher Master Books) produces new “ammunition” each year.

Already in 2008, AiG has added quite a number of resources to its arsenal—items such as:

We need to be reminded that as Christians, we’re in a war. But as Paul states in Ephesians 6:12, “We do not wrestle against flesh and blood, but against principalities, against powers, against the rulers of the darkness of this age, against spiritual hosts of wickedness in the heavenly places.”

As we understand the cutting-edge spiritual battle raging today in regard to the authority of Scripture, I trust you and your family will continue to obtain vital “ammunition” from AiG’s powerful “arsenal.” In this way, “by them you may wage the good warfare”—as was told by Paul to Timothy (1 Timothy 1:18).

Previous Article Discernment Lacking Next Article How Many Doors?