One Race One Blood

It didn’t take long for Darwin’s “fruit” to begin to ripen. Nowhere has this been more obvious than in the area of racism.

God is not mocked, whatever a man sows, this he will also reap.

Ideas are like seeds. They might seem small; they might seem insignificant; they might even go unnoticed by all except those who hold them in the moment. But let there be no doubt: both ideas and seeds are incredibly powerful. From seeds dropped in fertile ground grow the mighty oaks that anchor the land, altering the course of the rivers and wind. And from ideas planted in the fertile soil of the human mind grow the thoughts and convictions of mankind, altering the course of history for the world and the individual.

In the mid-1800s, as the sailing ship Beagle cut through the oceans, a theologian and amateur biologist was formulating an idea. Without the insight of modern-day genetics and supported by superficial observations, his ideas began to solidify into a theory: the theory of evolution. In his history-altering book, The Origin of the Species, Charles Darwin conceptualized a world where life spontaneously came into being and then changed over time by the forces of nature into the phenomenal complexity and diversity of life we now see on this planet.

Like a seed, the idea was firmly planted in Charles’s mind, where it began to grow and mature. Through his writings and lectures, the seed then became planted in the minds of others. Soon the theory had taken root in the gardens of the scientific community. Blown by the winds of society, the idea of evolution found its way into the fields of the education systems of the young. Its seeds spread into the laws of government. Soon enough, its roots began to infiltrate the mind of the Church, where it began to choke out the faith many held in the Word of God. In time, this single idea overtook almost the entire garden of Western thinking.

It didn’t take long for the fruit of this garden to begin to ripen. Nowhere has this been more obvious than in the area of racism. While Darwin himself probably never imagined the impact his idea would have on the culturally diverse peoples of the earth, history has shown us how evolutionary thought fuels racism and how racists use evolution to justify their hatred for those who are different than they are.

In the pages ahead, we will explore the tightly knit relationship between Darwinian evolution and racism in all its forms. Historically, scientifically, and (most important, of course) biblically, we will seek answers to the perplexing and devastating cultural problem of racism.

Evolutionists like Hitler treated the Jews, Gypsies, and other groups as inferior. He therefore argued that they needed to be eliminated. Today, depending on the country, marriages between different people groups often result in persecution for the parents and the children. Current attempts at “ethnic cleansing” are the result of hatred of one particular people group toward another. Even within segments of the Church, intense prejudice can be seen toward those whose skin is of a different shade.

All of these problems and many others concerning racism and prejudice could easily be solved if new seeds of truth from God’s Word (properly interpreted alongside scientific fact) were planted and cultivated in our minds. To that end, I’ve asked Dr. A. Charles Ware to join me in the writing of this book. Charles is an international life coach on race/ethnic reconciliation matters. Since 1993, he has spearheaded nearly ten national Multicultural Ministry Conferences and has served on the Race Relations Advisory Team for the Hudson Institute. Dr. Ware currently serves as Executive Director of Grace Relations and Special Assistant to the President of The College of Biblical Studies, gaining national recognition as leaders modeling multicultural ministry. He lives in Indianapolis, Indiana, with his wife, Sharon, and six children. God has blessed us with a wonderful friendship and a common vision for the message of our ministries.

In chapter 1, “Darwin’s Garden,” we examine the fruit of evolution with respect to racism. Racism has shown its ugly face throughout the ages—a consequence of sin and the Fall. From continent to continent, we see sad examples of what happens when man’s thinking replaces biblical truth and how racism has been fertilized by the theory of evolution.

Chapter 2 brings racism into the 20th and 21st centuries. Dr. Ware will reveal the history of scriptural abuse and misuse that has been used to justify, support, and propagate racism while bringing light to the plight of minorities. Sadly, the discussion must also take an honest look at the Church, where evolutionary thinking and racism share common roots. These roots go deeper than you might think. Several years ago in Australia, I was having a conversation with a Bible college student. He declared that missionaries should not waste their time preaching to the Australian Aborigines. He believed they were not of Adam’s race and, therefore, could not be saved. His attitude was not unusual. Over the centuries, some missionaries have not seen the need to take the gospel to “primitive” tribes because they are not considered sufficiently “human” on the evolutionary scale.

One professor in the 1880s wrote: “I consider the Negro to be a lower species of man and cannot make up my mind to look upon him as ‘a man and a brother,’ for the gorilla would then also have to be admitted into the family.”1 Too many in the Church have failed to take God at His word and have instead injected humanistic and evolutionary thinking into their worldview and morality. The seemingly insignificant seeds of Darwinism are now spreading across our land, multiplying themselves as they go.

For they sow the wind and they reap the whirlwind (Hosea 8:7).

The scope and the intensity of the racism/Darwinism relationship are dark and discouraging. More than half a century has passed since the horrors of the Nazi racial extermination camps were revealed to a disbelieving world. Yet the battle against ethnic hatred and violence remains one of the burning issues of our time. Billions of dollars are spent fighting it. Oprah devotes entire programs to it. Presidents consult civic and religious leaders for answers. Everyone seems to be wrestling with the problems of racial prejudice . . . yet solutions evade us.

Is the continued spreading of Darwin’s garden unstoppable? I say no. In this book we will bring great hope and light through scientific and biblical fact. In the brilliant light of God’s Word, the roots of Darwinian evolution and racism will be exposed . . . and in that light, the roots will begin to shrivel.

In chapter 3, “The True Origin of Species,” I’ll give you an overview of genetics, natural selection, and the theory of evolution. You’ll see how the scientific facts match up with biblical revelation, a revelation that destroys the possibility of Darwinian evolution and uproots the weeds of racism. In chapter 4, “Humankind,” we will apply biblical and scientific principles to humanity. You’ll discover the genetic foundation behind the diversity that God has given us. It’s not only a fascinating look at the way that God created us, but it also reveals the shallowness of Darwinian theory and evolutionary thinking in regard to racism. In chapter 5, “One Blood,” we’ll reveal what the word race truly means. Are there really multiple races of humans? Where did this concept originate? The answers will change the way you look at yourself and those around you forever. By exploring the personal implications of the evidence on a heart level, you’ll begin to experience the truth of God’s Word in new ways. In chapter 6, “One Flesh,” we will apply biblical and scientific principles to marriage and dating relationships to reveal God’s plan for families from differing cultural backgrounds.

In chapter 7, “Grace Relations,” Dr. Ware begins to unveil a dream for the future—a vision for the Church and society built on grace and unity rather than on racial hatred and division. His vision is acute; his plan is reasonable. In chapter 8, “New Seeds,” he will show the way into a new relationship with each other that transcends race and embraces grace in a living reflection of the fact that we are all one in Jesus Christ.

Following this chapter, Dr. Ware presents several extremely useful appendices. In appendix A, Dr. Ware will show how the homosexual movement has hijacked the civil rights movement. By using similar rhetoric and strategies, they are attempting to draw false parallels between their struggles and those of African Americans. By building their case on evolutionary thinking, the homosexual movement has falsely aligned itself with the struggles of the civil rights movement. It is another consequence of the spread of Darwin’s garden, but under biblical scrutiny, Dr. Ware will pull these false parallels out by the roots.

In appendices B, C, and D, Dr. Ware will supply us with several highly practical tools for implementing a strategy to create multi-ethnic communities of worship and fellowship. By the time we are done, you’ll not only know the history, theology, and science regarding evolution and racism, but you will also be equipped to do something about it in your own personal life, in your church, and in the world!

Ideas are like seeds, small and yet incalculably powerful. Darwin’s garden continues to grow, fertilizing the roots of racism. As believers in Jesus Christ, using the truth of His Word as our tools, we have the opportunity to root out the assumptions of Darwinism and plant new seeds of truth from God’s Word and scientific fact. A new garden can be planted and nurtured—but this time the fruit will not be racism; it will be love and unity in the name of Jesus Christ.

Let us not lose heart in doing good, for in due time we will reap if we do not grow weary. So then, while we have opportunity, let us do good to all people (Gal. 6:9–10; em- phasis mine).

One Race One Blood 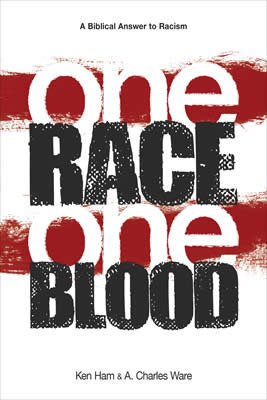 Most people do not realize how intimately connected the popular idea of evolution and the worst racist ideology in history are.