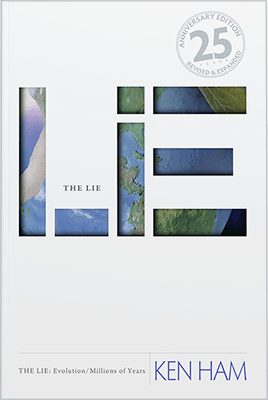 Ken Ham is best known for his message on the relevance of creation and the importance of Genesis. Humorous and easy to read, this book powerfully equips Christians to defend the book of Genesis and opens eyes to the evil effects of evolution on today's society.

Buy the revised, expanded, and updated edition, written for the special 25th anniversary year! It's message of biblical authority is even more relevant today.

. . . that in the last days false teachers will introduce destructive lies among the people. Their purpose is to bring God's truth into disrepute and to exploit believers by telling them made-up and imagined stories (see 2 Peter 2:1-3).

Such a Lie Is Among Us—That Lie Is Evolution!

Today many laypeople, ministers, and Christian educators are powerless in their presentation of the gospel. They have rejected Genesis, the foundation of biblical doctrine. They have believed the 20th century origins myth—evolution.