The strength of a wolf pack isn’t its numbers or the fear it inspires.

The running pack dodges fallen branches and sturdy tree trunks in the crisp, cool night. The moon lights the way as they dance forward, almost as one. And then the howling begins.

A wolf pack’s howl can strike terror in a lone traveler’s heart. But in spite of our fear—or maybe because of it—human beings have been fascinated with wolves for thousands of years. You’ll find them throughout the Old and New Worlds and their stories. From Fenrir of Norse mythology to Lupa of Roman fame to the Big Bad Wolf, wolves appear prominently in cultures around the globe. Since sometime after Adam’s Fall into sin, that howl has signaled danger to mankind, so it makes sense that wolves would often be the bad guys in fables and legends. But of all the wild animals, what specifically about wolves sparks human imagination?

The most fascinating, and often misunderstood, characteristic of gray wolves is their packs. We often hear of the “alpha male,” who fights his way to the top and leads the pack with an iron paw until another wolf takes him down. But that idea is mostly a myth. God designed wolf packs as family groups, and affection binds them together more often than brute force and intimidation. 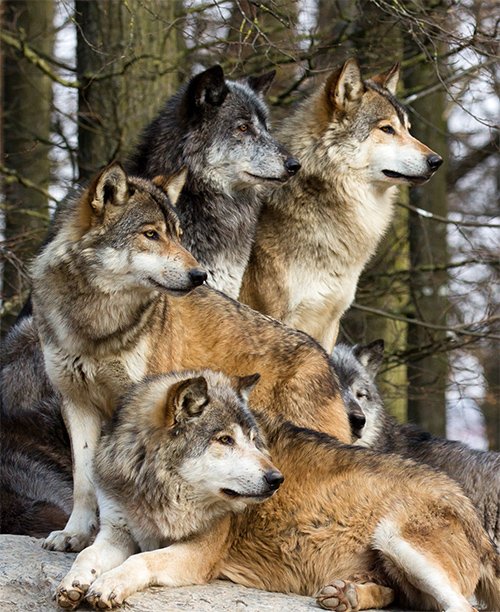 Contrary to popular belief, wolf packs are family groups, bound together by affection instead of fighting for dominance.

The mother and father of the pack mate for life and are the sole parents of the other pack members. The adult offspring either stay with the pack and take leadership when one or both parents die, or they go off and start their own pack.

Next are the pups. Though the breeding female is their primary caregiver, once pups turn one month old, each grown member of the pack helps feed and watch over them. By the time they are eight months old, the pups will join the rest of the family on their first hunting trip.

Scent is the most common form of communication between different packs. Wolves mark the edges of their territory with urine, warning off other packs and lone wolves. They also have special scent glands on their tails and between their toes. Each wolf has its own unique scent, so if one goes missing, the pack can smell out the footprints to find it.

Also vital to pack communication are a wide variety of vocal sounds. The best known is a howl, since this distinctive sound travels the farthest. A wolf can hear a pack’s howl up to 10 miles away across the open tundra. It may sound scary, but a pack never howls to frighten prey (or people). Howling expresses solidarity as the pack gathers for a hunt, mourns a dead member, or claims territory.

But wolves don’t only howl. They will bark to warn the others of approaching danger. They will growl and snarl to threaten or defend against encroaching packs. And they will whine and whimper during playtime or when they’re feeling anxious.

The most recognizable form of communication, at least to any dog owner, is a wolf’s body language. Nearly every aspect of body language is an expression of mood or personality. When excited or curious, wolves stand tall, tail held high, with their ears forward. They display affection to their pack mates by nuzzling or resting their heads on one another.

If a wolf is in trouble or feeling ashamed, it will often keep its tail between its legs and its ears flattened against its skull. Why would a wolf be ashamed? When a young wolf lets the pack down during a hunt, for example, by leaping impulsively before the right moment, it’s time to apologize.

Body language is vital. It signals the difference between playing and fighting. Are those two adolescents practicing their hunting skills or honestly trying to hurt each other? When combined with sounds—whimpering during play and growling during a fight—the same action can come across as radically different. Context is key.

A wolf pack is a complicated, dynamic network that protects the wolf from the dangers of a fallen world. Even in a cursed creation that includes predators and death, our Creator highlights the value of relationships. He designed these beautiful creatures with communication skills to keep the pack unified from day to day. Wolves are stronger as a group, a truth repeated in every howl. 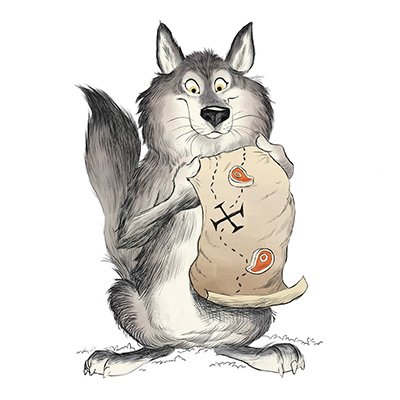 Wolves bury their leftovers, leaving food packets all across their territory to save rations for when food is scarce.

Wolves don’t actually howl at the moon. Although many people have speculated about it, no one knows where this common misconception comes from.

Wolves can eat up to 20 pounds of food a day yet go without food for up to two weeks with no ill effects.

When a wolf pack is howling together, even pups will join in, though they must learn when it’s time for the song to end. 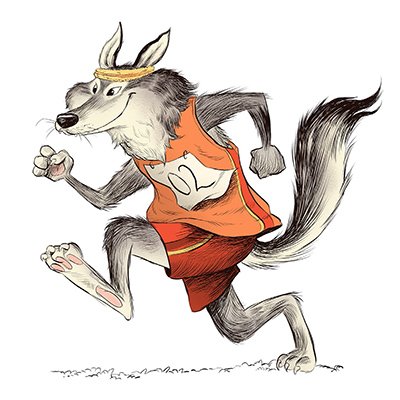 Heather Brinson Bruce earned dual degrees in English and chemistry from Clemson University. She writes for Answers magazine as a freelance author.
Next Article Out of the Blue—Animal Color