Out of the Blue—Animal Color

When you visit the beach, your eyes take in many wonderful sights—the clear blue sky, waves breaking on the shore, red crabs, green beach grass, and brown sand. One thing you aren’t likely to see, however, is a woman jogging along the boardwalk with a blue dog at her side, or a blue seagull flying overhead.

While some flowers and foods are blue, such as bluebonnets and blueberries, blue is rare among animals. Most animals are unable to make blue pigments (with a few eyecatching exceptions). Often the blue color comes from specially designed features that bend the sun’s light—like a prism—to bring out the blue.

These animals’ ability to take advantage of the laws of physics and chemistry showcases the genius of their Creator, who gave his world a blue backdrop and then added splashes of color to liven up the panorama.

Most animals are incapable of making a blue pigment, for various reasons. But some can. It seems that the Creator wanted us to recognize that blue is on his palette, too, when it serves his colorful purpose.

As the blue morpho butterfly flutters around, onlookers are awed by its brilliant blue. In reality, this creature and many others aren’t actually blue. They have sophisticated body designs to bend sunlight like a prism, making them appear blue to our eyes.

Blue jays are hard to miss. If you spot one, you’re likely to point it out. This sassy bird produces dark-colored melanin, meaning it should technically appear almost black. However, tiny air pockets in the bird’s feathers refract the white light like a prism. The red and yellow wavelengths cancel each other out, and blue wavelengths are reflected and reinforced, making it appear blue to our eyes. 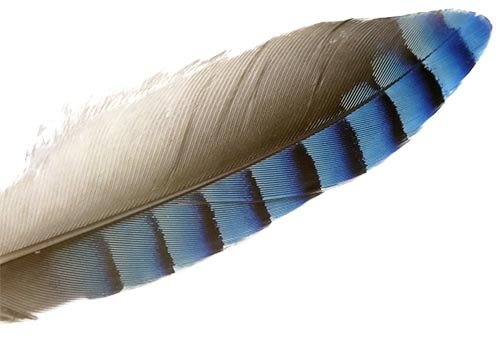 Found in the waters of the Indian and Pacific Oceans, the blue starfish, or sea star, is one of very few creatures with blue pigment. Its striking blue color often attracts predators. But if a creature eats one of its arms, the Creator gave the blue sea star the ability to just regenerate a new blue limb. 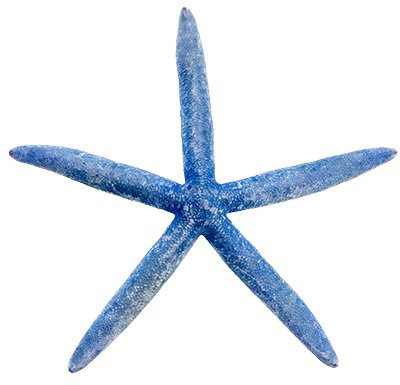 The more sun the blue agama lizard soaks up in the African desert, the faster it can run. But speed isn’t this creature’s only ability. While mostly brown, male agamas turn blue during mating season. This shows the dull-colored females who among them is a male. If a predator shows up during this time, the bright color isn’t a problem—males simply lie flat against rocks and completely lose their bright blue color. 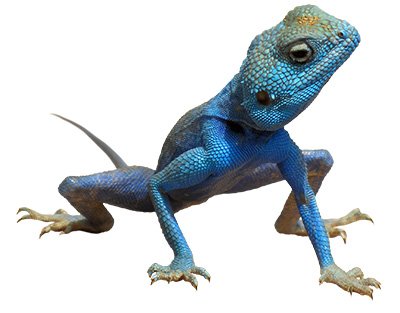 This butterfly displays one of the most vibrant blues in all of creation. Its shiny, metallic blue is not from pigment, however. Rows of microscopic scales on the back of its wings refract the sunlight so that blue wavelengths shine back at certain angles. As its wings move in flight, it has a flashing defense of sorts. The constantly changing angle makes them appear to flash from vivid blue to dull brown. The butterfly alternately disappears against the jungle background and then reappears. This “now you see me; now you don’t” ploy allows the blue morpho to confuse predators while glorifying the Creator with its stunning beauty. 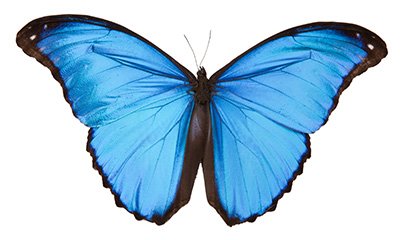 The blue dragon sea slug rarely grows larger than an inch and a half (4 cm) long. This delicate creature floats on its back, exposing its bright blue underbelly to the sun so that it blends in with the blue ocean. To anything looking up from below, however, it presents a dull, silver-gray backside to match the gray sea surface as seen from that angle. The Creator provided the blue dragon with blue pigment to protect it from the sun’s harmful ultraviolet rays as it spends most of its life floating on the surface. 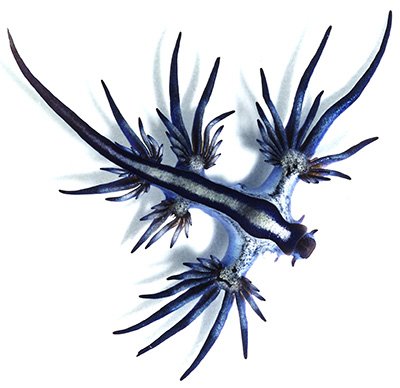 These little frogs stand out because of their beautiful blue color, which is generally darker on the limbs and belly and overlaid with black spots or patches on the head and back. Although poison dart frogs sport a wide range of flashy colors—yellows, oranges, reds, greens, and blues—they aren’t just big show-offs. Those Technicolor designs warn potential predators, “I’m toxic; don’t eat me.” Since their coloring comes from pigment, they’re blue from every angle. 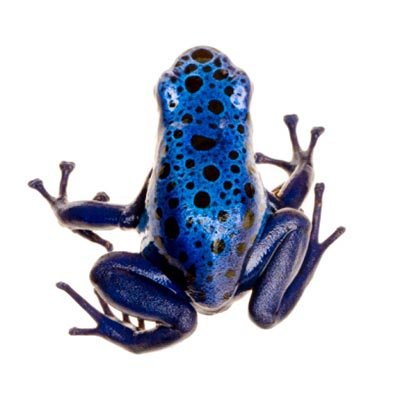