Atheists Down Under Are Worried!

Do atheists have beliefs? Of course they do!

Atheists believe that matter arose by natural processes. Can they prove this? Not at all!

Atheists believe the universe, all life, the laws of nature, and laws of logic arose by natural processes. Can they prove this? Of course not, but they believe it to be so.

Atheists believe they cease to exist after they die. Can they prove this? No, but they believe this is what happens.

Atheists believe no God exists. Can they prove this? Not at all—it’s their belief.

1. a : the state of a religious <a nun in her 20th year of religion> b (1) : the service and worship of God or the supernatural (2) : commitment or devotion to religious faith or observance

2: a personal set or institutionalized system of religious attitudes, beliefs, and practices

4: a cause, principle, or system of beliefs held to with ardor and faith

Even though he has not labeled himself as such, Bill Nye, for all intents and purposes, is a practicing atheist. Look at this short video clip as I was speaking to him recently at the Ark Encounter where he admitted to believing life arose by natural processes—he has a belief, a religion. Atheists have a “system of belief held to with ardor and faith.” Atheists are very religious people.

Now, in the United States, atheists have conducted a propaganda campaign to try to brainwash the public into believing that people who believe in God are religious, but those who don’t believe in God are not religious. Because of this atheist propaganda, many have been indoctrinated to believe that when secularists get the Bible out of public schools, or crosses and nativity scenes out of public places, they removed religion so the situation could be neutral. However, the reality is that these secularists have imposed their atheistic religion on the schools and culture in general. As Jesus taught: “He who is not with Me is against Me, and he who does not gather with Me scatters.” (Luke 11:23) There is no neutral position. No person has no religion—everyone has a religion, and ultimately it comes down to those who are for the true God and those who are not.

Now atheists from Down Under have been desperately trying to convince people in Australia that they have no religion.

Tuesday, August 9, is Census Night in Australia (though people have several weeks to complete it). Every five years, all Australian citizens are required to fill out the census form. As in America, census results help the government figure out where and how government funds are allocated. These allocations can seriously impact Christian organizations such as Christian schools, charities, chaplain offices, and other religiously affiliated organizations.

Of particular concern is question 19, which is the only optional question on the census form. This question is the religious identity question. Several different options are available, including six Christian denominations as well as Islam, Hinduism, and Buddhism. There is also an “other” category to mark, and then additional information needs to be supplied in a text box. But what makes this question stand out is that “no religion” is the first option to choose from. Now this is absurd, because no one can claim they have no religion! So that option should be totally deleted from the census form. 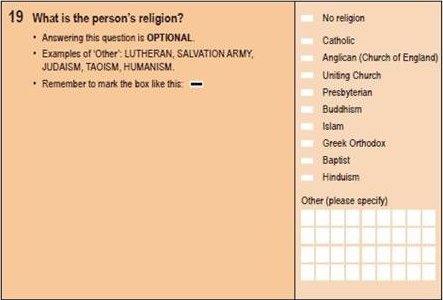 However, according to the Canberra Declaration newsletter,1 the reason why this choice occurs first is that the Atheist Foundation of Australia lobbied for it three years ago. It’s possible that some people may select this box simply because it appears first, especially if they are hurrying through the form or if at first glance they don’t see their own religious affiliation listed. This would be detrimental to religious organizations, as government subsidies may be cut or diminished based on the answer to this question. But a religious affiliation is a totally different matter from claiming one has no religion anyway! As well as listing various denominations, Islam, and so on, atheism should be listed as the religion (as opposed to “no religion”) for those who choose this affiliation.

Much Campaigning about Nothing

In fact this potential cutting of government funding may be just the hope of the Atheist Foundation. In the weeks leading up to tomorrow’s census, the Atheist Foundation of Australia launched a “Mark 'No religion'” website and have been conducting an advertising campaign to encourage people to do so. Some of the tactics appear aimed at making “unsure” or “undecided” people use this option. There has also been an attempt by the Atheist Foundation of Australia to encourage teens and children to be counted as “no religion,”2 claiming that only adults can validly claim a religion. Of course, part of the atheist campaign is to try to indoctrinate young people in particular that atheists don’t have a religion. But young people need to understand that atheism is a religion—and it’s a religion of purposelessness, meaninglessness, and hopelessness.

The “other” box on this form has also been gaining momentum among some segment of the population. Apparently there has been an increase in the number of “Jedi” in the past few censuses.3 Ironically the aforementioned Atheist Foundation is trying to get people to quit claiming Jedi as a religion, as they claim it will falsely inflate the undefined religion category at the expense of their false idea of no religion. Apparently “the Force” is not strong with them.

Atheism is a religion. It’s a religion which explains life without God.

But when you really stop to think about it, why is there such a push by the Atheist Foundation of Australia for marking the “no religion” box? To get the “no religion” box put at the very top seems like it should be satisfaction enough; but no, an all-out media blitz has been (and still is) underway. As we’ve pointed out many times before, atheism is a religion. It’s a religion which explains life without God. As mentioned here (and outlined above), one definition of religion is “a cause, principle, or system of beliefs held to with ardor and faith.” Yes, atheism qualifies as a religion!

Furthermore, why should the Atheist Foundation even care? In an atheistic worldview, when you die that’s it (or as Bill Nye said at the Ark Encounter, “When you die you’re done”). There is no ultimate basis for morality, for life, or even for logic. And although Bill Nye falsely claims that he arrived at his belief in atheism (and life by natural processes) based on the evidence,4 why should he trust his senses anyway? What gives him the basis for accepting what he perceives as reality? What makes his interpretation of the evidence right and a creation scientist’s wrong?

Ultimately, to the Atheist Foundation of Australia, what difference should it make if one set of chemicals wrapped in a blanket of skin believes something different from another? In their worldview, our brains are just doing what the chemicals and electric impulses in them direct us to. They can’t even fall back on the relative morality of “what society decides goes” argument: at the last census (2011) only 22.3% claimed “no religion” as their option on the form.5 They also have to at least recognize that many of the religious organizations their strategy may impact are those that, even in an atheistic worldview, do good work. Homeless shelters, Christian-based hospitals, Red Cross centers, charities, and church food pantries all might be negatively impacted. So what does this show about their relative morality? It’s relatively worthless! And really what does it all matter in an ultimately fatalistic worldview?

Know What You Believe

In light of this atheist push in Australia (and in the United States, Canada, and Europe as well), we would encourage you to check out the atheism chapter, coauthored by Ken Ham and Bodie Hodge, in the soon-to-be-released World Religions and Cults Volume 3. This chapter looks at the secular humanistic beliefs of atheism, and the problems it has with producing any ultimate basis, meaning, or purpose for its existence. Atheism as a religion is discussed in detail in this volume.

But Christians know what we believe, have a firm foundation for that belief, and most importantly, have a sure hope for the future. As 1 Corinthians 15:22 states: “For as in Adam all die, even so in Christ all shall be made alive.” And that future is secure:

Now hope does not disappoint, because the love of God has been poured out in our hearts by the Holy Spirit who was given to us. For when we were still without strength, in due time Christ died for the ungodly. For scarcely for a righteous man will one die; yet perhaps for a good man someone would even dare to die. But God demonstrates His own love toward us, in that while we were still sinners, Christ died for us. Much more then, having now been justified by His blood, we shall be saved from wrath through Him. For if when we were enemies we were reconciled to God through the death of His Son, much more, having been reconciled, we shall be saved by His life (Romans 5:5–10).

But as it is written: "Eye has not seen, nor ear heard, Nor have entered into the heart of man The things which God has prepared for those who love Him." (1 Corinthians 2:9)