In God’s Word, we can read of a number of signs (or reminders) that help us never forget the truths of the Bible.

After Joshua led the Israelites across the Jordan River in that miraculous event, he found twelve stones and built a memorial, so that “this may be a sign among you when your children ask in time to come, saying, ‘What do these stones mean to you?’ Then you shall answer them that the waters of the Jordan were cut off before the ark of the covenant of the Lord; when it crossed over the Jordan, the waters of the Jordan were cut off. And these stones shall be for a memorial to the children of Israel forever’” (Joshua 4:6–7).

Joshua’s stones were to be a sign to remind future generations of what God had miraculously done for them so they would not forget.

In God’s Word, we can read of a number of signs (or reminders) that help us never forget the truths of the Bible. For example, the rainbow of Genesis 9:13 was established as a sign that God would never again judge the world with a global Flood. Also, in 1 Corinthians 11, the cup and the bread were established as reminders to Christians not to forget what Christ has done for us in salvation. 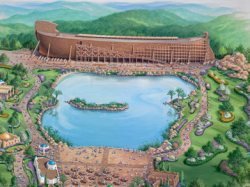 When God told Noah to build an Ark, it was meant to be a sign (or reminder) of three major things:

That God is Creator, and thus we are accountable to Him. This is why He has a right to judge our sin with the penalty of death. He is a righteous, holy God and thus has to judge wickedness.

That God is a God of grace. Noah’s Ark was built as an Ark of salvation. Those who went through the doorway were saved. In fact, even before man sinned (Genesis 3), God, from eternity, had established a way of salvation for man.

God keeps His Word. He established the rainbow as a covenant that He would never again judge the wickedness of man by a global Flood. However, God’s Word makes it clear (2 Peter 3) that He will create a New Heavens and a New Earth after a final judgment (by fire).

In that passage from 2 Peter, we read that people are going to “willfully forget” (i.e., deliberately reject) that there was a creation and a global Flood, and reject that God will keep His word concerning the coming judgment by fire:

For this they willfully forget: that by the word of God the heavens were of old, and the earth standing out of water and in the water, by which the world that then existed perished, being flooded with water. But the heavens and the earth which are now preserved by the same word, are reserved for fire until the day of judgment and perdition of ungodly men. (2 Peter 3:5–7)

AiG has stepped out in faith to rebuild Noah’s Ark. It too will be a sign—a reminder that:

God is Creator and thus we are accountable to Him. We are sinners under the judgment of death.

God keeps His Word. There will never be another global Flood, but there will be a final judgment—next time by fire. To be saved from the final judgment and its consequence of being eternally separated from God (because of our sin) in an eternal fire (Matthew 25:41), we need to be in the Ark of salvation: the Lord Jesus Christ.

In Noah’s day, the majority of people did not believe God’s warning about a coming Flood. The majority was wrong and was judged accordingly. Today, we live in an age when the majority of scientists mock the idea that there ever was a global Flood. Generations of young people are being indoctrinated to believe that the worldwide fossil graveyard is the record of millions of years of evolution. In reality, though, most of it is the graveyard of the Flood!

Our world needs a sign that shows millions of souls that God’s Word is true and that He offers a free gift of salvation in Christ. Our sign will be the building of a full-size Noah’s Ark in northern Kentucky. It will serve to engage non-Christians with the truth of God’s Word, and affirm the faith of all who believe that the words of Jesus are true!

Previous Article Beam Me Up! Next Article The Global Epidemic