The well-known international science magazine National Geographic mentioned the Creation Museum in the March 2015 issue, though not in a flattering way. The article, “The Age of Disbelief,” bemoans, “Skepticism of science is on the rise, and polarization is the order of the day. What’s causing reasonable people to doubt reason?” Although this article mocks those who do not accept conventional scientific interpretations—including biological evolution—what such an article shows is that Answers in Genesis and the Creation Museum are being noticed enough to put us in an international publication! But how accurate are the claims made in this article?

National Geographic sent a world-class photographer to the Creation Museum for two days to take photos of our exhibits. For the print edition of the magazine, only one of these photos was used. Under this glossy full-page photo of one of our Garden of Eden exhibits it says the following:

At the Creation Museum in Petersburg, Kentucky, Adam and Eve share Paradise with a dinosaur. Young-Earth creationists believe the planet was created with fully functioning adult humans less than 10,000 years ago. Science holds that Earth is 4.6 billion years old, that all life evolved from microbes, and that modern humans first appeared 200,000 years ago—65 million years after dinosaurs died out.1

The article seems to stage the debate as science versus uninformed belief. But the debate is not science versus belief—it’s one interpretation of the evidence versus another interpretation! The article itself actually hints at this later on when it quotes the editor of the journal Science: “Science is not a body of facts. . . . Science is a method for deciding whether what we choose to believe has a basis in the laws of nature or not” (40). Most people view science simply as a set of facts that can only lead to one conclusion. But this is simply not true. When we talk about science, we usually mean a method of looking at the data and drawing a conclusion from it. Sometimes this conclusion is straightforward and fairly self-evident. But the presuppositions of the researcher may determine how they interpret the evidence, especially when trying to understand how things happened in the past. This is because there are actually two different kinds of science. 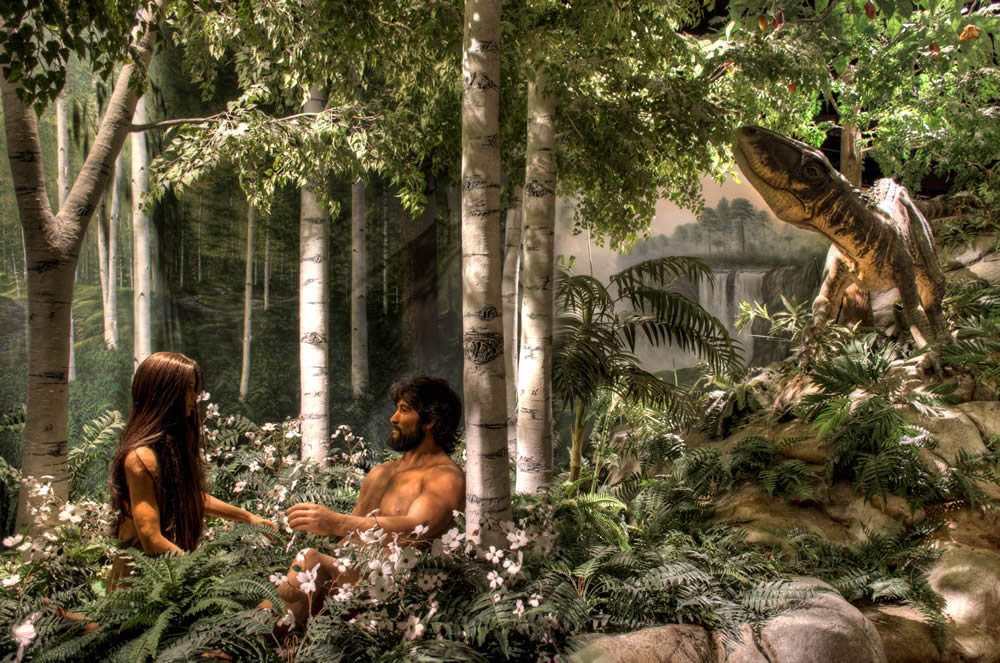 This photograph of a Creation Museum exhibit, similar to the photograph in National Geographic, depicts Adam and Eve in the Garden of Eden with a dinosaur.

Science can either be observational or historical. Observational science deals with the present and involves the use of the scientific method where a process or condition can be tested, observed, and repeated. It’s observational science that put man on the moon, developed vaccines, and made computers and cell phones possible. Historical science, on the other hand, deals with the past—things like the origin of life and the age of the universe. Since the past is now in the past we can’t directly test, repeat, or observe what happened. We can only observe what we have in the present. So what you believe about the past makes a huge difference in how you interpret the evidence in the present through historical science. The evidence doesn’t speak for itself; it must be interpreted.

Two Views of the Past

There are only two views about the past: man’s ideas and God’s Word. Secular scientists and, sadly, even many Christian scientists, start with man’s ideas about the past. By far the most popular version of man’s ideas about the past is evolution over millions of years. This evolutionary history begins with the theoretical big bang, which led to the evolution of stars and planets, continues through the evolution of Earth itself, and follows to the biological evolution of life on Earth. This history is written by fallible scientists, who weren’t there when these events happened, trying to understand what happened in the past. But the Bible contains an entirely different account of history. According to the Bible, God created the entire universe, including Earth and life on it, fully formed and functioning in six, literal, 24-hour days about 6,000 years ago. This original world was destroyed by a global Flood about 4,350 years ago because of man’s wickedness. Because they start with radically different ideas about the past, biblical creationists and evolutionists will reach entirely different conclusions when they examine the evidence. This idea is confirmed by Dan Kahan, a Yale researcher, who is quoted in the article saying that people “use scientific knowledge to reinforce beliefs that have already been shaped by their worldview” (44). This is as true of scientists as it is of the general public.

This article demonstrates the importance of worldview in science in a discussion of climate change. Achenbach, the article’s author, states that drastic and potentially devastating man-made climate change is a reality but that many people deny this. He also writes in his article that “scientists love to debunk one another,” but he then goes on to bemoan that, in relation to climate change, “the news media give abundant attention to such mavericks, naysayers, professional controversialists, and table thumpers” (41). Many of these “mavericks” are scientists who are just following the scientific process of falsification. Shouldn’t they be allowed to present their research without being labeled “mavericks” for simply disagreeing with the radical claims of some climate change scientists and government leaders? He is being hypocritical in his contention that scientists can and should continue to do research and debunk each other, but that they can’t do this if it goes against what Achenbach accepts as truth. The reason for this contradiction is because the battle is not over the evidence—it’s over the interpretation of the evidence!

The Worldview Battle Rages On

Achenbach then goes on to say, “Scientific results are always provisional, susceptible to being overturned by some future experiment or observation. Scientists rarely proclaim an absolute truth or absolute certainty. Uncertainty is inevitable at the frontiers of knowledge” (41) and “scientists can be as dogmatic as anyone else—but their dogma is always wilting in the hot glare of new research. In science it’s not a sin to change your mind when the evidence demands it.” (47). This is generally true unless, of course, you are overturning major tenets of biological evolution or the interpretation of millions of years in the rock layers. The article states, “ . . . evolution actually happened. Biology is incomprehensible without it. There aren’t really two sides to all these issues” (47). What Achenbach and many secular scientists are saying is that if you question evolution or long ages, then you aren’t a scientist regardless of your credentials or the quality of your research.

This highlights that the creation versus evolution debate is not about the evidence. It’s a battle between two differing worldviews. The predominant worldview in the scientific community is that of naturalism and materialism—only natural explanations involving matter and energy can be accepted as true. Many scientists will outright reject any interpretation of the evidence that doesn’t fit into their naturalistic beliefs, beliefs held with religious fervor. Because their naturalistic presuppositions automatically discredit any supernatural interpretation of the evidence for events like the origin of life, they discount the biblical explanation of such events from the past. Science is not an unbiased undertaking. What you believe about the past and whether you start with man’s word or God’s Word determines how you interpret the evidence.

They Have No Basis for Science!

Ultimately, there are only two worldviews. So which worldview, man’s ideas or God’s Word, best explains what we see in the world around us? Certainly God’s Word! In fact, in order for anyone to even be able to do science, the Bible has to be true. Without the Bible, it isn’t even possible to do science! You see, in order to do science we have to assume that the universe is logical and orderly and that the laws of nature and logic will operate the same way tomorrow as they do today. But in a completely material, purposeless universe (like evolutionists propose) why should there be any order and why should immaterial laws of nature govern an entirely material universe? In a naturalistic worldview, there is no reason why this should be!

But, when you start with the Bible, you get a completely different picture. The universe is not entirely material. Immaterial laws of nature and an orderly universe can exist because the universe is not random. It was purposefully designed by the Creator, the triune God of the Bible, who does not change (Hebrews 13:8; cf. Malachi 3:6) and who upholds the universe in a consistent manner (Genesis 8:22; Hebrews 1:3). Since He does not change, we should expect the creation that He upholds to remain orderly. In order to even do science, we have to assume the Bible is true!

Also, while this National Geographic article says “modern biology makes no sense without the concept of evolution” (35) and that “biology is incomprehensible without it,” what we know from biology actually confirms a biblical worldview and creates significant problems for an evolutionary one. For example, the law of biogenesis states that life only comes from life. Everything that we have ever observed in biology supports this idea—that’s why it’s a scientific law. And, yet, according to naturalistic biological evolution, life had to arise at least once from non-living chemicals. The evolutionary idea of the origin of life goes completely against what we observe in biology. But the law of biogenesis is perfectly consistent with a biblical worldview. Life came from the Life-Giver and therefore there never was a time when life had to arise from non-life. Scientific observations from biology confirm biblical creation—not evolution.

So Do Creationists Deny Science?

Creationists don’t deny science. We love science! Our Creation Museum is full of scientific ideas and applications, including high-tech animatronic dinosaurs! What we do deny is the worldview-based assumption that the universe and life are the result of chance, random processes over millions of years. Instead of starting with man’s fallible, changing interpretation of historical science, we start with God’s infallible, unchanging Word. And when we interpret the evidence through the lens of God’s Word, what we see in the world makes sense. Science confirms the Bible!