The simple answer is that the Bible does not tell us. All we know is that God intervened before the construction project was completed.

Studying the oldest buildings from the area, archaeologists assume the Tower at Babel looked like a ziggurat.

But we can’t just study later buildings and calculate backward. The people at Babel had a unique opportunity. The incredible engineering skills of all mankind were together in one place. But when God split them up, each family took their talents with them. So the later founders of Babylon and Egypt lacked the expertise of their forefathers.

Famous reconstruction by Leonard Woolly, who excavated at Ur. 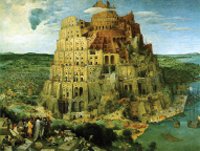 The Tower of Babel by Pieter Bruegel looked like the Roman Coliseum. 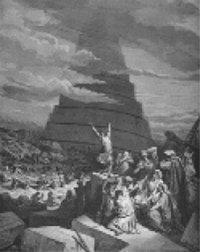 Gustave Dore’s engraving imitates the style of the Arab minaret at Samarra.

We can only imagine what their original plans looked like. Perhaps they designed an enormous city that would require a thousand years to complete. After all, they probably expected to live a thousand years, as people did before the Flood.

It is possible that they had unique construction materials available after the Flood. Thick layers of lime and other sediments may not have hardened. Perhaps these materials could be formed into bricks as strong as concrete blocks we make today.

If the plans at Babel were so grand, why don’t we find any remains today? It seems likely that God frustrated their work in the early stages, while they were still laying out the city and constructing brickworks.

Without much evidence to restrain them, the imagination of artists has run wild. Who knows, perhaps their fanciful designs are closer to the original than the speculations of archaeologists.

Reconstruction of the earliest ziggurat at Uruk (modern-day Warka).

The oldest Egyptian pyramid, the Step Pyramid of Djoser at Saqqara, resembles ziggurats built in the region of Babylon. 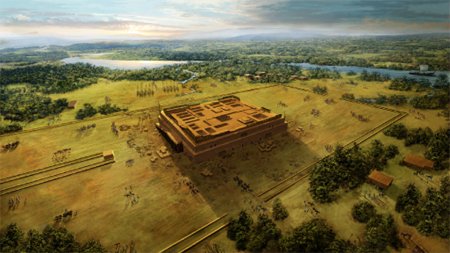 The Babel exhibit in the Creation Museum near Cincinnati depicts a city and tower that were abandoned in the very early stages of construction.

Previous Article The World in Revolt Next Article Egypt or Babel: Which Came First?