Stuck on Pause in Georgia

In a tentative victory for academic freedom in America’s public schools, a federal court yesterday sent back a lower court’s order that Cobb County, Georgia, schools remove textbook stickers that called evolution “a theory, not a fact.” A U.S. Circuit Court of Appeals, although not rendering a final decision itself on the sticker’s constitutionality, ordered that the previous decision be vacated and the case retried.1

Here is the text of the disclaimer in question—note that there is no wording that endorses biblical creation / intelligent design whatsoever:

“This textbook contains material on evolution. Evolution is a theory, not a fact, regarding the origin of living things. This material should be approached with an open mind, studied carefully, and critically considered.” 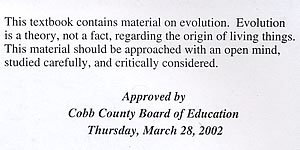 In January 2005, the suburban Atlanta school system was ordered by a U.S. District Court judge to remove stickers from the inside front cover of tens of thousands of biology textbooks (see the wording in the sidebar to the right). The judge argued that because the sticker questioned evolution, it “appears to be endorsing the well-known prevailing alternative theory, creationism,” and was therefore unconstitutional. The stickers were eventually removed (see our previous story, The Sticker Didn’t Stick (or Did It?)).

The 11th Circuit Court wrote that “some key findings of the district court are not supported by the evidence that is contained in the record.” Thus the case is remanded “to the district court in order for it to conduct new evidentiary proceedings and enter a new set of findings based on evidence in a record that we will be able to review. … [I]n this area of the law [i.e., the Establishment Clause of the First Amendment], the devil is in the details” (pp. 3–4).

Although the lack of evidence was the largest problem the Circuit Court of Appeals had with the judge’s ruling, there was also the Circuit Court’s comment that in the new trial, “it would be helpful if the court issued an entirely new set of findings of fact and conclusions of law,” suggesting that there was more than a technicality involved in why this case was remanded. In fact, the federal court listed 18 questions that the district court should consider when it deliberates the case again. (For the moment, it appears that the stickers will not be reapplied inside the textbooks.)

The sticker issue is far more important than how it affects one school district in America. If future federal courts re-trying this case also decide that such an evolutionary-questioning disclaimer is an establishment of religion (thus held to be in violation of the First Amendment), then any law that has any perceived religious basis may be subject to a challenge in the courts.

We have come to a point in American history when the creation movement is having so much success in showing people that there are grave problems with molecules-to-man evolution that some secularists want the courts and legislatures to protect it. The Cobb case is exposing this agenda. At the same time, it has ironically demonstrated that indeed there is a fight over a religious worldview in America’s science classes: a concerted attempt by evolutionary humanists to proclaim and defend their belief system against any comers.