‘What can be more curious’, he said, ‘than that the hand of a man, formed for grasping, that of a mole for digging, the leg of the horse, the paddle of the porpoise, and the wing of the bat, should all be constructed on the same pattern, and should include similar bones, in the same relative positions?’1

Darwin concluded that this similarity was, as he quoted Professor Flower, ‘powerfully suggestive of true relationship, of inheritance from a common ancestor’.2

But this still-common idea is not in the slightest a proof of evolution. It is simply an assumption by those who reject creation.

This idea that a fundamental similarity in structures is due to common descent is called homology. But this still-common idea is not in the slightest a proof of evolution. It is simply an assumption by those who reject creation.

Darwin revealed this was his position when he said some believe ‘that it has pleased the Creator to construct all the animals and plants in each great class on a uniform plan’. He finished that sentence by saying, ‘but this is not a scientific explanation.’3 He was therefore ruling out the possibility of creation based on a common plan by implying it was not scientific, so he wouldn’t believe it whether it was true or not.

In many cases what are called homologous organs are produced by the action of different genes.4 For example, you could change by mutation the gene that governed the development of the alleged ancestral vertebrate forelimb a million times and never produce, say, a seal’s flipper or man’s arm. Their development is controlled by different genes.5 (See ‘A serious problem for homology’ also in this magazine.)

Even similarities among somewhat similar creatures reveal that the differences are more important than the similarities. For example, look at the hands of four primates: tarsier, gibbon, chimpanzee, and human. Despite the similarities in their hands, the differences are what makes each most suitable for its way of life. The tarsier leaps and clings, and has large finger pads to help it do this. The gibbon swings from the trees, so has long, strong fingers for swinging. The chimpanzee may be able to manipulate very crude tools with its stubby thumb, but the human’s thumb faces the forefinger, which provides dexterity for countless purposes—from threading a needle to mountain climbing…from carving wood to buttoning a shirt.

So-called homologous structures are no proof of common descent, so are no proof of evolution. Darwin’s approach—to reject the creation explanation as unscientific because you don’t want to believe it—is not rational. This is particularly so when the facts are readily explained as the product of a Designer who created each unique structure to fulfill a different purpose. 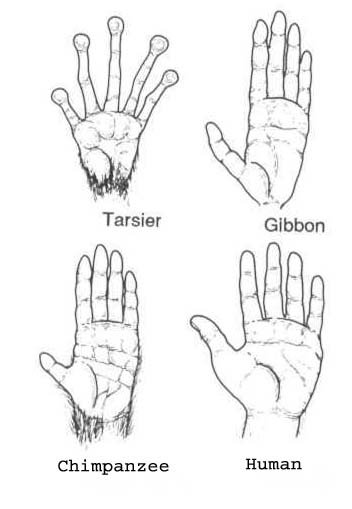