During the long, hot summer, lakes are abuzz with activity. Darting here and there is a tiny, easily overlooked insect—the dragonfly. Despite his humble appearance, he has become a source of increasing fascination to engineers like me. 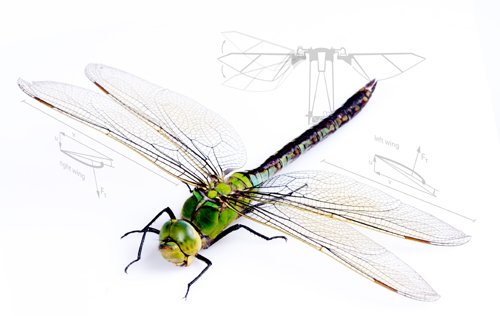 Why are dragonflies so interesting? Dragonflies are capable of amazingly agile maneuvers, including flying backwards and sideways. They are also fast—some species can fly at over 30 mph (50 km/hr). A dragonfly’s two sets of long, beautiful wings flap typically 30 times per second.

For reasons like these, aerodynamics engineers like myself are looking for ways to imitate their flight abilities.

Since we already have airplanes and helicopters, why do we need to find another way to fly? The answer is simple. Flapping MAVs (micro air vehicles) can potentially do a better job at many specialized tasks, when big, clunky vehicles aren’t appropriate. Applications include search and rescue, traffic monitoring, and reconnaissance. Even though engineers can build miniature helicopters, insectlike flapping has big advantages. Compared to a mini helicopter, insect flight is quieter and more efficient. A micro air vehicle can also be camouflaged to look like an insect, which is why the military has invested millions of dollars in its development.

How Does a Dragonfly Fly? 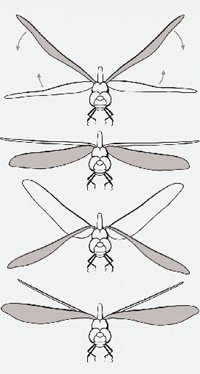 A bird, a plane? . . . No, it’s a dragonfly! Unlike a plane, dragonflies have flexible wings. And unlike birds, they have two sets of wings. These two sets of wings flap and twist in a different sequence, creating a unique, efficient motion that aerodynamic engineers are trying to imitate.

A prototype of a flapping micro air vehicle (FMAV) has been designed and tested at Bristol University by the author, Stuart Burgess. It weighs less than 1 ounce (20 g), with nuts smaller than a pinhead. Assembling these tiny components requires special equipment, such as magnifying glasses and precision tweezers.

The wings have a span of approximately 6 inches (15 cm) and can flap up to 10 beats per second. Powered by a mobile phone battery, the wings can flap for around 5 minutes. 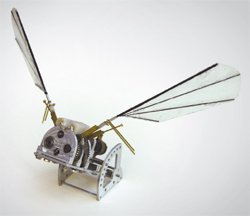 While the benefits are substantial, the technical challenges are as well. Insect flapping is more complicated than bird flight (although hummingbirds possess a few similarities). During flapping, birds do not twist their wings much, but dragonflies do. Picture it like this: hold out your arms and flap your hands up and down. That’s essentially all a bird has to do. Now, while flapping, tilt your hands side to side. This twisting forms a vortex (tiny whirlwind) that creates high lift forces on the wing, which is necessary to keep a dragonfly aloft.

Engineers have developed clever ways to simulate that sort of simultaneous flapping and twisting using precision instruments and motors. However, they still struggle to achieve the efficiency and reliability of a dragonfly.

I have personally led a research team to build an MAV in a major research program in the UK.1 We studied dragonflies using high-speed cameras and copied their wing motion in detail. It was a truly humbling experience to seek to understand the incredibly intricate and precise design of the dragonfly.

According to the idea of evolution, dragonflies are “primitive” creatures. Yet their incredible design continues to stump the best engineers in the world, who are unable to invent anything as advanced. The marvelous design of the dragonfly reveals the amazing creativity and wisdom of the Creator, the first to make a dragonfly fly.

Stuart Burgess is professor of engineering design in the department of mechanical engineering at Bristol University (UK). He is author of three books: Hallmarks of Design, He Made the Stars Also and The Origin of Man, all published by Day One publications (www.dayone.co.uk).
Previous Article God Invented It First Next Article Power Plants