See Cosmos: A SpaceTime Odyssey for reviews of other episodes and discussion guides for further study.

Cosmos: A SpaceTime Odyssey episode four, “A Sky Full of Ghosts,” though exploring some mind-bending concepts in physics such as the speed of light and the relationship between time and space and eventually discussing black holes, fires its most direct shot at the Bible’s account of creation before the first commercial break.

Sir William Herschel, the father of stellar astronomy—a devout Christian who saw the hand of our Creator in His stellar handiwork (Psalm 19:1)—is credited with realizing that some stars seen from Earth may, because it takes time for starlight to travel great distances, be only “ghosts” of dead, burned out stars. After saying that due to the time it takes light to cross the vast distances in space, light from distant objects must reach us long after it was produced, Tyson indicates telescopes are a sort of time machine.

It’s become very fashionable to refer to telescopes as time machines, but that’s a bit lame—we have no control over the time that we “visit,” and it only works in the past, not the future. That’s just a clever way of saying that there is a finite time for light to travel to us. Most of the solutions to the light travel time problem attempt to explain how not nearly as much time has elapsed as usually thought.

Asking how light from faraway could reach Earth within the roughly 6,000 year age of the Earth and the universe documented in God’s Word the Bible, Cosmos host Neil deGrasse Tyson says:

The Crab Nebula is about 6,500 light years from Earth.

According to some beliefs that’s the age of the whole universe, but if the universe were only 6,500 years old, how could we see the light from anything more distant than the Crab Nebula? We couldn’t. There wouldn’t have been enough time for light to get to Earth from anywhere farther away than 6,500 light years in any direction. That’s just enough time for light to travel through a tiny portion of our Milky Way galaxy. To believe in a universe as young as six or seven thousand years old is to extinguish the light from most of the galaxy not to mention the light from all the 100 billion other galaxies in the observable universe.

When Tyson made that statement, I wondered why he picked the figure of 6,000-7,000 years. Why not some other figure? Obviously, without explicitly mentioning biblical creationists, he clearly was aiming for us. Some have hailed this as a total refutation of recent creation, but Tyson's a bit late here, for that problem was pointed out long before he was even born. And just as those who believe in the big bang have offered a solution to their light travel time problem, we've offered possible solutions to our light travel time problem.

The big bang model has a light travel time problem too.

What Tyson, of course, does not address in the program is that young-earth creation scientists do offer biblically consistent models to explain how we see faraway objects in space without attempting to tamper with the laws of physics. One such model is the anisotropic synchrony convention which is based on the fact—as Einstein recognized—that it is impossible to objectively measure the one-way speed of light. We instead must measure the round-trip speed of light and simply agree that the one-way speed must be half of the total. Read more about how this explanation would answer the question of how light from distant stars could reach Earth within the time allowed in biblical history in "Distant Starlight" and, for the more technically minded readers, “Anisotropic Synchrony Convention—A Solution to the Distant Starlight Problem.”

Dr. Danny Faulkner points out that God created the stars to enable humans—from Adam onward—to measure times and seasons (Genesis 1:14–16). Dr. Faulkner in "A Proposal for a New Solution to the Light Travel Time Problem" offers an elegant solution which likewise refrains from any tampering with the laws of physics. In his biblically sound proposal, Dr. Faulkner explains how Adam would have been able to see faraway stars on the day he was created and

Moreover, not only do young-earth creationists have answers to offer to these complex questions, evolutionary astronomers who accept the big bang have their own light travel time problem. While Tyson talks frequently in the program about the illusory nature of the “horizon” we see at the edge of our sky, he never adequately addresses the big bang’s “horizon problem.”

But the big bang does have a big problem. Dr. Faulkner comments:

The big bang model has a light travel time problem too. The fact that cosmologists have proposed cosmic inflation is proof of that, because one normally doesn’t offer a solution to a problem that doesn’t exist. Inflation supposedly solves their light travel time problem, as well as other problems, which is why there was much excitement over the March 17 announcement of alleged discovery of evidence of inflation. I say “alleged,” because I suspect that the announcement is a bit premature and I am skeptical.

Be sure to read more about this highly publicized announcement in “Has Cosmic Inflation Been Proved?”

While tying the distant objects in space to the evolutionary events supposedly happening on Earth at the time the light from those objects presumably originated, Tyson attempts to build a cohesive evolutionary view of the universe and the life in it, yet evolutionary biology is unable to offer a shred of evidence that life evolved from non-living elements through natural processes.

Tyson reviews several of the concepts Einstein elucidated, such as the fact that no matter can reach or exceed the speed of light. Such fundamental laws of nature, biblical creationists understand, were put in place by our Creator when He created the universe about 6,000 years ago. We have no frame of reference that would allow us to know the age of the universe or how those fundamental laws of physics came to be other than God’s eyewitness testimony in His Word.

The universe that God created contains many binary stars. The movements of these binary stars—as Tyson mentions—helped scientists discover the existence of “black holes.” Black holes also seem to exist at the center of galaxies and, though invisible, their presence explains much of the observable behavior of objects and gases near the center of various galaxies. 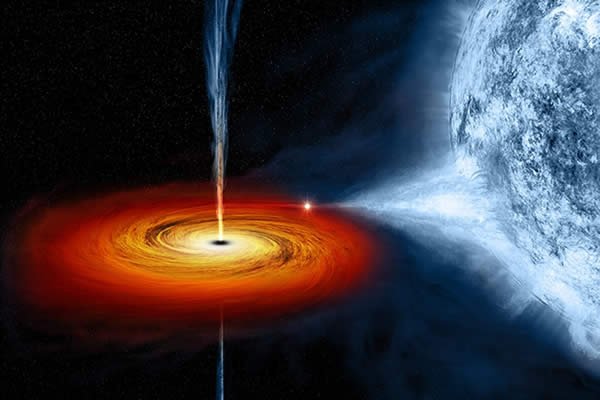 This illustrates a stellar black hole (left) which is part of a binary star system. Material from the blue star glows as it encounters the black hole’s accretion disc. Dr. Faulkner, whose research has involved work with binary stars, uses this image as he explains the interaction of a black holes with companion stars in his presentation Things That Go Bump In The Night. Image from NASA/CXC/M. Weiss 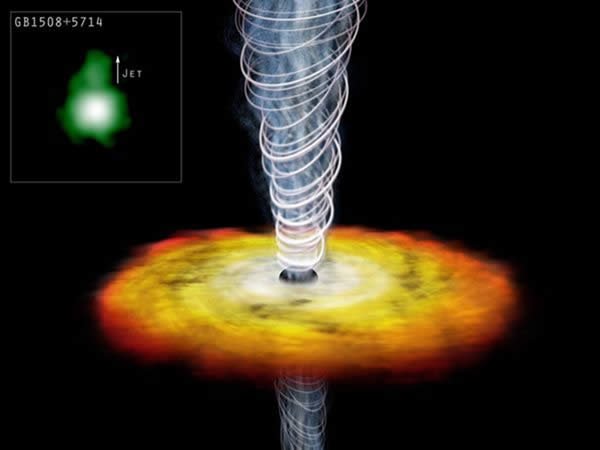 This is an image of the quasar GB1508+5714 obtained at the Chandra X-ray Observatory and an artist’s conception showing the supermassive black hole at the quasar’s center, its accretion disk, and jets of high-energy material. In his DVD Things That Go Bump In The Night, Dr. Danny Faulkner uses this and many other images to explain what black holes are. (Image courtesy of NASA/CXC/A. Siemiginowska et al., and illustration from NASA/CXC/M. Weiss through Things That Go Bump In The Night.)

After the discussion of the observable science surrounding black holes, there is plenty of fodder for science fiction fantasy in the closing portion of this Cosmos episode. From God’s Word, we have an eyewitness account of the truth that should constrain all actual scientific explanations of the history of our universe’s origins. God did not tell us everything about science in His Word, but He is our Creator and as a holy God that loves us He can be relied upon to tell us the truth. Therefore, any truth about our origins—whether biological or cosmological—will necessarily fall within biblical parameters.

For a more extensive discussion of the plain application of physics to this topic, I urge our readers to check out Dr. Danny Faulkner’s DVD Things That Go Bump In The Night. In this DVD the physics that applies to black holes and dark matter are clearly explained and illustrated. Answers in Genesis astronomer Dr. Danny Faulkner has devoted much of his professional career to researching binary systems to learn more about the universe God created. His engaging and well-illustrated presentation shows viewers how we can know that black holes are real and shows us much that we can learn from the relationship of black holes to binary stars and to galaxies.

The heavens do indeed declare the glory of our Creator.