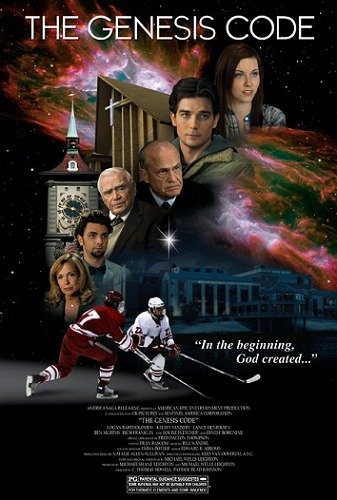 The recently released movie The Genesis Code, which had a few film showings in Michigan movie houses (and perhaps elsewhere), presents the fictional account of a non-Christian, college hockey player whose mother is in a coma, and an attractive pastor’s daughter who is to interview him for a college newspaper (and soon finds herself attracted to him). Spoiler alert: the hockey player becomes a Christian, his mother comes out of the coma, and the guy and girl end up together.

The real purpose of the movie, however, is to serve as a vehicle to promote the idea that science and the Bible can be reconciled, with particular emphasis on the creation account of Genesis. Of course, operational science (measurable, testable, and observable science) is a “friend” of the Bible, and when properly understood, we can use science to support the historicity of Genesis (see Creation: Science Confirms the Bible Is True). Unfortunately, this movie immediately gets off on the wrong foot by unquestioningly embracing, as indisputable scientific fact, the speculative claims of scientists regarding the age of the universe—that the universe is about 15 billion years old. The movie then tries to startle viewers with the revelation that there is a special “code” hidden in the Book of Genesis that roughly agrees with a long age of the universe.

The film has much discussion about the physics of time dilation: how the perceived passage of time is dependent upon the perspective of the observer, and how the passage of time can be affected by mass, acceleration, and the stretching of the fabric of space. Some of this is operational science, and can be experimentally verified, and it actually may well help biblical creationists explain how we can see light from distant stars in a young universe. But by taking extensive liberties with the interpretation of certain Hebrew words in the Bible, along with the use of time dilation and God’s perspective from heaven, the movie seeks to impose a billions-of-years, progressive-creation timeline into the Genesis account.1 The movie claims that this is a better explanation of what is observed in the rock layers and the fossil record as opposed to molecules-to-man evolution.

The film makes no reference to the effect that Noah’s global Flood would have had on geography or in laying down of fossils, and it makes no attempt to address the glaring problem of having millions of years of violence, suffering, disease, thorns, thistles, and death before Adam’s sin (Genesis 3). Instead, it implies that all the intellectual problems of skeptics have now been solved in this film, and that science and the Bible have been reconciled (apparently with all the “reconciling” being done through changing the clear Bible chronology that gives an age of the universe to be about 6,000 years).

The newly-enlightened pastor seen in the film claims that anyone who tries to interpret the creation account plainly (i.e., as describing six 24-hour days) is being arrogant because that would be claiming to know the mind of God. Of course, biblical creationists just point to what God has clearly told us in Scripture: the days of creation were ordinary 24-hour days (see Could God Really Have Created Everything in Six Days?), and when readers of the Bible add up the chronologies in the Old and New Testaments (from Adam to Abraham about 2,000 years, and from Abraham to Christ 2,000 years), they come to a creation date around 4,000 BC.

While undoubtedly produced with good intentions, The Genesis Code in the end encourages believers to trust the speculative and biased claims of a certain view of historical science. Now, Christians can put some trust in the claims of operational science (the kind of science that gives us high-end technology like fast computers, medical advances, space flight, etc.), but historical (or origins) science is not the same. It cannot be verified by operational science, and the secular view always begins with the biased assumption of naturalism. Historical science is really more of a philosophy about how to view the past, and is not comparable to operational science. Historical science is practiced by fallible people, who offer educated speculations about the past without ever observing it. The speculations about the unobservable past should not be accepted over the teachings of what happened in the past that God has clearly stated for us in His Word.

Even though the film’s producer has an anti-evolution message, the producer’s real take-home message is that, when science and faith are in conflict regarding the age of the universe, the Bible is what must be adjusted. Unfortunately, because the film features Academy Award-winning actors like Louise Fletcher and Ernest Borgnine—plus the well-known actor, former presidential aspirant, and U.S. Senator Fred Thompson—this film might garner some national attention and present a compromised message to unwary moviegoers than what might otherwise be expected.

Dr. Rowland is a dentist in Michigan. He is a graduate of the prestigious University of Michigan Dental School.