[Spoiler Alert: Though this review contains few, if any, spoilers, those who wish to have none may want to read this review after seeing the movie.] 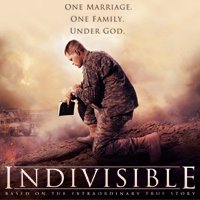 Coming to theaters October 26, 2018, is the patriotic film, Indivisible. This film is based on the true story of US army chaplain Darren Turner and his family. It follows Chaplain Turner’s time in Iraq during a 15-month deployment and the struggles he and his family face when he returns, a changed and struggling man. Through his story, the hope found only in Christ is clearly highlighted.

How Could a Loving God?

Indivisible comes across as a very real story, filled with raw emotion and realistic struggles. It’s a valuable insight into the trials of many military families, especially those facing or coming back from deployment. This story highlights the pressures on marriage that can happen in such circumstances. And even though this film is about a military family, the story is relatable for all marriages, and many couples will be encouraged by the theme of fighting for your marriage. The change Christ brings to our lives is clearly portrayed in more than one character, and the importance and sanctity of the family unit is upheld.

One major theme throughout the film is how can there be a good God with all the suffering people face daily? Several of the characters, including the chaplain, struggle to answer this question as they face the terrible realities of war in a world that it is marred by sin and the curse. As the characters wrestle honestly with this question, the goodness of God no matter the circumstances is upheld and there’s encouragement given to trust God, even when we cannot understand his ways.

How Do We Deal with Suffering?

When Chaplain Turner arrives home to his wife and children, he brings his battle scars with him. He is grappling with questions about death and suffering that we as a ministry know all too well. In addition, Turner is dealing with the harsh imagery of war replaying again and again in his mind.

Rather than shy away from the strong emotions suffering can bring, the film portrays these in a very real way that many can relate to from their own circumstances. While we recommend young children not watch this film, the themes shown in the movie are well done and appropriate for Christian families.

Parents with younger children should be aware the film is PG-13 because there are some scenes that may be intense or disturbing for young viewers. The depicted violence in Iraq is mild and nothing graphic is shown. When Chaplain Turner returns home, his temper flares at various times, and he and his wife shout at one another. Young children may find this disturbing.

The film was a refreshing and honest approach, within a compelling story, to the question of suffering from a unique perspective.

A Good God, Even in Suffering

Indivisible is an uplifting film to see for a date night or with your older children. It casts the struggles military personnel and families face during and after a deployment in a poignant way. The characters in the film are shown as flawed individuals, not “perfect” Christians with all the answers, clinging to their faith in God even when they don’t understand his ways.

Faith can often come with doubt, and, toward the end of the film, Chaplain Rogers tells Turner that he wonders if we can’t have faith without a little bit of doubt. We all struggle with doubt from time to time. It is refreshing to see that, as Christians, while we may doubt, we can take comfort in God’s words to us in these circumstances: “Be still, and know that I am God. I will be exalted among the nations, I will be exalted in the earth!” (Psalm 46:10).

Indivisible is sure to spark conversations about our good God, even in suffering, and how we can support military families. After you watch the film, we encourage you to supplement the movie with articles like “Why Does God Allow Bad Things to Happen?” and “Why Does God’s Creation Include Death and Suffering?”

Be sure to tell your friends and family about this film, and go out to support a Christian-friendly production! Learn more and find a theater near you at IndivisibleMovie.com.