Students from the Apologetics class at Jackson Hole Bible College were tasked with reviewing the new book, Already Compromised.

Last month, I had the opportunity to teach a class on apologetics at Jackson Hole Bible College in scenic Jackson Hole, Wyoming, with the magnificent Grand Teton Mountains in the background and spectacular Yellowstone National Park just to the north. This region is one of my favorite spots on the entire planet.

I had 30 young people in my course on biblical apologetics. The main assignment I gave them was to read our new book, Already Compromised, and write two papers about it. I presented each student with a pre-print, spiral-bound copy. The final book was being printed during the days I was teaching this JHBC class.

Several of the student papers were outstanding, and I have decided to excerpt many of them here on the web. As you read these excerpts, please be aware that this “assembled” review still flows as something of a narrative. I think you will find it to be an easy read (some minor editing was done to help ensure ease of reading). As something of a tribute to these outstanding young people, many of whom will become leaders in the church, I have put their first name at the end of their respective section.

In his novel, The Lion, the Witch and the Wardrobe, a C.S. Lewis character asked the question, “What do they teach them at these schools?” He was referencing the lack of use of logic he saw in children. As Christians, we would do well to ask the same question when evaluating educational institutions, both Christian and secular.

Ken Ham and Greg Hall, with the research help of Britt Beemer, set out to answer these questions in the new book Already Compromised, published by Master Books. The book investigates the situation at today’s Christian colleges, describes how colleges’ teaching relates to Scripture, and presents challenges to Christians on how we can and should respond in light of the current state of Christian education. Is there anything of concern in today’s Christian colleges? Already Compromised suggests that there certainly is. (Aimee R.)

The book begins by discussing the legacy of the Ivy League. The colleges in the League, such as Harvard, Yale, Princeton, and Dartmouth, were at first established by Christian men with solid views of Scripture. However, through naturalistic textbooks and liberal professors being brought into the system, these universities wandered farther and farther from the truth. Within roughly 200 years from the time they were founded, each school was already compromising the Christian faith. This is relevant and important today because even when a college or university starts out with strong Christian leaders, over time they are likely to be compromised by teachers who add their own interpretation to Scripture, and influence others to do so as well. 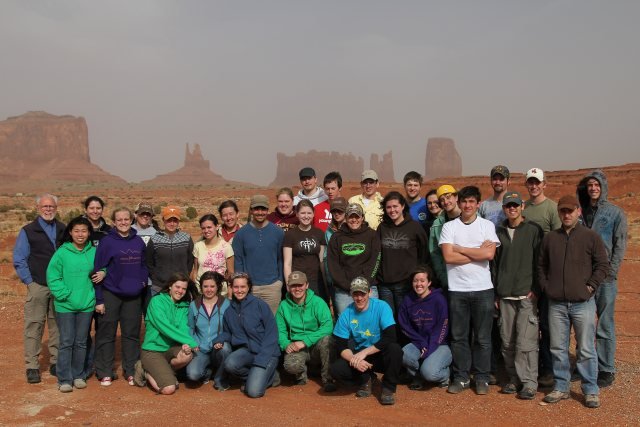 The apologetics class from Jackson Hole Bible College took a trip to southern Utah to visit famous Monument Valley. It was a part of their study of the topic of geology and Noah’s Flood.

Already Compromised discusses the reality that many Christian colleges have become no better than secular schools when it comes to a true view of Scripture. Though evolutionary and humanistic teachings are to be expected from secular schools, the amount of this compromise we see in Christian colleges is astounding. This book shows the increasing departure from Scripture in higher education today, and what to look for when seeking a college to attend. (Micaela R.)

Already Compromised follows in the footsteps of Ken Ham’s previous book Already Gone. Both books are written from a survey point of view, and focus on where the church is today spiritually. Ham’s first book Already Gone focused on the mindset of young people and why so many of them are turning away from Christianity. The problem exposed in Already Gone was that churches and parents are failing to provide a biblical foundation for faith by providing answers for their questioning young children and teens.

The focus of Already Compromised is to expose the infiltration of the same thought in Christian campuses across the country, and why the students who are not “already gone” when they get to college are leaving the faith when they reach these “already compromised” Christian colleges. (Cort T.)

The foundation of this book is based on a study run by Britt Beemer of America’s Research Group. Beemer conducted a survey of Christian institutions of higher learning, asking questions of people in four different positions: president, vice-president, head of science, and head of theology/religion. This survey resulted in getting a big picture of what is happening on the general Christian college campus, and it brought to light some specific issues of concern.

It is encouraging to discover that nearly all of the participants in the survey answered positively when asked questions about foundational New Testament theology. However, the answers given for the questions concerning truths of the Old Testament are rather disheartening. They seem to have different definitions of important words such as “literal,” “infallible,” and “inerrant” when referring to Scripture.

Eighty-three percent of those surveyed stated that they “believe the Genesis 1–2 account of creation is literally true.” However, only 59.6% responded yes when asked “Do you believe in God creating the earth in six literal 24-hour days?” A shocking 10.9% claimed that their institutions teach evolution as truth! (Heather Y.)

When taking up the issue of creation verses evolution, one would think that those in the science department would lean towards evolution and an old earth. But the survey began to show a different side to the schools that were polled. When questioned on the inerrancy, inspiration, and infallibility of the Scriptures, each time the religion department had a higher percentage that believed those principles to be true than the science department. The science department had a higher percentage of people that believed the Bible was literally true, that there was a flood in Noah’s day, and that Genesis 1–2 were literally true than the religion department. Many of the scientists know that the evolutionary model doesn’t work. They have placed their faith in the word of God.

In the survey, the president gave answers that parents and students would want to hear in order to get more students to come to their college. On the other hand the vice president, as the one who deals with the daily grind of dealing with professors and students, often gave different answers as to how the college was run and what was taught and believed by the professors.

If parents want to make sure that their college kids are learning biblical truths based on the authority of the word of God, they are going to have to start taking action! One way would be to do your best to talk to as many of the heads of departments, as well as the professors, to see what they actually teach and believe.

As I look at the church in America today I see a “Christian culture” that is no longer based on the authority of the Word of God. The pastors and leaders have through the years moved to a foundation of man’s words rather than basing their life, ministry and teaching on God’s Word. (Shannon G.)

Every year thousands of Christian parents and teens visit denominational, church affiliated and Christian colleges or universities to find which one will best nurture their child’s relationship with Christ. From outside the classroom, all may look wonderful! The campus ministries, daily chapels, and even the caring professors may appear as though the school is taking every measure to cultivate a rich relationship with Christ. However, too often the most pivotal area is overlooked by the parents and students: how the school and individual professors view the authority of the Scripture and how they handle and apply God’s Word.

Unfortunately, many schools do not want the public, especially parents, to know what they are teaching. (Jessica M.)

Throughout the centuries, from Pentecost until the present, Christians have been “boarding their own ships.” In recent times, the ships have been caught in storms close to the “shore of unbelief,” being struck continually by lightning and often moving in circles. … To their horror, they see catapults being set up along the shore, directed squarely at the ships in the storm. The people manning the catapults yell: “It is time that we end their madness!”

Intrigued, concerned people take their megaphones and yell out towards the ships closest to them, warning them of the imminent danger of the catapults. Most of the Christians manning their ships ignore the voices of those on the shore. Unless more of the informed and experienced sailors understand the situation on the shore, many more young Christians will sink. (Richard R.)

In my opinion, the reason a book like Already Compromised is necessary is because the Church has become lazy. Parents spend thousands of dollars to send their child to a Christian university because they want them to have a Christian education—and that’s not wrong. But what is wrong (and lazy) is assuming because the school is religiously affiliated or has the word “Christian” in the name, makes it a doctrinally sound institution.

Parents do not investigate universities thoroughly enough. On the surface it looks like the school’s statement of faith is generally what the family agrees with. However, what parents should be doing is taking the time to ask questions of the individual professors that their child will be studying under. They should use the questionnaire given in Already Compromised and discover truly what the instructor believes and therefore teaches in the classroom. (Kaitlyn B)

Already Compromised caused me to respond by searching myself, judging my own thinking against Scripture, affirming what I believe, and by researching how to better give answers about the truth to those who question it.

I cannot wait to share the information I learned in this book with others, as many as I can, to help reverse some of the damage this way of thinking, teaching, and learning has led to. (Elisha P.)

I thank God for Bible colleges like Jackson Hole Bible College (and seminaries) that teach their students the full authority and accuracy of the Bible from the very first verse. I strongly encourage you to obtain a copy of Already Compromised and also use its companion website of www.creationcolleges.org so that you can better understand the sad state of our Christian colleges in America—and also what can be done about it.