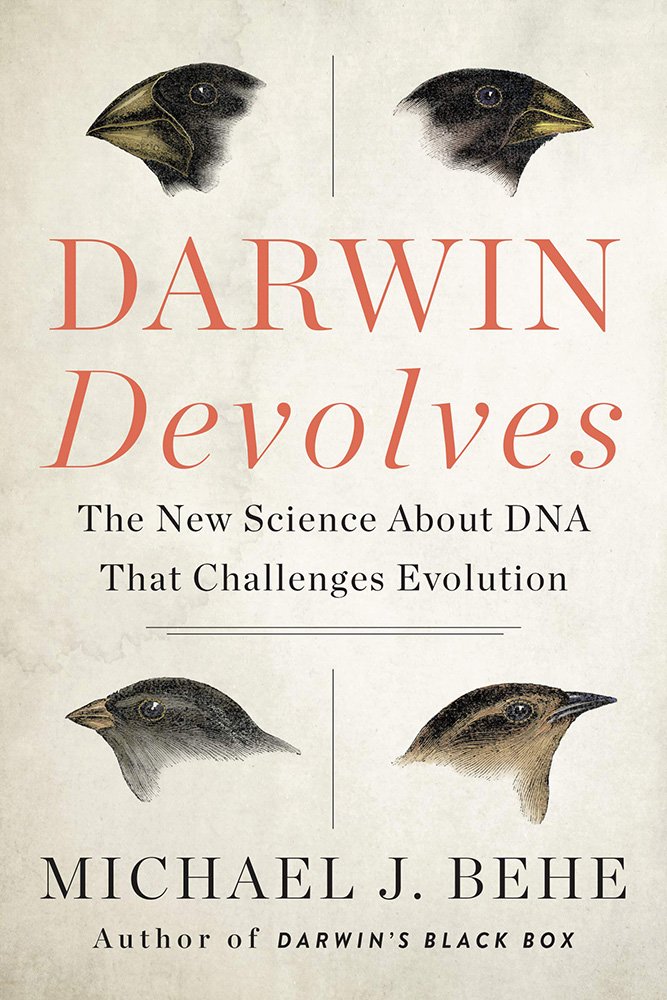 New techniques and biochemical methods have progressed dramatically since Dr. Michael Behe, notable biochemist from Lehigh University and popular Intelligent Design proponent, published his first book, Darwin’s Black Box, in 1996. Behe ably uses his knowledge of newer research in Darwin Devolves (Behe 2019) to demonstrate that mutation and natural selection ultimately cause degradation rather than the evolution of new information that the modern Darwinian synthesis requires. Behe coined the term devolution to describe this degradation.

Behe has received quite a bit of flak from the scientific community at large over his intelligent design (ID) proposals. An intriguing aspect of Darwin Devolves is an autobiographical sketch about how he arrived at his position on ID in the first place. Also intriguing is the appendix, entitled “Clarifying Perspective,” in which he describes how he has responded to his critics since the publication of Darwin’s Black Box. Both the introduction and appendix are well worth reading.

Just like materialistic evolutionists, Behe makes it clear that he unequivocally embraces common descent. This is not unique to Darwin Devolves, as he embraces it in Darwin’s Black Box and The Edge of Evolution. In this book, however, he argues that Darwinian evolution through random mutation and natural selection cannot mechanistically account for common descent. As a biochemist, Dr. Behe is fully aware that a chemical reaction may take place as a series of steps called a mechanism. The chemistry of life follows the same rules as any other chemistry and therefore, is comprised of sequences of reactions that already are or can be understood to be reaction mechanisms. Photosynthesis is an excellent example. While the overall effect is to convert carbon dioxide, water, and sunlight into glucose and oxygen, the process actually consists of a complicated set of steps involving numerous enzymes and other materials. As Behe points out, biologists claim that common descent is caused by random mutation and natural selection. If this is true and if life is constantly evolving around us, then it should be possible to identify sequences of specific chemical processes that lead to common descent. To convincingly demonstrate such mechanisms, they would need to be shown in series of organisms that cross multiple levels of taxonomic organization. Phylogenetic trees based on molecular homological studies do not establish a mechanism at all, and so studies of a different nature would be needed. In short, Behe is right. Nathan Lents claims that Behe is holding evolution to “an impossible standard” (Lents 2019). Behe is simply holding evolution to the same standard that Darwin himself gave for evolution: “If it could be demonstrated that any complex organ existed, which could not possibly have been formed by numerous, successive, slight modifications, my theory would absolutely break down” (Darwin 2017). While evolutionists claim that such modifications explain all variations in organisms, they have not experimentally demonstrated mechanisms for the myriad of specific instances of variation we observe. Lents’ dislike of Behe’s assessment of this state of affairs does not invalidate Behe’s argument.

As is well known, Behe’s approach to intelligent design is to make his case based on data and scientific arguments. Consequently, he rarely identifies who he thinks the intelligent designer is. In this work, however, he clearly states, “Most people, including myself, are theists that will naturally tend to ascribe the design to God” (Behe 2019, p. 278). Behe apparently thinks that common descent as derived from molecular phylogenetics is included in this design. Elsewhere he states, “. . . if one believes (as I do) that the designer is God, then God planned life on earth down to the molecular level” (López N.D.). How he thinks that God implemented a design that gives what he thinks is the appearance of common descent is anybody’s guess.

In the course of these arguments, he unwittingly supports recent creation.

Throughout the book, Behe points out that mutations degrade genetic information, and he provides numerous examples from E. coli to polar bears. In the course of these arguments, he unwittingly supports recent creation. He does so most clearly in the chapter entitled “The Family Line.” The diversity of life seen today can be accounted for in thousands of years through baraminology,1 a creation science field of study which identifies what the Bible calls a “kind” as being most closely aligned with the family level of Linnaean classification.2 We find it fascinating that Behe, who supports common descent, provides support for created kinds. It’s not surprising that he does so without any reference to the biblical kind.

Creation scientists have for many years proposed that mutations almost always lead to non-functional or seriously impaired products and processes in organisms. Cornell University geneticist J. C. Sanford supports this idea in his book, Genetic Entropy & the Mystery of the Genome (Sanford 2005). As he says, “. . . mutations appear to be overwhelmingly deleterious, and even when one may be classified as beneficial in some specific sense, it is still usually part of an over-all breakdown and erosion of information” (Sanford 2005, p. 27). Behe echoes this idea with his concept of “poison-pill mutations,” which are an important contributor to “genetic entropy.” Darwin Devolves provides good evidence that mutations degrade genomes. What materialistic evolution needs—new information—mutations do not supply.

One of the weaknesses of this book and the ID movement, in general, is its lack of a credible story to account for what we observe. While it does have the unifying idea that all life appears to be designed by an intelligent being, questions about who that being is and how the amazing diversity displayed in the universe was brought into existence are neither asked nor answered.

Behe provides an easily readable book that is well documented with an enjoyable story line. We recommend this book to creationists who want to find biochemical support for their ideas and to evolutionists who question the idea that mutation and natural selection can explain common descent. Though neither group would agree with all that Behe writes, both ends of the spectrum can find helpful ideas and thought-provoking arguments.

Darwin, Charles. On The Origin of Species by Means of Natural Selection, or the Preservation of Favoured Races in the Struggle for Life, 6th edition by Charles Darwin, Unabridged 1872 Original. CreateSpace Independent Publishing Platform, 2017.