“Woof” Worse than its Bite!

The latest issue of National Geographic features a cover story with an intriguing title: “Evolution of Dogs: Wolf to Woof.” 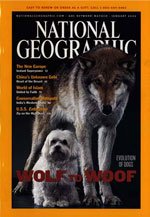 The latest issue (January 2002) of National Geographic features a cover story with an intriguing title: “Evolution of Dogs: Wolf to Woof.” The pictures, as usual for National Geographic, are striking. But the text merely offers tantalizing tidbits, not any real meat, on the article’s main topic—the supposed evolution of dogs.

In fact, the article’s central foldout—entitled “Breeds apart: one species, hundreds of faces”—emphasizes that all dogs are members of the same species, even though their diversity is unmatched by any other species. Actually, that’s not too far from the creationist view as espoused by AiG—more about that later.

While the article admits that “No other species displays such diversity,”1 the author also declares the following about the “evolution” of dogs from wolves: “At the molecular level not much changed at all [when dogs “evolved” from wolves]: The DNA makeup of wolves and dogs is almost identical.”2 Indeed, the magazine later acknowledges that the difference between wolves and dogs is no greater than the difference between so-called “races” of people (with which we would concur):

Genetic studies show that dogs evolved from wolves and remain as similar to the creatures from which they came as humans with different physical characteristics are to each other, which is to say not much difference at all. “Even in the most changeable mitochondrial DNA markers [DNA handed down on the female’s side], dogs and wolves differ by not much more than one percent,” says Robert Wayne, a geneticist at the University of California at Los Angeles.3

Of course, this type of “evolution” from wolves to dogs has nothing to do with Darwinian evolution (i.e., animals taking on radically new physical characteristics over time, such as fish turning into antelopes). Biblical creationists, including scientists at Answers in Genesis, point out that the “evolution” discussed in the article is only a change within the biblical “kind’—the term used in Genesis 1 to describe each created type of land animal on Day 6 of the Creation Week.

As the National Geographic article reveals, with helpful graphics of dog skeletons: “The skeleton of the wolf has been manipulated [into all shapes and sizes of dogs]—without losing a single bone.”4 This type of change described by National Geographic actually involves a loss of information, as the rich variety of the first created dog/wolf kind has divided into wolves, coyotes, dingoes, and dogs over the biblical timeframe of 6,000 years or so, with each subtype having progressively less potential to vary further (chihuahuas cannot be bred back to Great Danes or vice versa, even though they descended from the same population).

Make No Bones about It: The Missing Links Are Still Missing!

The only section where the article really discusses evolution in the sense of “radical changes over millions of years” is a two-page spread on the “Roots of the Dog.” Here the highly imaginative illustrator impresses the reader with a dramatic scene from supposedly “eight million years ago on what is now the U.S. Great Plains.” But as the article shifts from photographs and skeletons to the painting of imaginary scenarios, it moves from science to speculation.

Below the scene of the Great Plains is the magazine’s attempt to show the evolutionary lineage of the dog. At least the artist is honest enough not to utilize the usual “evolutionary tree.” (See How to Read an Evolutionary Family Tree and Dinosaurs: Phylogenetic Chart.) Instead, the illustration shows three parallel lines of the three subfamilies of Canidae (or canids). This illustration is fitting, because the evolutionary chain is missing all the links between these three subfamilies, including the Caninae (from which we get the modern canines)—see our version of this illustration. It is of course possible that all of these subfamilies are in fact related by descent from an original created kind, which in this case would be at the family level. However, the similarities may well be the result of common design features.

So What Do We Actually Learn About the “Evolution of Dogs”?

What, then, has National Geographic really shown us? This article is another example of Darwinist equivocation (using one word with two meanings, without alerting the reader). The change between wolves and dogs is merely a change in a population over time, without any addition of novel genetic information (in accord with the creationist framework), and usually involving the progressive loss of information. Loss of information mainly occurs via adaption through natural selection (which is a culling process). Mutation (accidental inherited DNA changes) can accelerate the downhill process by corrupting, degrading, or deleting genetic information directly. (See Are There Beneficial Mutations?) But this type of change is not the same thing as the popular understanding of evolution: the rise of one kind from a radically different kind of creature, involving new physical characteristics and new genetic information, i.e., a progressive addition of genetic information.

Creationist biologists are constantly trying to clarify two misconceptions about life’s origins. First, to demonstrate that evolutionists often fail to acknowledge that the development of new species (speciation) is not evolution in the classic sense of upward progression toward increased complexity. Creationists do believe in speciation, and actually expect that speciation occurs much more rapidly than most evolutionists do! Second, true evolution would involve the appearance of completely new genetic information (See Get Answers: Information Theory), which evolutionists have never been able to demonstrate in any creature even once, let alone the many hundreds of examples we should be able to see if molecules-to-man evolution were true.

The Truth about Dogs and Wolves

Those who believe in a literal six-day Creation and a worldwide Flood should find the study of dogs and wolves fascinating. National Geographic touches on some interesting questions, but because the magazine makes false assumptions about the history of the Earth, it also reaches false conclusions about the evidence.

Unfortunately, the magazine doesn’t even pose some of the most interesting questions—particularly for creationists. For example,

We all have the same science and evidence as evolutionists, but both sides interpret the facts depending on their particular bias. Whether students or teachers, firefighters or scientists, casual readers of National Geographic or avid fans of science, Christians who believe the authority of the Bible need to understand how to interpret the facts. Then we can be ready to have answers in case anyone should ask, “How does the ‘evolution’ of dogs line up with Scripture?”

The wolf and the dog came from one “kind” that was made on Day Six of Creation, along with man. And we know that by the time of Moses, this kind had become two distinct animals (Genesis 49:27 mentions wolf, Exodus 11:7 refers to a dog), but they did not “evolve” into a new kind of animal through added genetic information. The fossils and living species that we observe today are clues to help us piece together the rest of the puzzle about God’s marvelous work in this world.