With the passing of US Supreme Court Justice Antonin Scalia on February 13, America lost a brilliant legal mind and an advocate of religious freedom and judicial restraint.

A traditional Roman Catholic, Justice Scalia opposed abortion and homosexual “marriage,” two hot-button issues addressed in the book of Genesis. Based on Genesis, the Catholic Church teaches that humans are created in God’s image, thus making abortion wrong, and that God instituted marriage expressly as one man for one woman.

In his scathing dissent against the Supreme Court’s ruling in favor of homosexual “marriage,” Scalia claimed, among other things, that the Court’s action was worse than England’s treatment of the American colonies. He called the decision “social change without representation.”

Concerning creation, Justice Scalia dissented in the infamous 1987 Edwards v. Aguillard decision, where the Supreme Court ruled unconstitutional a Louisiana law requiring that creation be taught alongside evolution in government-run schools. Whether or not Scalia personally agreed with creationists, he commented that the documents presented to the Supreme Court gave no reason to reject the scientific basis for creation: “We have no basis on the record to conclude that creation science need be anything other than a collection of scientific data supporting the theory that life abruptly appeared on earth.” He argued that the final decision should be up to legislators, not the courts. 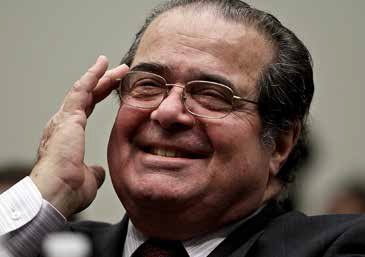 The death of US Supreme Court Justice Antonin Scalia creates the possibility for an even more radical shift in legal decisions.

With so many cases pending on abortion and homosexuality, Justice Scalia’s passing raised the stakes in this presidential election year. He was one of only four consistently conservative Supreme Court justices. If he is replaced by a liberal, US citizens can expect an even more radical shift in legal decisions.