University of California at Berkeley Sued over Pro-Evolution Website

Led by the well-known evolutionist and atheist Eugenie Scott, the National Center for Science Education claims there is no conflict between religious beliefs and evolution.

An associate professor at an American college checked out the Understanding Evolution website to get ideas for her introductory biology course for incoming freshmen. A teacher had recommended the website to her, a site which included a section described as “the ultimate evolution resource for K-16 teachers” and as a place to get the latest findings on evolution.

A school board member, hoping to become more knowledgeable on the history of evolution, visited the same website, run by the University of California at Berkeley. There, he found a section on the recent controversies related to evolution. It included questions on how evolution should be taught, what happened at the Scopes “monkey” trial, information on creation and intelligent design, what the law says about teaching evolution in public schools, and more.

As a Christian who believes in the biblical account of creation, he was shocked by the answer to one of the questions: “What statements do different religious groups make on evolution?”

“There is no conflict between religious beliefs and evolution,” was the central theme of the document that included statements from 17 denominations and groups, leaving out any mention of those who hold to a literal, six-day creation, despite the fact that recent polls have shown that a significant percentage of Americans believe this.

But what would one expect when the compiler of this document (and others on the site) is none other than the anti-creationist group, the National Center for Science Education? Led by the well-known evolutionist and atheist Eugenie Scott, this group happens to be a major contributor to the project, along with the University of California Museum of Paleontology.

That answer was certainly not what California parent, Jeanne Caldwell, expected to find from a website funded by taxpayer’s money. Her shock led to action-in the form of a lawsuit.

According to a Pacific Justice Institute (PJI) press release (October 13; PJI is a legal defense organization that specializes in the defense of religious freedom, parental rights and other civil liberties), Caldwell, along with the PJI and a group called the Quality Science Education for All, filed a federal lawsuit on October 13 against officials of the University of California at Berkeley and the National Science Foundation (who provided some financial support) over religious statements made on the Understanding Evolution website.

The lawsuit alleges that the state and federal governments are promoting religious beliefs to minor school children through the website (which was created with more than $500,000 in federal funding), which they say violates the First Amendment of the US Constitution.

“While the government has a legitimate purpose in educating students about the science of evolution, it’s outrageous that tax dollars would be spent to indoctrinate students into a particular view of evolution,” Caldwell, whose husband Larry is a lawyer, an anti-evolution activist and the founder of a group called Quality Science Education for All, said in a news release published in the Inside Bay Area-Argus (October 16).

One webpage from this site, called “Misconceptions,” states that, “Most religious groups have no conflict with the theory of evolution or other scientific findings. In fact, many religious people, including theologians, feel that a deeper understanding of nature actually enriches their faith. Moreover, in the scientific community there are thousands of scientists who are devoutly religious and also accept evolution.” 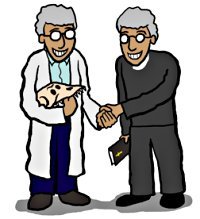 The page, “Misconception: Evolution and religion are incompatible,” is illustrated with a cartoon depicting a scientist shaking hands with a pastor who is holding a Bible with a cross on it.

Regarding the website linking to religious groups’ statements that support evolution, attorney Caldwell, whose group is co-counsel in the suit, said in an Inside Higher Ed News article (October 18), that Berkeley was “taking a position on evolution and attempting to persuade minor students to accept that position.” He added that links should have been included to religious groups that offer non-evolution views as well.

Caldwell went on to say that it was the “height of hypocrisy for this to be coming from people who claim that they are trying to keep religious instruction out of science class.”

University of California counsel Christopher Patti completely disagreed, saying in the same article, “What you have here is a web site that is assisting teachers in the teaching of scientific concepts. It does not advocate any particular religious views but simply describes in a very straightforward way some of the issues that have arisen with the intersection of science and religion. There’s nothing wrong with that.”

Brad Dacus, president of PJI (co-counsel in the case), said in the Inside Bay Area-Argus (October 16) article, that the University of California at Berkeley “is on a crusade to spin religious beliefs for its own pro-evolution agenda.”

And this is not the first time the school system has found itself in the middle of the creation/evolution controversy. The university system was sued in August 2005 by six students, Calvary Chapel Christian School and the Association of Christian Schools International (ACSI) for discriminating against private high schools that teach creationism and other conservative Christian viewpoints. (See University of California Sued for Discriminating Against Christian Courses.)

Ironically, it’s usually the Darwin doubters who are accused of crossing the supposed church/state lines in the ongoing battle over how origins should be taught in public schools. But this time, the situation is reversed. The evolutionists are using certain religious groups (those whose views line up with their own evolutionary belief systems) to promote their secular, humanist worldview. And sadly, they are using taxpayer dollars to do so.

With a recent CNN/USA Today/Gallup poll (October 13, 2005) finding that “Americans are more likely to endorse a purely creationist view of the origin of humans than a purely evolutionary view or a view involving elements of both,” it is safe to say that the content of the Understanding Evolution website does not reflect the view of most Americans.

As today’s culture war continues to heat up in America, the Answers in Genesis website is all the more important in fighting this kind of indoctrination in schools. With your continued support, www.AnswersInGenesis.org will remain among the top 2% of all websites, worldwide. Receiving over 1.6 million visits per month, this Bible-proclaiming site provides nearly 5,000 free articles and resources that help equip Christians to defend their faith in these increasingly secular times.