by Mike Riddle on May 12, 2006
Share:
Email Using:
Gmail Yahoo! Outlook Other

A Missouri speaking engagement has grown into a statewide controversy, with The St. Louis Post-Dispatch editorializing against AiG. What brought on this media barrage?

If you happen to live in or near the state of Missouri, you may have heard that AiG has been in the news quite a bit this week in the aptly named (this week, at least) “Show-Me State.” What turned out to be a speaking engagement in Missouri a few days ago has grown into a statewide controversy, with one of the nation’s leading newspapers, The St. Louis Post-Dispatch, editorializing against AiG (calling us “anti-science”). What brought on this media barrage? 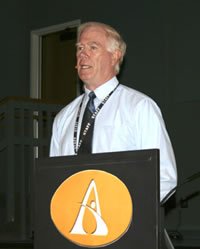 A so-called “civil liberties” group and the secular media were topics of Mike Riddle’s talk to the AiG staff on Thursday.

On Monday, I had the opportunity to speak in a public high school and middle school in Potosi, Missouri. The principal of the high school—along with the superintendent of schools—had invited me more than six months ago to speak about science topics and show students how science works. On the Friday before, the Washington, DC-based group Americans United for Separation of Church and State (AU) got wind of this, and issued threats of a lawsuit against the school district if I were to speak (because I would allegedly prompt “students to adopt a creationist religious alternative … which cannot lawfully be presented … [and] would be a substantial constitutional violation,” declared AU). Why the threats, even though it was clear I would not speak on religious subjects? Well, because I work for Answers in Genesis, a creation-based ministry, AU deemed it unconstitutional for me to speak in a public school—regardless of the content of the talks I was to give.

Prior to giving my talk, I had the presentation reviewed by the superintendent, Potosi science teachers and others to examine it for any religious content. All agreed that the presentation contained only science that was relevant to what was being taught in science classes. The title of the talk (I gave it six times) was “The Origin of Life: A Scientific Approach.” Thus the school administrators did not cancel the meetings as demanded by AU in its May 5 fax/letter.

The day before the school event, I was contacted by Channel 2 News (St. Louis) to do a TV interview. A news crew came to the church where I was speaking on Sunday. Though the questions posed were reasonable (and I kept my answers related to science and not the Bible or creation) and said that my presentation the next day would focus on encouraging students to go into a field of science, the reporter (or a producer back in the studio) aired very little of what I said. Most attention was given to Americans United for Separation of Church and State and how my speaking in the school would be unconstitutional.

The following day, all six of my school presentations were observed by teachers and the press. No one found fault in what I taught. Even one of the members of the press, after hearing my talk, said: “I don’t know why I am even here.” After each talk, someone from the press interviewed me, and for some of them, it appeared that they had more interest in creating a sensational story.

A final TV interview was done in the parking lot of the school. The questions were hostile and were not designed to really report on what had occurred that day in the school. She asked, for example: “Why I was causing so much controversy?” I responded that it was not me causing the commotion, but the group called Americans United for Separation of Church and State, who did not even show up (or if they did, lacked the courage to even speak to me). Also, we did not invite ourselves in—the school district called us.

She then asked why a “religious person” should be teaching in a science class. I responded by asking her if that means she would ban great scientists like Isaac Newton or Michael Faraday from teaching in schools. She appeared flustered by that challenge. The rest of her questions centered on religion and why I was there. I continued to answer each of her questions with a challenge or question back to her, which continued to keep her off guard (sometimes she had to agree with me). To my knowledge, that interview has never aired, but I don’t wonder why.

As I reflect on that hectic Monday in front of the classes and the media, it reinforced the fact that not only are our children held hostage by misleading and false science (“molecules-to-man” evolution), but that the secular news media is often more interested in sensationalism than telling the full story. In addition, the media is often more inclined to portray Americans United for Separation of Church and State in a positive light.

As I have read the news stories and TV reports that came out this week (and another story is planned for The St. Louis Post-Dispatch this weekend—go to www.post-dispatch.com this Sunday), I could not find any mention made by the press that my talk was strictly scientific and relevant to what the students were learning in their science classes.

Looking back on this week, I have come to realize that in today’s culture wars in the United States, we no longer have to be concerned just with the secular media and a secular school system turning the minds of young people and adults against the Bible; we also see a self-appointed and so-called “civil liberties” watchdog group (AU) that is often joining the other two as a trinity of opposition to anything that would question evolutionary dogma in the classroom. In the “Show-Me” state, most students still continue to be prevented by these three groups from being shown the real nature of science as it relates to the origin of life. So much for encouraging the development of critical thinking skills for students, one of the hallmarks of education and scientific inquiry.