Can science be studied neutrally, without committing to any worldview? Dr. Georgia Purdom, AiG–US, explains.

A few months ago I received a flyer for a homeschool science curriculum called Real Science-4-Kids. The flyer stated that the curriculum is “worldview-friendly science . . . without the spin.”

I wondered exactly what that meant, so I went to the curriculum website and read the following:

In order for science to be “scientific” it must not commit itself to any one worldview, ideology, philosophical or religious perspective. Science and scientists must be free to follow the evidence where ever it leads. Anything short of this is not real science.

I remember thinking something very similar twelve years ago when I first started researching the origins issue. The evidence would lead me to the truth, I thought. I just needed to follow. 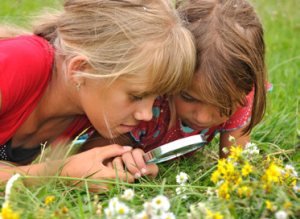 As young people study our world, they need God’s Word. The Bible should be their main lens for true understanding.

But what I discovered instead was that while science itself may be an objective exercise, scientists are not objective—especially in the area of historical science (evolution and creation). Presuppositions and biases play a definitive role in determining how scientists interpret evidence and the conclusions they draw about the past.

There is only one truth source for the past as it concerns the beginnings of the universe, earth, and life—and that is the eyewitness account God gave to us in the book of Genesis. Everything else is merely human opinion, imaginations, and ideas—subject to fallible thinking.

As I looked through the Real Science-4-Kids curriculum, I noticed a mixing of observational science (i.e., the technology that produces airplanes, vaccines, and computers) and historical science. For example, the author of the curriculum wants students to explore the question, “Did God create humans?” She poses these follow-up questions: “Who discovered it? When was it discovered? What is the evidence?”

These questions are not directly applicable because the question “Did God create humans?” is historical science. The follow-up questions fall under the category of observational science.

The curriculum mainly focuses on observational science such as atoms, cells, animals, plants, chemical reactions, laws of physics, planets, stars, and so on. But a closer look revealed it was not “worldview neutral” at all. For example, the biology textbook for grades 4–6 states the following:

The animal kingdom, Animalia, includes ALL of the animals: dogs, cats, frogs, sea urchins, bees, birds, snakes, jellyfish, bunnies, and even us!

This isn’t neutral language at all. You see, biblical creation holds that mankind was created in God’s image separate and distinct from the animals (Genesis 1:26–27). Instead, the language is “friendly” to evolution (and to the Intelligent Design Movement, since many in the ID Movement believe humans evolved from ape-like ancestors).

There is no such thing as being “worldview neutral” because that belief in itself is a worldview! Moreover, Jesus dispelled the myth of neutrality when He stated, “He who is not with Me is against Me, and he who does not gather with Me scatters abroad” (Matthew 12:30).

In an attempt to sell us on the idea that her curriculum is “neutral,” the author states the following:

In my opinion anytime we present information as “undisputed fact,” we have crossed over into “dogma.” This includes both scientific “facts” and religious “facts.”

What does she mean by religious “facts”? Would this include the virgin birth and Resurrection of Jesus Christ? Are they not to be considered undisputed fact and therefore not dogma? If these events in the New Testament did not happen, they would chime the death knell for Christianity (1 Corinthians 15:14). Not affirming the Bible’s authority in Genesis, and the miracles of creation recorded there, is a slippery slope to questioning its authority everywhere else.

Moms and dads: I challenge you to carefully evaluate the books, DVDs, and curricula that your children use (including materials purchased at homeschool conferences) and choose resources that have the Bible as their ultimate authority—and that glorify Jesus as Creator.