by Ken Ham on May 9, 2016
Featured in Answers Update
Share:
Email Using:
Gmail Yahoo! Outlook Other

You are the light of the world. A city that is set on a hill cannot be hidden. Nor do they light a lamp and put it under a basket, but on a lampstand, and it gives light to all who are in the house. Let your light so shine before men, that they may see your good works and glorify your Father in heaven. (Matthew 5:14–16)

God’s Word instructs us to reach the world with the truth of His Word and the gospel. Christians are to be active in shining the light of truth to a world where “men loved darkness rather than light” (John 3:19).

AiG’s website, resources, conferences, media outreaches, and Creation Museum do just that. And now, on July 7 in Northern Kentucky, we will open the Ark Encounter, a life-size Noah’s Ark with 132 exhibit bays containing sensational exhibits. With it, AiG will reach even more of the world and in an even more impactful way.

Now, it’s one thing to build an incredible structure, based on the dimensions of Noah’s Ark in the Bible and to be the biggest timber-frame structure in the world—and which will proclaim the most vital message in the universe. It’s another thing to ensure people will visit.

There’s no point building a world-class themed attraction and have it be one of the best-kept secrets! Now, sometimes I think many churchgoers are happy to keep their Christianity inside the church and their homes instead of “contending for the faith” in reaching the world.

AiG has embarked on perhaps an unprecedented marketing effort for any ministry.

AiG has embarked on what we believe is perhaps an unprecedented marketing effort ever for any ministry. We seek to reach both the Christian and secular worlds to convince as many people as possible to visit the Ark. Using a leading Christian-based, internationally recognized advertising agency, we have launched a major marketing thrust. (Once the Ark opens, we will start a different marketing campaign.)

We began the Ark’s pre-launch campaign on New Year’s Eve by sponsoring the ball drop at Times Square on Fox News. Before and after midnight, millions of viewers saw a powerful commercial, one that has the feel of a trailer for a blockbuster movie. This commercial continues to appear on various TV networks and in digital media. 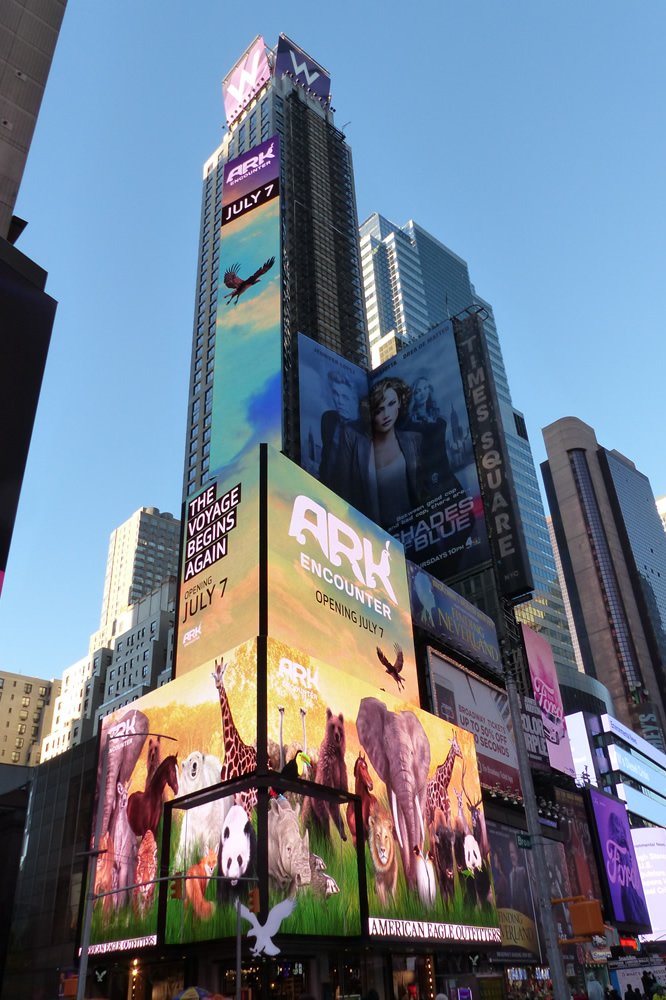 The massive billboard in Times Square

Utilizing powerful secular media outlets like Fox News, ABC TV, The Rush Limbaugh Program, NBC TV, and ION TV, along with dozens of other media groups and websites, the Ark Encounter will be profiled by dozens of media and noticed by hundreds of millions of people. Through the media, Ark staff will present a message of hope and the promise of eternal life for those who believe in Christ.

AiG is going to do everything possible to ensure that everyone in America knows about the Ark Encounter, and we will motivate them to visit the amazing life-size Ark. Then we’ll rely on the Holy Spirit to convict our Ark guests to accept God’s Word as they learn about great heroes of the faith who were obedient to God, and to learn about those who defied Him. 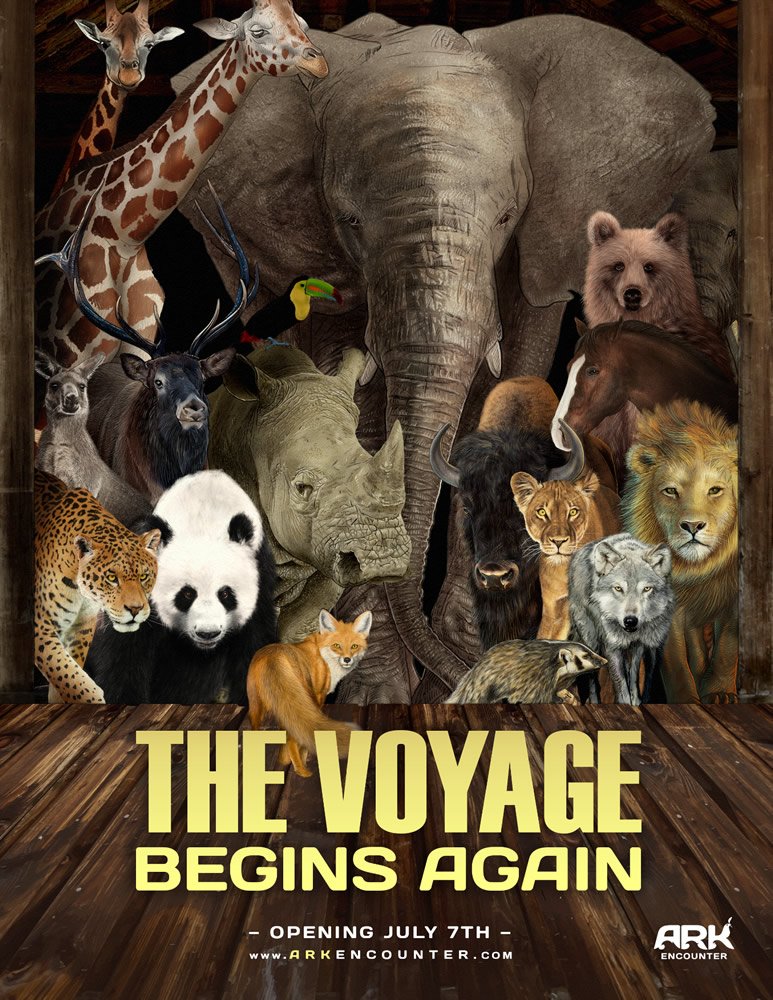 Sample of an ad for print and web

Never before in history have we seen a ministry or church be engaged in this level of strategic and professional communication efforts to ensure that people will hear the gospel. AiG will be using cutting-edge creative media techniques. Watch for them! As I’ve often stated, why shouldn’t we be as professional as the world (or more so) in marketing the most vital message of all to everyone we can? Since we view the gospel message as infinitely more valuable in people’s lives than the material things that are advertised on TV, like flashy cars, cell phones, and beer, we are committed to promoting the Ark Encounter as an exciting, life-changing travel destination for Christians and non-Christians alike.

Please keep this major media blitz in prayer. And when you pray, think of a specific person or family and ask that they will come and experience the Ark Encounter with you!

In addition to the print and TV/radio ads we are paying for (most of it at below marketing prices), we are already seeing increased interest by national and international media in covering the Ark as a news story. Global newspapers, magazines, and websites now regularly conduct interviews with us. In recent times, lengthy articles have appeared in major international outlets like the Toronto Star and, on TV, a major feature on Channel Nine of Australia and many others.

Because Noah’s Ark is so well known worldwide, and because the life-size Ark’s construction and exhibits are so unique in the world, we expect to see phenomenal media interest as we finish construction over the next two months.

Keep up to date at ArkEncounter.com. It’s where you’ll find details about getting tickets for the first 40 days and nights of entry times, as well as tickets for the Ark’s world-class sister attraction, the Creation Museum.

Previous Article Three Exhibits in One Next Article Science—Worldview Neutral?