by A. Peter Galling on September 11, 2008
Share:
Email Using:
Gmail Yahoo! Outlook Other

European scientists have hit the switch to activate the nearly $9 billion Large Hadron Collider. But what will it produce—a mini big bang or more hot air?

Scientists at the European Organization for Nuclear Research (CERN) have hit the switch to activate the nearly $9 billion Large Hadron Collider. But what will it produce—a mini big bang or more hot air?

Flowing champagne marked the startup this week of the Large Hadron Collider (LHC), a nearly 17-mile-long (27 km) tube located 300 feet (91 m) beneath the Swiss–French border. The new LHC is the world’s largest and most powerful particle accelerator, designed to (essentially) hurl two beams of magnet-accelerated particles at each other inside a vacuum, with the inevitable, hoped-for result being some incredible collisions.

CERN researchers separately test fired two proton beams through the LHC, and they plan to begin the actual high-energy collisions in about a month.1 When they do, more than 9,000 magnets2 will accelerate the two proton beams to 99.99978% the speed of light, each transiting the LHC racetrack some 11,000 times per second. At full speed, each proton beam will have an energy equivalent to a car being driven at over 1,000 miles per hour (1700 kph).

The beams will then intersect at predetermined places for “experiments” (as seen in a CNN slideshow), with particles colliding up to 600 million times a second3—all near detectors that will allow scientists to monitor the collisions for “interesting events,” as the BBC puts it. This is despite the fact that the individual particles are so small that the “task of making them collide is akin to firing needles from two positions 10 km [6 mi] apart with such precision that they meet halfway,” CERN’s website explains.

But what are the aspirations for the expensive project, which is already two years late in starting up?4 No less than “revealing fundamental insights into the nature of the cosmos,” the BBC report continues, through the possible appearance of new subatomic particles.

“We will be able to see deeper into matter than ever before. We will be looking at what the universe was made of billionths of a second after the big bang,” explained Tara Shears, a particle physicist at the University of Liverpool. Meanwhile, Imperial College London particle physicist Jim Virdee claims to “definitely know” that researchers will answer the question “what is mass” by using the LHC.

The End of the World?

Much of the news surrounding the LHC carries reports of doomsayers who claim the LHC’s experiments could hasten the end of the world. For example, the Daily Mail reported sensationally on LHC project leader Lyn Evans in an article titled, “Meet Evans the Atom, Who Will End the World on Wednesday.” The article, by Jonathan Petre, started off:

The man behind the world’s biggest scientific experiment, which critics claim could cause the end of the world, is a Welsh miner’s son who has admitted blowing things up as a child.

The Mail and other media outlets quote a few scientists who decry the LHC and claim it could result in world-eating black holes. Some have even gone so far as to file suit—in the European Court of Human Rights and in the U.S. state of Hawaii—that the LHC jeopardizes the right to life.

“The weather will change completely, wiping out life, and very soon the whole planet will be eaten in a magnificent scenario—if you could watch it from the moon. A biblical Armageddon. Even cloud and fire will form, as it says in the Bible,” speculates retired German chemist Otto Rossler, one of the detractors. 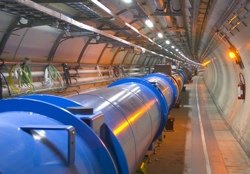 To that, Evans responds, “There are thousands of scientists around the world who have been preparing this machine and they know what they are talking about, unlike these guys.” Interestingly, as the Times reports, famous physicist Stephen Hawking claims that if the LHC does produce black holes, he stands to win a Nobel Prize. However, he thinks the chances of that happening are less than one percent, with it instead being far more likely that he will lose a $100 bet against University of Michigan physicist Gordy Kane over the existence of the Higgs boson.

Furthermore, according to Hawking, the same mathematics that suggest it may be possible for a miniature black hole to arise would require the black hole to immediately decay. “If the collisions in the LHC produced a micro black hole, and this is unlikely, it would just evaporate away again, producing a characteristic pattern of particles,” Hawking said. “Collisions at these and greater energies occur millions of times a day in the Earth’s atmosphere, and nothing terrible happens.”

LHC researcher John Huth, a Harvard University physics professor, echoed Hawking, explaining, “The gravitational force is so weak that you’d have to wait many, many, many, many, many [presumably old-age] lifetimes of the universe before one of these things could [get] big enough to even get close to being a problem.”

A primary quest for the LHC is to create the as-yet unobserved Higgs boson, a theorized particle that would “help explain why matter has mass,” according to CNN. The Higgs boson has even been referred to as the “God particle” because physicists believe it may answer many other lingering “big questions” in physics.

In April, we examined many of the origins-debate questions surrounding the LHC in the article In Search of God, a commentary on a Newsweek interview with Nobel Prize-winning physicist Steven Weinberg about the project.

Also, a common theme in most, if not all, of the news stories describing the LHC is that the experiments there will, e.g., “recreate the conditions of less than a millionth of a second after the [b]ig [b]ang, when there was a hot ‘soup’ of tiny particles called quarks and gluons, to look at how the universe evolved” (in CNN’s words). The hype surrounding the LHC seems to falsely indicate that whatever happens in the LHC experiments, they will in various ways verify the big bang.

However, our guess is that no matter what happens when the beams collide, researchers will use it to justify and/or explain what they believe happened in the moments after the big bang. After all, these scientists have faith that they are recreating big bang conditions; they will likewise have faith that the results mimic the “original” big bang.

The problem is that because the big bang was (allegedly) a one-time event—just like creation in Genesis—no amount of “repeating it” nor any scientific experiments could provide evidence for it. Rather, it must be accepted on faith, and then the results interpreted within that framework. In other words, the LHC experiments will no more confirm the big bang than creationists could confirm Genesis 1 by shining a flashlight on a swimming pool on a dark night, saying, “Let there be light” and leaning over the surface of the deep.

If the Higgs boson is discovered, there is little doubt it will be held up as partial proof for the big bang model of origins. Yet subatomic particles, and the related physics, can also be explained within a biblical model of origins. Having faith in God’s account of origins (presented in Genesis) means that we, too, will be able to interpret and explain whatever good observational science the physicists conduct at the LHC.