Last year, researchers reported evidence of microbes in the upper stratosphere, and recent tests have apparently confirmed their discovery. Exciting news—the discovery of life in space—but one question remains: was it life from space?

The discovery of living creatures at this altitude—41 km (25 miles)—is truly amazing, but it doesn’t explain all the media attention. The real reason for the interest is the researchers” claim that their discovery supports a way-out hypothesis about the origin of life—“panspermia”. This is the belief that life evolved (and is maybe still evolving) “out there” in the universe, and that the Earth was “seeded” with life some 3.8 billion years ago. In fact, some of its proponents believe that microscopic life is still periodically carried to Earth in the interior of comets. This hypothesis was first proposed in detail by the Swedish chemist and Nobel Laureate Svante Arrhenius (1859–1927). He proposed that light pressure could propel spores vast distances across space.

First, the facts. According to a press release by Cardiff University’s Centre for Astrobiology (UK):

“… Several research institutes in India collaborated on a path-breaking project to send balloon-borne sterile ‘cryosamplers’ into the stratosphere. … Large volumes of air from the stratosphere at heights ranging from 20 to 41 km [13 to 26 miles] were collected on 21 January 2001. … Dr Milton Wainwright of Sheffield University’s Department of Molecular Biology and Biotechnology … isolated a fungus and two bacteria from one of the space derived samples collected at 41 km. The presence of bacteria in these samples was then independently confirmed. … The isolated organisms are very similar to known terrestrial varieties … [but] it should be stressed that these microorganisms are not common laboratory contaminants.”1

According to a paper printed in FEMS Microbiology Letters,2 the researchers went to great lengths to avoid contamination, and they displayed ingenuity in coaxing the samples to reproduce. Dr Wainwright isolated two species of bacteria—Bacillus simplex and Staphylococcus pasteuri—and one fungus, Engyodontium album. He said that these species are not typical contaminants, and they’ve never been grown in the lab where they were isolated.

But the real science stops here.

Now for the rest of it. When interpreting scientific observations, it’s important first to recognize the bias of the observer. The press release came from the Centre of Astrobiology, directed by Chandra Wickramasinghe. He, together with the late Fred Hoyle, is the one who first proposed the idea of comets seeding life on Earth. It’s not necessarily wrong for him to have a bias—both creationists and evolutionists have them, it is just important to acknowledge the bias upfront.

Wickramasinghe’s bias, however, has led him to conclude far more than is warranted by the evidence. The discovery of life in space does not tell you where that life originated. Yet Wickramasinghe boldly told a United Press reporter that “the findings support the idea of panspermia, the theory that comets not only brought the first living microorganisms to Earth 4 billion years ago but that they must also be doing that at the present time.”3

His theory proposes that Earth’s bacteria evolved from space microbes in the first place.

Here’s the line of reasoning that Wickramasinghe gave the reporter. Finding microbes like ones on Earth is what his theory “predicts”, he said, because his theory proposes that Earth’s bacteria evolved from space microbes in the first place. “They’re extremely closely related to known Earth bacteria but that’s what the theory of panspermia predicts”, Wickramasinghe explained.4

But in fact this is also what a much more mundane hypothesis would predict. Namely that bacteria from Earth were wafted 41 km into space. You would expect samples in space to be similar to bacteria on Earth. But if you hypothesize that space-borne bacteria adapted to the Earth’s changing conditions over billions of years, countless trillions of bacterial generations, then you would not expect modern samples from space to be identical to bacteria on Earth.

As AiG said in a preliminary report,5 something is strange about a claim that it’s more likely for bacteria to come from distant comets, trillions of km away, than from Earth, 41 km away.6 The data certainly didn’t lead to this conclusion—it’s something that researchers believed before they collected any evidence. 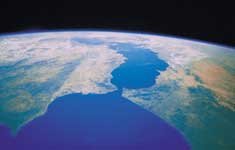 “Contamination is always a possibility in such studies but the ‘internal logic’ of the findings points strongly to the organisms being isolated in space, at a height of 41 km. Of course the results would have been more readily accepted and lauded by critics had we isolated novel organisms, or ones with NASA written on them! However, we can only report what we have found in good faith.”7

Origin of life—an insurmountable problem. Whether it came from space or from Earth, the origin of the first microorganism remains a huge problem for evolutionists. In fact, this problem was the motive behind panspermia in the first place. The modern pioneer of panspermia, Arrhenius, was also motivated by “the failure of repeated attempts made by eminent biologists to discover a single case of spontaneous generation of life.”8 Francis Crick, a prominent advocate of “Directed Panspermia” (deliberate seeding of life by aliens) was also motivated by repeated failures of “chemical evolution”. As Wickramasinghe explained to space.com, it is mathematically impossible for life to have evolved on Earth:

“… The emergence of life from a primordial soup on the Earth is merely an article of faith that scientists are finding difficult to shed. There is no experimental evidence to support this at the present time.

“Indeed all attempts to create life from non-life, starting from Pasteur, have been unsuccessful. Also recent geological evidence indicates that life was present on Earth over 3.6 billion years ago, at a time when the Earth was being pummeled by comet and meteorite impacts, and no primordial soup could have been expected to brew.

“Not all microbes in interstellar space would survive of course, but the survival of even a minute fraction of microbes leaving one solar system and reaching the next site of planet formation would be enough for panspermia to be overwhelmingly more probable than starting life from scratch in a new location.

“The odds against microbes surviving such a space journey pales into insignificance when compared with the insuperable odds against starting life anew in a warm little pond on the Earth.”9

But Hoyle and Wickramasinghe came to realize that the odds of generating the genetic information needed for even the simplest life form were too improbable, even if the whole universe were a primordial soup. Even the simplest bacteria are far too complex to have evolved—they must have been created. Hoyle and Wickramasinghe believed that the creator was within the cosmos, but Genesis makes it clear who the Creator was, and it tells us that He created all the kinds of life about 6,000 years ago.