Did you know that most public-school biology textbooks continue to use content that has long since been disproven?

One such case is the famous 1953 Stanley Miller laboratory experiment, which was originally thought successful in creating the building blocks of life from lifeless chemicals. Why do such examples continue to be included in textbooks? Simple—they help further the evolutionary viewpoint that says life arose from nonlife in a pool of chemicals billions of years ago. 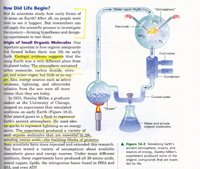 Textbooks, like Prentice Hall's Biology: Exploring Life(2006), continue to promote the idea that Stanley Miller's experiment proves that life (could have) originated from simple chemicals without acknowledging the chemical limitations of the experiment.

Although secular textbooks continue to state that Miller was successful in creating amino acids necessary for life, the textbooks and media fail to mention that what Miller actually produced was a mixture of left and right-handed amino acids, which is detrimental to life. Since then, similar experiments have also failed to prove this idea.

Coming Soon: In the next issue, we will take an in-depth look at evolutionary content that continues to find its way into today’s most popular biology textbooks, even though much of it has been found to be outdated and disproven.