Anyone interested in the topic of Noah’s Ark sooner or later will encounter the term “moonpool.”

Anyone interested in the topic of Noah’s Ark sooner or later will encounter the term “moonpool.” Although the concept has been around a long time, it wasn’t used much until recently with the arrival of drill ships designed for oil exploration. 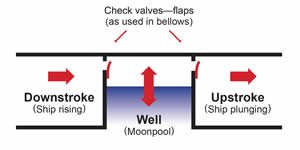 What is a moonpool? Well, picture a ship with a hole in the bottom of the hull and a wall surrounding the hole all the way up through the top deck—in the Ark’s case, the roof. Water won’t enter the ship because it’s contained inside the moonpool’s walls, moving up and down like a piston as the ship rides the waves.

Why may Noah have put a hole in his ship on purpose? There are several sound engineering reasons.

First, a hole in the bottom of a long ship, as was the Ark, would help relieve hull stress as the vessel crested a wave.

Second, the rising and falling water within the moonpool could be used to draw in fresh air and also extract stale air.

Third, recent research has shown that moonpools induce resistance to movement.1 For Noah’s ship, this may have dampened wave motion, making the voyage more tolerable for man and beast.

Did Noah include a moonpool into the Ark’s design? We can’t be certain, but if the Ark is ever found (doubtful), it will tell us much about man’s engineering ability before the Flood and God’s provision for Noah, his family, and the animals. Until then, you will be able to see a moonpool in action at the future Ark Encounter, south of Cincinnati.