Thousands of hands have touched the new, full-size Ark replica. Building it took devoted artisans who believe real people originally made it happen.

The warmth from the earthenware firepot cast a cozy glow, as the flames danced against the embroidered cushions nearby. The seasoned vegetables stewed on the ledge atop the chimney, releasing a pleasing aroma. Flute music wafted down the wooden corridors of the Ark. Two by two, people drifted into the eating area to take their places at the table, chattering about the morning’s escapades.

Bringing Noah’s Ark to life requires more than cutting the right number of logs and planks to finish out the hull, or providing facts and figures to show how eight people could feed thousands of animals. Noah and his family were real people, just like you and me, facing real challenges. That includes the minute details of daily life. If eight people once endured the rigors of a yearlong voyage, then they must have experienced the same sorts of trials and longings any other family would face in similar conditions.

That’s why interior designers, seamstresses, carpenters, and other specialists were needed to complete the Ark Encounter theme park that opens in Kentucky this month. The Bible’s account of Noah is one every family can relate to. His family not only had the necessary abilities to pull it off (possibly with the help of hired hands), but they also worked and lived together, as any other normal people—in any era—would have to. 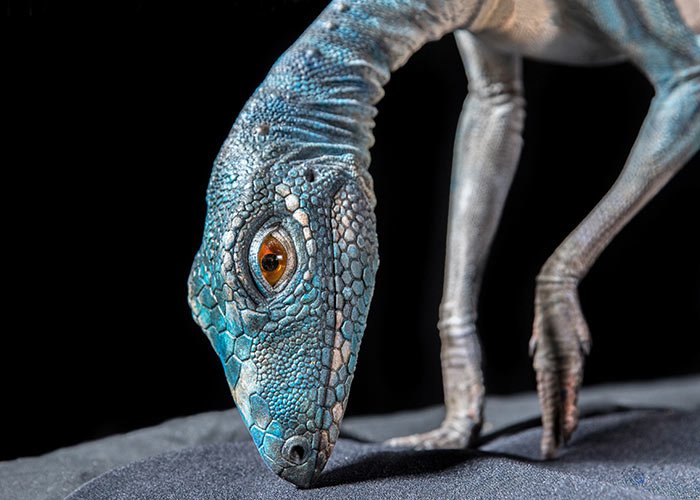 Visitors to the Ark Encounter will see expertly sculpted animals, including dinosaurs that took refuge in the Ark.

The production designers at the Ark Encounter thought through thousands of important details. I had a chance to walk through the design shop with Kristen Andersen before the Ark opened. She has spent her life in set design, first in Los Angeles before coming to Kentucky. As a mom of a young teenager, Kristen found herself solving questions for Noah’s family in the same way she would solve them for her own family. In the process, Noah and his family became even more real for her.

She had to reimagine the intricacies of their living quarters, kitchen, and eating area. Could they have planted a small garden with shade-loving fresh vegetables? How might each married couple have decorated their bedroom? Sure, they probably solved these details a slightly different way, but they faced the same questions we do.

“Noah was righteous in his generation. But we also share in his humanity. He’s not just this distant, amazing person. He was like you and me.”

Taking inspiration from what we know of ancient ways of life, Kristen imagined how each couple’s story unfolded. When people see her choices, they may wonder, “Couldn’t these people have done it another way?” And that’s the point! Kristen wants guests at the Ark Encounter to imagine what life was like for real people—because they were real people on a real, yearlong journey.

Look at the earthenware Shem’s wife used to store her paint set. She loved to paint! Okay, maybe it was Ham’s wife who loved to paint, while Shem’s wife loved pottery. But both women really did have personal passions because they were real people. Individual personalities make the Ark passengers real. Did Ham love astronomy and plants? Or was it Japheth?

How appropriate if Noah’s wife was obsessed with herbs and healthy foods to encourage her family’s wellness! A handcrafted flute adds a perfect touch, since it is one of the most popular musical instruments in the ancient world. It’s even found among the artifacts of Neanderthal people.

In all, the Ark Encounter has over 100 bays’ worth of exhibits, each with realistic details that bring the biblical account to life. Different kinds of lighting and the sounds of snorting beasts or a creaking ship greet you at every turn, over three decks. You’ll find lifelike creatures of all shapes and sizes, handwoven blankets and tapestries, carvings, hanging planters, and handcrafted furniture—from an exquisite loom to a leather-accented table that held Noah’s scrolls. Each piece tells part of a passenger’s story. 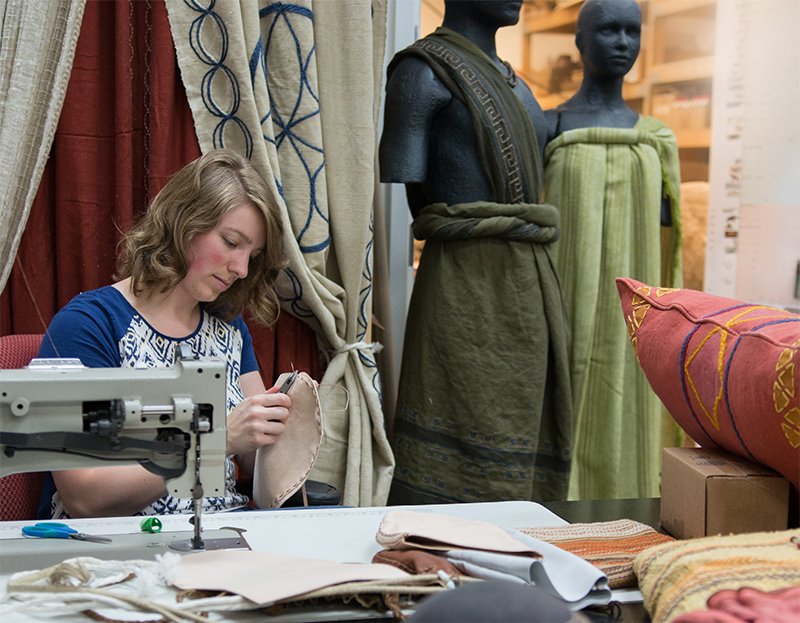 Sandy Wickert is one of many talented artisans who joined the fabrication team at the Ark Encounter theme park.

Dozens of researchers, artisans, craftsmen, and fabricators contributed tens of thousands of hours to make each room look and feel real. By bringing their own life experiences to bear on the process of reimagining the Ark, they have shown that the people on the Ark had to make the same types of choices that craftspeople have made for millennia.

After talking to Kristen, I also sat down with Doug Henderson, the Ark Encounter’s lead artist, and Sandy Wickert, a seamstress, to discuss the monumental details that went into this undertaking.

In Your Opinion What’s the Most Beautiful Part of the Ark?

Sandy: It’s sending a beautiful message to the whole world about God’s truth. A lot of people will say to themselves, “Oh, I never thought about that. Noah had to take care of that. I never really realized the details Noah had to look into and take care of.” This will help people to see the reality of it.

“It’s going to break a lot of stereotypes in how you view the Ark itself. . . . It’s going to redefine how people look at the past.”

Kristen: The animals are the most beautiful part of the Ark. The talent of the artists blows me away.

Are There Any Hidden Details?

Kristen: There are a lot of meaningful details in the Ark. Japheth’s flute, for example, is hand carved by a flute maker from Erik the Flutemaker Ministries. He’s really into the study of recreating flutes from artifacts with ancient material to hear what the sounds actually sounded like.

How Do You Feel the Ark Will Impact the Culture?

Doug: Christians will be strengthened in their faith. And it will draw people who don’t know Christ to Him.

Kristen: I think it’s going to break a lot of stereotypes out there about ancient man, and what it was like before the Flood. Human beings were sophisticated, not dumb brutes. The Ark was real—a sophisticated, man-made structure following God’s instructions. It’s going to redefine how people look at the past.

How Has Working on the Ark Impacted You?

Kristen: Noah was righteous in his generation. But we also share in his humanity. He’s not just this distant, amazing person. He was like you and me. It’s a connection, an access point, to connect the dots of historical evidence to the pre-Flood world.

Sandy: It definitely challenged how I think about some things. It changed my perspective, gathering more information and learning the names of some of these unusual animals.

What About Noah and His Family Most Inspires You?

Doug: Noah’s obedience most inspires me. It all comes down to trusting God to work out the details we can’t control.

Sandy: The courage of Noah’s family, in spite of what was going on around them in the culture, inspires me. I am sure they were ridiculed: “Yeah, sure, a flood is coming. Uh, okay guys.” Through all this, Noah remained steadfast and pursued God’s will.

Kristen: The fact that he survived inspires me. His faith was so strong. They were able to build this immense structure and carry on humanity.

Kimberly Leinstock is a staff member in the advancement department at Answers in Genesis. She holds a BA in linguistics and literature from Seattle Pacific University and an MBS from Liberty University.