In spite of its revolutionary philosophic impact, Darwin’s concept of natural selection is quite easy to understand (and to misunderstand). It was based on observations of artificial selection, the results of selective breeding by farmers and animal fanciers. Darwin, for example, referred to all the diﬀerent breeds of pigeons that had been produced by artificial selection.

The ordinary one in Figure 11A is the wild rock pigeon, the one you often find around city statues and country barns. But all the other birds pictured are just pigeons, too: the fan tail, the one with the neck pouch, etc. All these birds can be bred from the wild rock pigeon, and crossing among the diﬀerent varieties can lead right back to the wild rock pigeon. Everyone knows, of course, about the results of selective breeding with dogs, cats, cattle, roses, and so on. 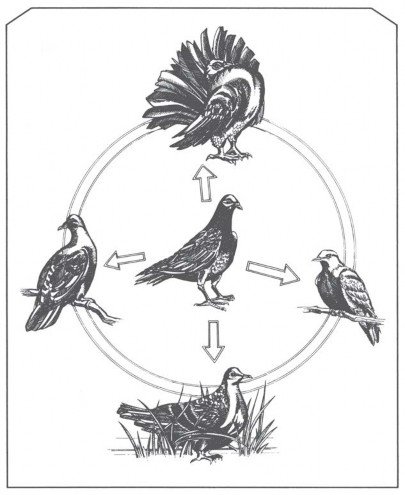 Figure 11A. By artificial selection, all the “fancy” varieties of pigeons above have been bred from the common wild rock pigeon, and they can be bred back to the wild rock pigeon (just as special varieties of dogs and cats can be bred from and to the “mongrel” types). Darwin used artificial selection, selective breeding by man, as a model for natural selection, survival of the fittest selected by nature in the struggle for life. But does natural selection lead to evolution, or point back to the biblical concept of a corrupted creation?

“So,” Darwin said, in eﬀect, “we see what artificial selection by man can do. I believe selection can also happen in nature. After all, there is a constant ‘struggle for survival’ because of population growth and limited resources, and certainly each kind can produce many varieties. Therefore, there will be ‘survival of the fittest,’ or natural selection, of those varieties of a population that fit best into their environments. Given enough generations [time] and the right trait combinations [chance], organisms that seem designed for their environment will simply result from natural selection [struggle and death].”

Replacing the Creator God with what he called the “war of nature,” Darwin claimed that all appearance of design in biology is the result of time, chance, struggle, and death—the process of “natural selection.” Is there any evidence that Darwin was right? Can nature select as well as man? Answer: There is considerable evidence that Darwin was indeed correct about natural selection and the “war of nature.”

For over 50 years, the prime example of natural selection used in textbooks, museum displays, and TV programs has been the peppered moths. Take a look first at the top photo in Figure 11B, which represents a camera close-up of tree bark with some moths on it. How many moths do you see? One is easy to see, and most people see two. (Some claim to see three, but I’ve never found the third!) At least we can agree that one moth stands out and one is camouflaged. Presumably, that’s the way birds saw it, too, back in the 1850s. The darker moth stood out, but the lighter one was camouflaged against the mottled gray lichen that encrusted the trees back then. As a result, birds ate mostly dark moths, and light moths made up over 98 percent of the population. 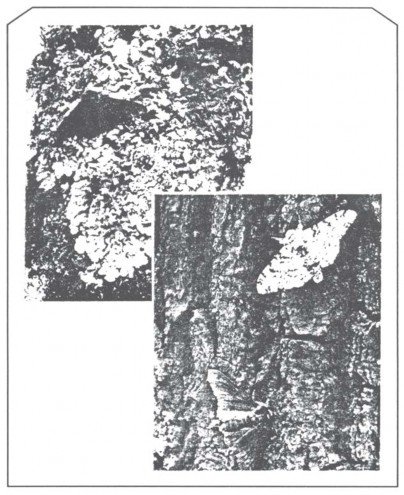 Figure 11B. Light moths so common in 1850 (well-camouflaged in the top photo) lost out in the struggle for life to the more “fit” variety (camouflaged by the dark, polluted background in the bottom photo). By 1950, most of the moths were the dark (melanic) variety.

NOTE: It was discovered recently, however, that these famous photographs show dead moths glued to tree trunks. Live peppered moths flying among the branches can recognize camouflaging backgrounds (a “habitat choice” instinct) and/or migrate out of the polluted area. Still, the peppered moth story as originally told does seem to provide at least logical evidence for natural selection. But, can it really be called “evolution going on today”?

But then pollution killed the lichen on the trees, revealing the dark color of the bark. As a result, the dark moths were more camouflaged than the light ones. Thus, the dark ones had a better chance of surviving and leaving more oﬀspring to grow into dark moths in succeeding generations. Sure enough, just as Darwin would have predicted, the population shifted. The “dark environment” just naturally selected the dark moths as more likely to survive and reproduce. By the 1950s, the population was over 98 percent dark, proof positive of “evolution going on today.” At least that’s the way it’s stated in many biology books, and that’s what I used to tell my biology students.

Previous Chapter 2.1 Design Without a Designer Next Chapter 2.3 Change, Yes; Evolution, No