Graffiti Alley and the Decay of the West

by Michael Belknap on July 1, 2013
Featured in A Tour of the Creation Museum Series
Share:
Email Using:
Gmail Yahoo! Outlook Other

Graffiti Alley provides a glimpse of what happens when we reject God’s clear, objective account of His creation—a creation that is ultimately composed and sustained by the word of God.

As you exit the vibrant Biblical Authority and Relevance rooms, you find yourself in a dimly lit corridor. You have entered Graffiti Alley. Here visitors are reminded of an important truth: when the Church compromises on the authority of Scripture, the consequences are severe and far-reaching.

Today, attacks on the authority of God’s Word focus primarily on the book of Genesis. Graffiti Alley provides a glimpse of what happens when we reject God’s clear, objective account of His creation—a creation that is ultimately composed and sustained by the word of God (note “then God said” repeated throughout Genesis 1; cf. Psalm 33:6–9; Hebrews 1:3).1

Our only alternative then is to arbitrarily embrace subjective, materialistic fantasies devoid of legitimate authority or meaning. Indeed, there are ultimately only two options: God’s revealed Word to mankind, or the futility of human desires and opinions (Ephesians 4:17–19). Simply put, we can only turn either to the Word of Christ or to some variation of the lie—as the serpent said to Eve, “‘Has God indeed said . . . ?’” (Genesis 3:1). 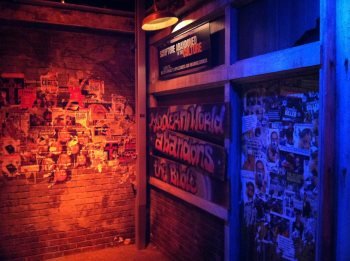 Sadly, much of what guests witness in Graffiti Alley will likely seem familiar. This isn’t a representation of a fictitious “post-apocalyptic” world; it is a glimpse into the direction of modern Western culture today—the spirit of our age. This is a world of moral relativism, where anarchy or another godless system is hailed as king.

What we witness here confirms a principle tucked away in Judges 17:6, where we find that “in those days there was no king in Israel; everyone did what was right in his own eyes” (cf. Judges 21:25; Proverbs 12:15; 21:2). In other words, whenever the objective standards of God are rejected, men will abide by their own subjective standards. We call this autonomy, meaning “self-law.”

So the broader philosophies behind this outlook are far from novel; and indeed, as the Preacher said, “there is nothing new under the sun” (Ecclesiastes 1:9). The Apostle Paul alluded to this sort of thinking when he said, “If the dead do not rise, ‘Let us eat and drink, for tomorrow we die!’” (1 Corinthians 15:32; cf. Isaiah 22:13). The modern philosophical term for this is hedonistic nihilism—hedonism being “the doctrine that pleasure or happiness is the sole or chief good in life,”2 and nihilism being “a viewpoint that traditional values and beliefs are unfounded and that existence is senseless and useless; a doctrine that denies any objective ground of truth and especially of moral truths.”3

Of course, the great irony of nihilism (or any other form of moral relativism) is that it is self-refuting. To provide even a basic definition of nihilism—to say that there are no absolutes—is to make an absolute statement. On this basis we can affirm that hedonistic nihilism is also self-refuting: hedonists value pleasure but nihilists see everything as meaningless, therefore they cannot ascribe value to that which is “most pleasurable” or “least painful.”

Unfortunately, most people living this type of lifestyle either do not care or cannot see that the logic behind their worldview is inherently flawed. Then again, we should anticipate this: proper wisdom and knowledge comes only from knowing God—the sole source of all things—and those who truly know God fear Him (Psalms 111:10; Job 28:28; Proverbs 1:7). 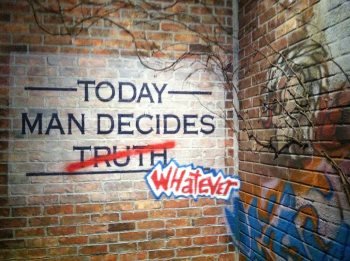 Furthermore, since the proper unity of all things is found only in Christ (Ephesians 1:10), it follows that any system disavowing the source of unity—Christ Himself—will be marked by disunity. So this is not some temporary lapse of consistency on the part of the unbeliever, soon to be improved upon or remedied. Rather, this fracturing—this separation, this form of death, this foolishness—is the natural state of those who are outside of Christ (Psalms 14:1; Ecclesiastes 2:14).

After rounding the last corner of Graffiti Alley, one final reminder on the wall reads, “Today man decides truth.” Apparently, some would deem even this modernistic slogan of humanism too concrete, as they have spray-painted a line across the word truth and replaced it with a term more palatable to their nihilistic tastes: whatever.

God’s Word: Lifeblood of the West

Looking around at our ever-increasingly secular culture, and noting a preoccupation with revisionism, some (particularly those of the younger generations) may ask, “Was the West always this way?” The Biblical Relevance room gives us a hint—the short answer is no. What we are experiencing now is less a representation of Western culture and more the death of it. What many today don’t realize is that the development of our broader civilization was really a direct result of pagan tribes embracing Christ in fifth-century Germany—a culture that was revitalized and advanced during the sixteenth-century Protestant Reformation.

We can see the mindset of the Reformers in their rallying cry: sola scriptura, “by Scripture alone.” Truly, God’s Word is the lifeblood of the West. But just as our culture developed as the result of regular Christians walking faithfully before God, submitting to His Word on a daily basis, so too the abandonment of living out sola scriptura has rendered the West an empty shell, bereft of life—death seeking death.

As Western culture atrophies, there are some important things to remember from Graffiti Alley. The reason that our civilization is withering away is because of our sin. We can see throughout biblical history that when God judges a people, one of the things He does prior to their collapse is to turn them over to their sins. In other words, He gives them what they most desire.

The wickedness we see being embraced in our culture—abortions, sodomy, heresies, and the like—are not simply acts worthy of judgment, they simultaneously are the judgment (e.g., Romans 1:24–32). As a people, we are heaping up condemnation for ourselves—exponentially (Romans 2:5). Since the West has sought to remove itself from its biblical foundation, the Lord has allowed us to experience the effects of that shift.

How Should Christians Respond?

So, what do we do? As believers who acknowledge that the God of history has declared the end from the beginning (Isaiah 46:10), we must first and foremost be faithful to Him. Christians, remember God: pray, search the Scriptures, and be obedient in all things. Just as we will all face judgment as individuals, our first order of business is one-on-one with our Creator.

Self-control is the most fundamental level of human governance. In other words, Christian, the big picture starts with you. For every indicative there is a corresponding imperative. Are you saved? Then go act saved. According to Scripture, believers are “created in Christ Jesus for good works, which God prepared beforehand that we should walk in them” (Ephesians 2:10). As a follower of Christ, your aim should be to follow the command to “be holy in all your conduct” (1 Peter 1:15).

Next, we need to realize that the omnipotent God of the Resurrection is able to bring life to a dying civilization. We should ask God to perform a “new reformation” of the West, returning us to the authority of God’s Word to “bring us back to life” as a nation. For our God is the God of reformation whose power can raise the dead (John 5:21; Acts 26:8; 2 Corinthians 1:9). We acknowledge that “unless the Lord builds the house, they labor in vain who build it; unless the Lord guards the city, the watchman stays awake in vain” (Psalms 127:1). Certainly the righteous Judge of the whole earth—the King of kings and Lord of lords—has no obligation to resurrect any rebellious nation. However, let us not forget that it is Jesus Christ who builds His church and that “‘the gates of Hades shall not prevail against it’” (Matthew 16:18).

Lastly, we need to remember that the moral disintegration we see around us is largely the result of the church not living in accordance with what the Scriptures teach. If the church fails to repent and stand firm on the authoritative Word of God, then the decomposition of Western culture will certainly persist. For the Lord’s established pattern is that judgment begins in the household of God (1 Peter 4:17). Indeed, how can the world bow the knee to Christ if His church won’t show them how?