on February 5, 2013
Featured in A Tour of the Creation Museum Series
Share:
Email Using:
Gmail Yahoo! Outlook Other

One of the primary goals of both Answers in Genesis and the Creation Museum is to emphasize the authority of Scripture in every area of life.

One of the primary goals of both Answers in Genesis and the Creation Museum is to emphasize the authority of Scripture in every area of life. Since the Bible is God’s Word, and since He cannot lie or make mistakes, then it follows that His Word is true from beginning to end. As such, the authority of Scripture is stressed at the Creation Museum very early in the walkthrough.

After examining the two different starting points—God’s Word or man’s word—guests enter the Biblical Authority Room, which illustrates reasons why we should believe God’s Word to be true. You’ll find examples of witnesses down through the ages who attest to the truthfulness of God’s Word; Old Testament prophets, New Testament Apostles, and Jesus Christ were completely united in their teaching. Six biblical figures are depicted in poses consistent with their descriptions in Scripture: Moses holds the tablets of the Ten Commandments, David plays a harp, Isaiah holds a scroll, Paul writes a letter, and Peter and John arrive at the empty tomb. These men were eyewitnesses to many of God’s mighty deeds, and the Holy Spirit guided them to record some of these things for us. 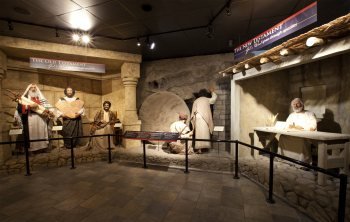 Opposite these figures are signs and a video designed to focus one’s attention on the Bible. The video ensures that people will be saturated with Scripture in this room. One sign cites a passage reminding us that God’s Word offers hope in a world of hopelessness. Another sign shows reasons why we can believe that Scripture is true, most notably is that God Himself inspired the words of Scripture and He cannot lie.

As guests continue toward the next room, they are presented with some of the many attacks that have been launched against Scripture. Far more than any other book, the Bible has been the target of skeptics and critics. These assaults against the Word of God began with the serpent in the garden. Since that time, God’s Word has survived attempts to question, destroy, discredit, criticize, poison, and replace it. One of the greatest attacks of our day centers on the biblical teaching about the age of the earth. Christians need to recognize that the teaching of millions of years is actually an attack on the Word of God and an attempt to undermine its authority. 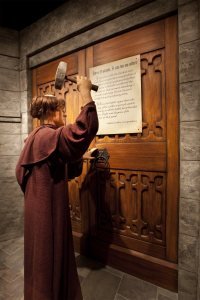 The Biblical Relevance Room shows the significance of God’s Word in our lives and includes a partial history of how the Scriptures have been compromised through the ages. At the start, two highlights from Martin Luther’s life are portrayed in a representation of his famous nailing of the 95 Theses to the Castle Church door in Wittenberg. In the museum’s display, Luther nails his renowned words spoken during his defense at the Diet of Worms when he spoke of his conscience being captive to the Word of God.1

The final portion of the room shows how various people within the church have undermined the authority of God’s Word by attempting to harmonize it with ideas like millions of years and evolution. A video and three-dimensional display explains the catastrophic compromise that took place during the Scopes Trial and the efforts people have put forth to use this incident against biblical creationists.

As visitors exit this room, they are left with a somber reminder of the dangers of compromising God’s Word with man’s ideas. Early in his life, Charles Templeton was a famous evangelist with Youth for Christ International who traveled and spoke alongside Billy Graham. But as Templeton began to accept the teachings of evolution and millions of years, he started doubting the Word of God. Eventually he walked away from the Christian faith and published a book called Farewell to God six years before his death in 2001.

Answers in Genesis and the Creation Museum call the church to a reformation—by making Scripture alone the authority for every believer’s life, including our understanding of history and science. The Biblical Authority and Relevance Rooms give visitors a vivid description of the importance of holding to the Bible as the ultimate authority in one’s life, which along with sharing the gospel is the main purpose of the Creation Museum. The next rooms will show some of the consequences of the compromise noted in the Biblical Relevance Room.