Prejudiced about “Race” and the Creation Museum

We recently received an email from someone who took a swipe at the Creation Museum and Answers in Genesis. This started what turned out to be a particularly revealing exchange of emails.

Five years ago this weekend, the Creation Museum opened in northern Kentucky (near Cincinnati). There were protests by atheists and others at the gate on that Memorial Day weekend, but opposition is to be expected in a world that is divided between those who believe in God’s authoritative Word, the Bible, and those who reject it. What is sadder is when the museum is on the receiving end of attacks from professing Christians who are prejudiced against the museum and base their opposition on wrong information.

We recently received an email from someone who took a swipe at the Creation Museum and Answers in Genesis (which operates the museum). This started what turned out to be a particularly revealing exchange of emails because her criticism was based on a completely wrong understanding of one of the museum’s teaching points. We believe that sharing the email exchange AiG had with her will be instructive to our web readers. Not only will this demonstrate another sad example of compromise within Christendom, but it will also show how easy it is to feed your own prejudices by uncritically accepting second-hand information, and it will assist people in dealing with one of the hot-button topics of the day—racism.

Here is the email exchange (slightly edited) that AiG had with someone in Sacramento, California, who appears to be a theistic evolutionist.

Genesis 2:7 is one reason why I do not appreciate you portraying “Adam” and “Eve” as “white” as you apparently do in your museum, even though I myself am mostly European American. Life probably also probably originated out of what is now Africa.

Our first email in reply was the following: 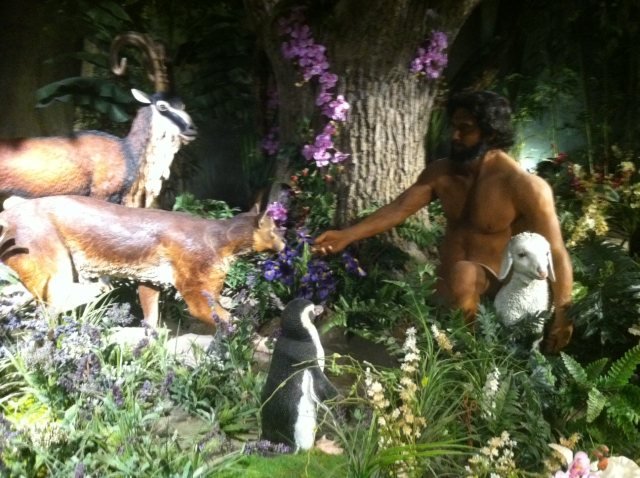 Sorry, but you have been misinformed. Adam and Eve are portrayed as middle brown in skin shade in the museum. See photo attached (which I took for you this morning on my smartphone), and please read this article from a PhD geneticist on our staff:

May I ask: where did you hear we depicted Adam as white?

Also, we have an anti-racism website, www.OneHumanRace.com, which contains articles and videos declaring that Adam and Eve were middle brown. Please check it out.

For the evidence that refutes the contention that humans evolved from ape-like creatures in Africa, go to item at http://www.answersingenesis.org/articles/2011/06/11/news-to-note-06112011

Please let me know you received my email. We have had server difficulties recently. Thank you.

Yes, I got your email, but I saw from pictures of museum and your scan cam that your “Adam” is portrayed with modern European features with a tan, as well as the other people you present from the Bible. Would it bother you that the first people probably looked like Aborigines?

Also I have known about the OneHumanRace.org site before, which also doesn’t discuss America’s support of Zionists to commit “racism” … [and the creation of] hateful and racist policies just because of what happened to “Jews” in the Third Reich. ….

We then replied as follows: 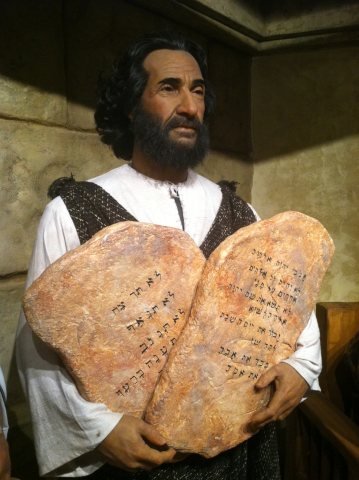 Thank you. The first people were almost certainly middle brown in skin shade – “Middle Eastern” brown, if you will. I have travelled to the Middle East three times (as recently as September—in Jordan), and the people there generally don’t look European (although some light-skinned Egyptians and Jordanians could pass for coming from southern Italy, for example).

You also wrote that “other people you present from the Bible” inside our museum have a European appearance. Many of our museum models feature biblical characters that are darker-skinned. The photo attached is of Moses in our museum (taken on my smart phone)—he is certainly not depicted in a European way.

Our museum does not tackle all forms of racism. Since we are a creationist group, we are primarily exposing evolution-influenced racism. For example, we discuss the Holocaust because of the influence that evolutionary ideas had on the leaders of the Third Reich. We are careful not to say, though, that evolution causes racism—but racists can use evolution to justify their actions.

My guess is that you have not toured our museum. May I ask, then: what is the source of the false claims you have heard about the museum? Apparently your source is highly misinformed and may have an agenda against us.

After repeated email attempts, we could not get Michelle to retract her false charge, even with all the evidence we could muster to contradict her accusation. Nor did we find out how she came to her wrong conclusion.

AiG finds it quite ironic that while a good portion of our exhibit on the Genesis account of the Tower of Babel relates to the origin of the so-called “races” and also offers the vital message of racial reconciliation, we were criticized for not being racially conscious. Her insinuation that we held certain prejudices about people groups is also ironic, considering that she was the one who engaged in prejudging. In addition to this major anti-racism exhibit inside the museum, AiG has authored or co-authored books on this topic discussing the formation of all the different people groups (“races”) around the world, and has produced two associated videos. We do not believe our email correspondent has ever toured the Creation Museum to discover for herself what we really believe about the origin of people groups, and she has revealed her own prejudice against the museum. 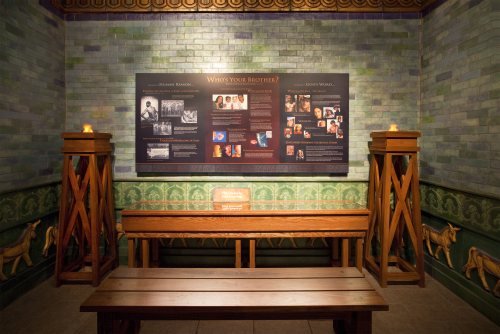 This is a part of the museum’s section devoted to answering the often-asked question: where did all the different people groups come from? It also presents a positive message of racial reconciliation.