Recently, some atheists have accused me and the Creation Museum of teaching the so-called “curse of Ham”—which we don’t and isn’t even in the Bible!

Now, I often jokingly say that I’m pretty sensitive about this issue, since my last name is “Ham.” Seriously, I think it’s  important that people understand that we don’t teach the “curse of Ham”—or that dark-skinned peoples are “cursed.”

“Then he said: ‘Cursed be Canaan; A servant of servants He shall be to his brethren.’” (Genesis 9:25)

Some of these atheists then use the statement (made to Canaan) about “servants” to claim we teach that dark-skinned people would be slaves.  All this is so, so wrong.

Ham had four sons. Canaan was the youngest of the four. While Scripture is unclear about why exactly Noah cursed Canaan for Ham’s sin, what we can be clear about is that Noah’s curse had nothing to do with skin tone. Noah’s curse had to do with a rebellious son, not skin color.  One only has to look at Canaan’s descendants to see some of the most-wicked rebellious people who ever lived and who were judged for their godlessness and immorality.  (For more information on the possible reasons for the curse on Canaan, see Troy Lacey’s article “The Curse of Canaan.”) 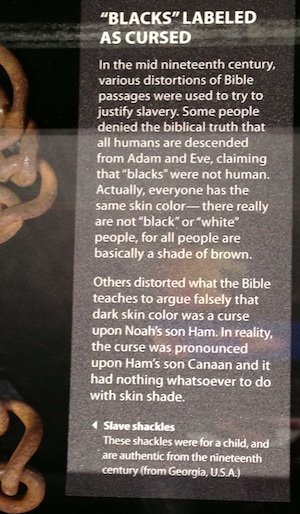 Part of the anti-racism exhibit in the Creation Museum that repudiates the so-called “curse of Ham.”

What is frustrating as I read these totally false charges against the museum is that we have an anti-racism exhibit inside the museum, and it very specifically teaches against a supposed “curse of Ham.” In a museum display, we declare that it is wrong to argue “that dark skin color was a curse upon Noah’s son Ham.” Yet opponents of the museum say it teaches a “curse of Ham.” Incredible.

Of course, many atheist bloggers simply don’t do proper research (even though some of them possess PhDs, and so you’d think they would do their research) or simply want to propagate lies about the Creation Museum even though they know better.  For example, one atheist blogger (I won’t give the link to his blog because his language is so vile and crude) claims that I’m entirely “ignorant of actual history,” and yet he shows great ignorance of biblical history as it relates to Noah and Ham:

You see Ham was punished to be a servant to his brothers because . . . Ham was the one who tried to cover [Noah] up and give him some “decency”. So he was cursed to be an effective Slave. The descendants of Ham go to Africa. The entire notion that Africa is nothing but savages is born out of this culture (Bear in mind during the 2nd millenia BC was the rise of the Nubian Pharaohs of Egypt when Egypt picked a fight with Nubia and lost) and the western practice of ignoring African history was entrenched in this notion that nothing good can come from the “Descendants of Ham”. When black people were kept as slaves the argument put forward from Christians was precisely what Ken is flogging. That the descendants of Ham are divinely ordained to be slaves.

Another atheist blogger wrote that we push “racist propaganda”—like the “curse of Ham”—at the Creation Museum:

Despite all of this, which can be written off as pure stupidity and fodder for jokes, on a more serious side the museum pushes racist propaganda, by promoting the Curse of Ham.  Basically, the story is based on the mythical Noah placing a curse on Noah’s mythical grandson, Canaan, for some biblical insanity of some sort. . . . So, biblical scholars (how hard is it to study the Bronze Age Goatherder’s Book of Fairytales, Myths, and Hallucinations) have stated that Canaan was made black, and exiled to Africa.  Why is this racist?  Well, it was used for many years to justify slavery, and, more recently, why blacks are somehow inferior to white people. (www.skepticalraptor.com)

So . . . Noah cursed Ham’s son, Canaan, to be “a servant of servants”. According to the Creation Museum, Canaan and his descendants populated Africa. They were called [the nation of] Canaan, or Canaanites. Populated Africa . . . That’d make them black folks, huh? The argument that Noah cursed all of Canaan’s descendants has been used for centuries to justify the enslavement of black people. And Ken Ham of Answers in Genesis and the Creation Museum continues to promote this belief (www.secularnewsdaily.com).

Well, unfortunately for these and other terribly wrong bloggers, the idea that racism originated with the Bible is unfounded.

Some bloggers claim we blame racism on evolution—which is simply not true. It originated with sin.  On the contrary, it was evolutionary ideas that really fueled many racist attitudes over the past 150 years. For example, one famous evolutionist, Ernst Haeckel, once wrote, “At the lowest stage of human mental development are the Australians, some tribes of the Polynesians, and the Bushmen, Hottentots, and some of the Negro tribes" (from The History of Creation, pp. 362–363). Incredible. Haeckel placed dark-skinned peoples “at the lowest stage of human mental development”! One thing is clear—he didn’t get that belief from the Bible!

In fact, Charles Darwin himself had some very racist views, which he expressed in The Descent of Man:

At some future period, not very distant as measured by centuries, the civilized races of man will almost certainly exterminate and replace the savage races throughout the world.  At the same time the anthropomorphous apes. . . will no doubt be exterminated.  The break between man and his nearest allies will then be wider, for it will intervene between man in a more civilized state, as we may hope, even than the Caucasian, and some ape as low as a baboon, instead of as now between the negro or Australian [aborigine] and the gorilla. (p. 336)

You see, Darwin even believed that dark-skinned peoples were closer to gorillas than humans. That’s not certainly what the Bible teaches!

Even a decorated scientist and evolutionist James Watson, who co-discovered DNA,  commented that the intelligence of dark-skinned Africans is supposedly sub par, which caused a media frenzy about his racist evolutionary views. (Read the full article here: www.independent.co.uk.)

The creation account in Genesis tells us that man was made in God’s image. All of mankind ultimately descended from the original pair, Adam and Eve. The first couple would have had all the genetic material in them to have all the various skin tones and variations we see today. And when God judged the sinful world of Noah’s day with the global Flood, it was Noah’s family that repopulated the earth, who shared that genetic material. In other words, we are all one race, the human race, with variations and mixings that have occurred many times over.

Some of these atheist bloggers claim we are racist because we discuss that certain people in Africa are descended from Noah’s son Ham.  But they fail to explain that we teach that many different people groups descended from Ham, including the Chinese.

Below is a summary of the people groups that we teach descended from each of Noah’s sons—though keep in mind there has been considerable mixing (for the full chart, visit www.answersingenesis.org/assets/pdf/2013/chart-of-people-groups.pdf):

Shem: Jews, Arabs, Assyrians, many North Africans, Much of India, Indonesia, Armenia, Turkey, some to the Orient, Iran

I’m now to the stage of assuming that the reason the secularists continue to lie about what AiG and the Creation Museum teach is because it is a deliberate attempt to malign us.  And why?  Because they can’t use scientific facts to discredit us, so they misquote, misrepresent, and construct untruths so they can falsely accuse us—and name call—in their attempts to undermine our integrity.

Let’s stop  talking about the supposed curse of Ham. There was NO curse of Ham!  This false idea, together with the false belief that a supposed (non-existent) curse is connected to people with dark skin, have sadly been used by some people as a basis for racism and prejudice.  But we need to stand against such anti-biblical, false ideas that are used to cause harm!

Yes, I have to admit that I am quite frustrated by these false claims.  You see, we have a large section of our museum that is devoted to combating racism (and it offers a biblical solution), and yet some of our museum opponents—without a shred of evidence but with an intent to harm—say our displays promote racism! Incredible. It would be like claiming that certain exhibits in civil rights museums in the South promote racism towards dark-skinned people! Of course they don’t, and our museum doesn’t either.

In today’s News to Note column on our home page, Dr. Elizabeth Mitchell looks more at the false charge that biblical creationists teach the so-called (and non-existent) “curse of Ham.”

Previous Article An Eleven-year-old Who Gets It! Next Article Are You Coming?