Dogs are always sniffing around, but it’s not because they’re always hungry. Unlike us, they interpret the world primarily through smell.

The reason dogs are always sniffing is that they depend on a very keen sense of smell. In fact, the sense of smell is more important to a dog in interpreting its world than its sense of seeing or hearing.

The dog’s keen sense of smell is legendary. One drug-sniffing dog, a Labrador retriever named Meg, detected a plastic container of marijuana submerged in gasoline inside a gas tank. There are even disease-sniffing dogs that can smell certain types of cancer.

How do they locate smells so well? Dogs can detect which of their two nostrils is picking up the strongest odor. This “stereo” smelling allows dogs to be excellent trackers. A good tracking dog can cross a person’s trail an hour after that person has gone, and still tell which direction they went. Dogs do this by comparing the differences in the strength of the odor between that person’s earlier and later steps.

A lot of factors work together to give the dog its amazing sense of smell. First, dogs have a large nose, though even short-nosed dogs are vastly better smellers than humans. The design of the air pathway permits dogs to smell odors while both inhaling and exhaling, resulting in an almost continuous sense of smell.

As with humans and other mammals, the dog’s sense of smell is located in the olfactory region, a moist patch of cells in the roof of the nasal cavity. But while this region is about the size of a postage stamp in humans, it can be as large as a handkerchief in a dog. While the human olfactory region has about 6 million odor-sensing olfactory receptor cells, dogs have between 125 and 300 million, depending on the breed. Also, the proportion of the dog’s brain devoted to interpreting odors is 40 times bigger than it is in human brains.

What Exactly Is an Odor?

What are dogs smelling? Odors are chemical molecules dispersed in the air. A small part of each odor molecule, called the odorant, is responsible for the particular odor smelled. Each olfactory receptor cell in the dog’s nose comes specially equipped with a specific class of odorant receptor molecules that bind only to a specific class of odorants in a “lock and key” mechanism. For example, some cells detect buttery smells, while others detect fruity smells.

Mammals may have up to 1,000 genes that code for all these different odor reception molecules that bind to odorants. That’s quite a lot, considering that humans are believed to have only about 25,000 protein-coding genes for all bodily functions, and dogs have a total of only 19,000.

We Are the Fragrance of Christ

Scripture tells us that He who created the eye can see, and He who created the ear can hear (Psalm 94:9). And so the Creator of the nose can smell—but what does He smell? Praise God that the stench of our sins is replaced with the sweet aroma of Christ! “For we are to God the fragrance of Christ among those who are being saved” (2 Corinthians 2:15).

by Mike Matthews, editor in chief

Dogs are reputed to be the best sniffers in the world, but that prize is hard to quantify. Other animals have impressive stories, too. Male silkmoths can detect female perfumes 3 miles (5 km) away, but that’s just one odor. What about the number of cells in the nose devoted to smell? Bigger mammals like bears and horses have more (known as olfactory receptors). What about the number of genes devoted to smell? Dogs are impressive, but African elephants have twice the number of sniffer genes.

Does that make elephants the winner? The problem is that we don’t yet know what all these genes do, so we’re not sure it’s the best measure. Perhaps comparing sniffing stories is the best way to judge, after all. 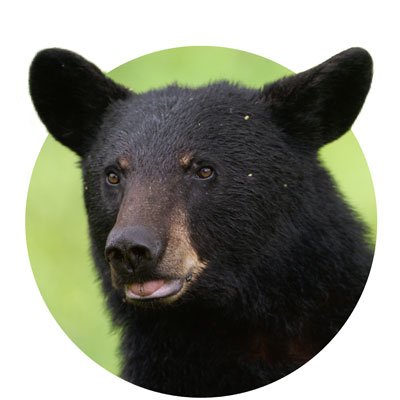 BLACK BEAR
The black bear has a large nose and space for more sensing cells (olfactory receptors) than any other land animal. While their brain is only a third the size of ours, it devotes five times more space to smell than ours does. These expert sniffers have been reported to run on a straight path to food 3 miles (5 km) away. Other bears are just as amazing. Polar bears can find seals 40 miles (65 km) away in the open, or detect pup seals under 3 feet (1 m) of snow. 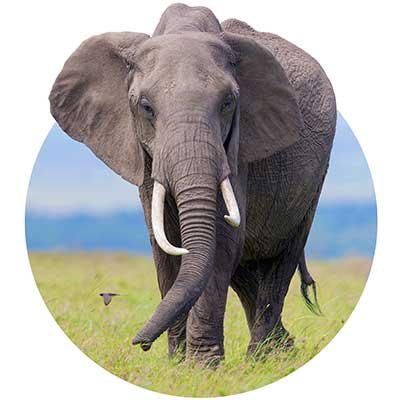 AFRICAN ELEPHANT
African elephants are famous for their big sniffer, so it’s not surprising that they belong on the top-ten list. They devote more genes to sniffing than any other known animal (1,948 genes have been identified, compared to 811 in dogs and 396 in humans). They are renowned for their ability to find underground water, which is a handy skill on the dry African plains. Reportedly they can smell water several miles away, and when necessary they will dig a waterhole for the herd to drink from. 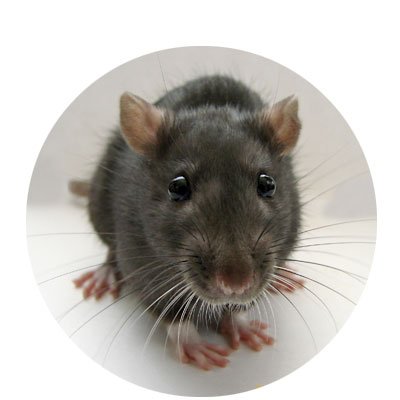 THE RAT
Rats are really good sniffers. Like dogs, they have the ability to smell in stereo. This allows them to isolate the direction of food smells. They have more sniffer genes than dogs (1,207 versus 811), which help them locate a wide variety of possible foods (or lurking cats). They can be trained like dogs to detect smells, such as land mines. In one test, a team of rats found all twenty mines in the test area. No wonder rats are so plentiful!

Dr. David Menton holds his PhD in cell biology from Brown University and is a well-respected author and teacher. He is professor emeritus at the Washington University School of Medicine in St. Louis. Dr. Menton has many published works and is one of the most popular speakers for Answers in Genesis–USA.