The Opossum—Survival of the Generalist

Rummaging in the trash heap, scrambling to avoid cars at night—the opossum is a common nuisance in America’s suburbs. Yet his pervasiveness is a testament to his unique design: to make do.

What creature has a kangaroo pouch, a monkey tail, and a rat’s snout yet lives—mostly unseen—in America’s backyards? A true American success story, the Virginia opossum has flourished in our cities, while urban sprawl has decimated most other wild animals. The key to its success is a few simple, God-given strategies for survival. Don’t be picky. Don’t be tasty or beautiful. When in danger, pretend you’re dead. Raise lots of young.

Many species that depend on one type of food or strongly prefer a certain habitat, like wetlands, face peril when the world around them changes. Not so with the opossum. He can get by just fine around humans or out in the woods, largely because he eats anything. If he comes across a carcass as he ambles along in his nightly search for food, he digs in. If he finds some grubs, it’s chow time. Even household garbage will satisfy his hunger. Alternatively, he can scurry right up a fruit tree, and holding on with his monkey-like tail, pluck fruit from the ends of the thin branches. Opossums have been known to devour crayfish, earthworms, eggs, frogs, birds, small mammals, snakes, pet food, and even roadkill.

The opossum chooses shelter with the same lack of bias. At the end of his nocturnal wandering, he’ll take cover just about anywhere convenient within his 50-acre home range. A burrow abandoned by a groundhog or squirrel is fine. A tiny opening under a porch or a crawl space under your house suits him just as well. He’s easy to please.

Undesirability Has Its Advantages

The opossum does not boast a place at the top of the food chain, but he’s not in constant fear of being eaten, either. Luckily for the species, he’s not a popular entrée on human menus, although some Southerners occasionally partake in ’possum and sweet potatoes. Introduced into western states during the Great Depression as a cheap food source, the opossum population quickly spread but never caught on as a staple. It did once earn a mention in Joy of Cooking. The experts suggested trapping the animal, if possible, feeding it “milk and cereals for 10 days before killing,” and serving the meat with turnip greens!

Some may find the opossum cute, despite its rat-like appearance, but no one would say it’s beautiful. Opossum fur lacks the soft beauty and warmth of mink or sable, so trapping is not a concern. Who says it’s bad to be unpopular? 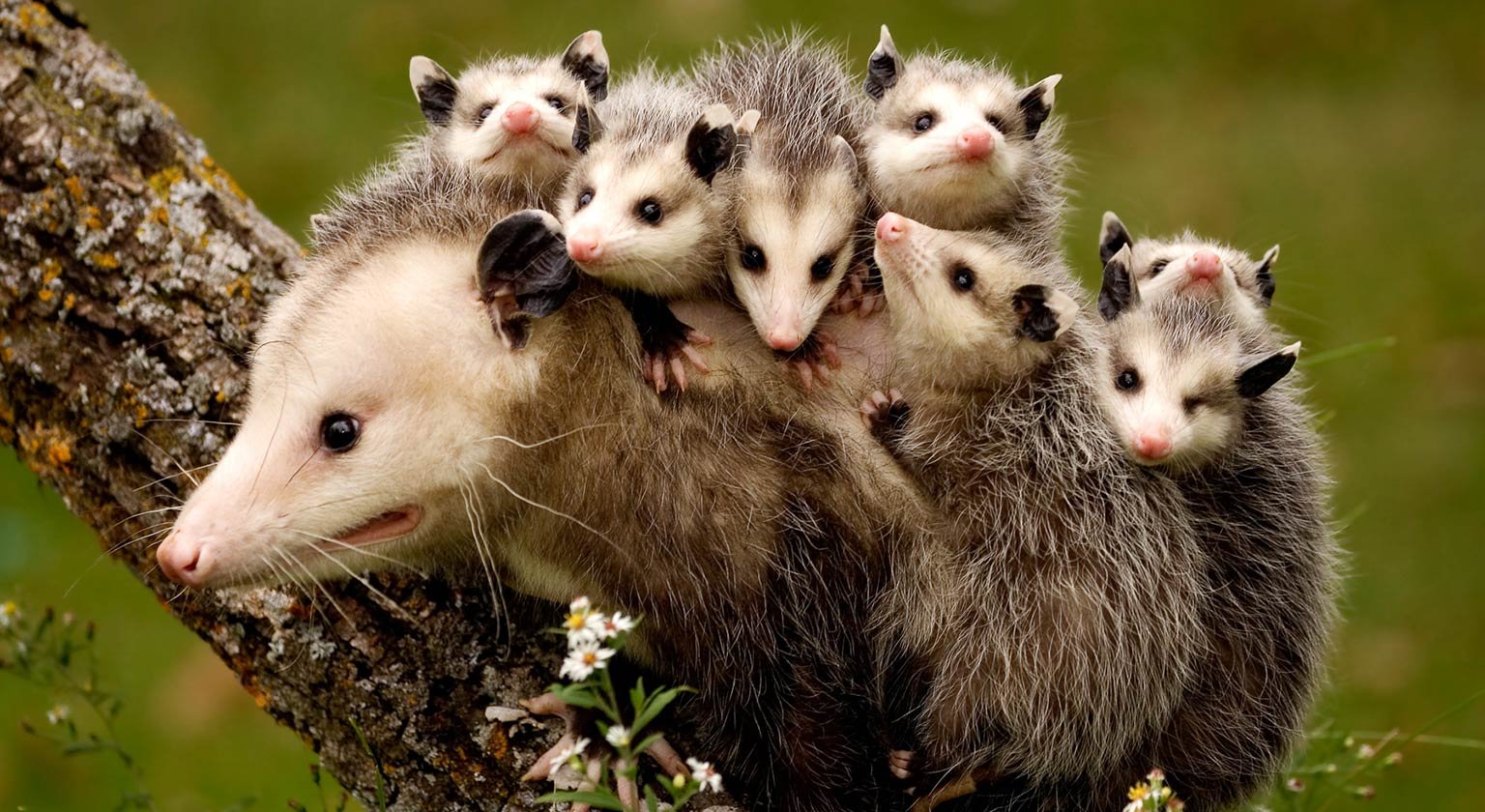 Many people know exactly one thing about opossums—they play dead. This claim to fame is well deserved. The opossum usually doesn’t need this trick because it can escape threats handily by scurrying into nearby brush or other cover. When the rightful owner of a valuable cache, such as a bowl of cat food, catches it in the act of helping itself, the opossum might take a stand, raising itself as high as it can on all fours, baring its teeth and hissing loudly.

However, when threatened by a dog or coyote, especially during the day, it will sometimes resort to its most famous defense. Dropping to the ground, it peels back its lips, foams at the mouth, hangs out its tongue, and lets the drool ooze out. It closes its eyes halfway and even emits a foul-smelling fluid. Its body will be stiff, and it will not even respond to being bitten or carried away. Some think that this is an involuntary response like fainting, but some evidence suggests that the brain may be alert while in this state, and as soon as the threat is gone, the opossum “wakes up” within minutes, even though it may stay “dead” for hours while in danger.

The opossum has another claim to fame—it is the only living marsupial in North America. Marsupial conjures up images of little joeys from the Land Down Under, but we often overlook the well-designed example in our own backyards. The opossum’s survival, when all other descendants of marsupials that spread from the Ark went extinct in North America, is a testament to its versatility.

The mother opossum gives birth after only about 12 to 14 days’ gestation. The undeveloped, honeybee-size babies are just strong enough to pull themselves up to the pouch, where as many as 13 latch on for nourishing milk. They remain attached for six or seven weeks as they grow. Eventually they release and climb out, alternately riding in the pouch or on their mother’s back for several more weeks before they are ready to strike out on their own. A mother will usually raise two litters per year.

Be a generalist and raise lots of young—it’s not flashy or exotic, but it’s the Creator’s design for this particular creature, and the opossum’s success shows how wise that design is.

Stephanie McDorman is Creation Museum registrar, overseeing the museum’s collections. She received her BS in biology from Milligan College in 1994. Stephanie and her husband Perry, the museum’s naturalist, are avid outdoor enthusiasts.

CLASS: Mammalia
ORDER: Didelphimorphia
FAMILY: Didelphidae
HABITAT: Didelphus virginiana, the Virginia opossum, is the only one of the more than 60 species of opossum that lives in the United States. All opossums, which make up the order Didelphimorphia, live in North and South America.

Stephanie McDorman is Creation Museum registrar, overseeing the museum’s collections. She received her BS in biology from Milligan College in 1994. Stephanie and her husband Perry, the museum’s naturalist, are avid outdoor enthusiasts.
Next Article The Indestructible Cockroach