The Not-So-Nutty Habits of Squirrels

The squirrel family (Sciuridae) is quite extensive, including species such as chipmunks, flying squirrels, and ground squirrels (among them woodchucks and prairie dogs). Squirrels live on almost every continent in the world and come in many sizes and colors. Red and gray squirrels are common in the United States. Some states have black squirrels, and Brevard, North Carolina, is famous for its white squirrels. Africa has the tiny two-inch pygmy squirrel; India has the giant squirrel, which is three feet long and weighs four pounds; and Kazakhstan has the nearly 20-pound gray marmot.1 It’s hard to go anywhere without running into a squirrel. In fact, throughout my life, I’ve encountered quite a few up close.

When I was a little girl, my dad rescued a flying squirrel and let me help nurse it back to health. In a fallen tree, my brother once found three squirrel kits (baby squirrels), which we took to a rescue sanctuary. And not long ago my dad found a baby squirrel, named him Earl, and raised him in his shirt pocket for weeks. One day, Earl leaped to the nearest branch and launched into the great beyond. 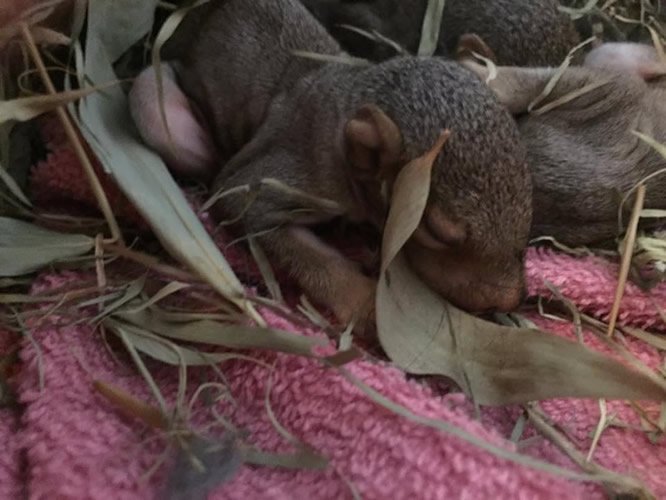 Given my history with squirrels, I’m happy that we have a day celebrating these little creatures on January 21, Squirrel Appreciation Day. However, far from appreciating them, most people consider these rascally rodents to be pests. They dash haphazardly in front of cars;2 they chew on wires, insulation, and even bones;3 and they loot bird feeders. But a closer look past their annoying habits reveals a creature designed by the Creator with some not-so-nutty—actually brilliant—behaviors.

Though squirrels can’t seem to make up their mind which side of the road they want to be on, God equipped squirrels with prudent forethought and clever resourcefulness.

Making Themselves at Home

Squirrels generally build their nests by chewing holes in trees (or sometimes your attic). But in case of emergencies, squirrels keep extra nests nearby. If threatened by a predator or other dangers in the environment, they pack up the kits and move to a second or third home.

Incidentally, their propensity for chewing cavities in trees benefits not only the squirrel but also other animals that move in after them. 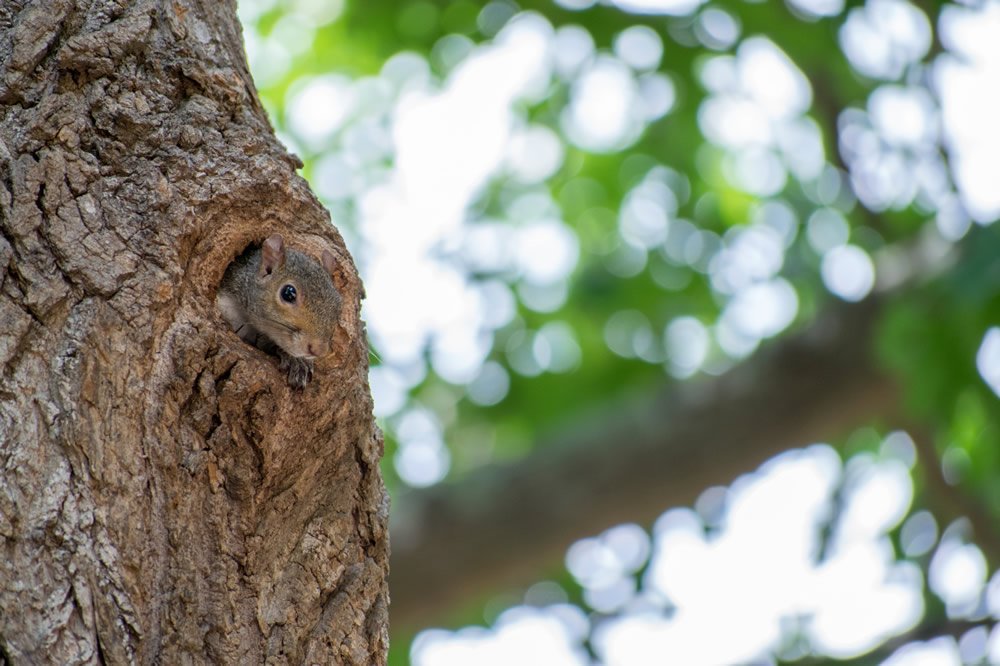 Photo by Rafael Pol on Unsplash.

Dinner and a Show

The squirrel is a master at scoring a free meal. No matter how complex the feeder hanging on a tree or mounted on a pole, a squirrel will find creative—and acrobatic—ways to help itself to the birdseed buffet you meant for your feathered friends. With headstands, jumps, and trapeze feats, it’s like a circus in your backyard.

However, whether they have access to your feeder or not, squirrels will find something to eat. When seeds or nuts are scarce, they munch on insects, fruits, vegetables, and even scraps of food such as cheese. Squirrels have even been observed making mushroom jerky by laying strips of mushroom to dry on branches.4

In areas with sugar maple trees, squirrels nibble through the bark, allowing the sap to drip out and dry. The squirrels return later to lick the sugar residue off the bark, enjoying a quick energy boost.5 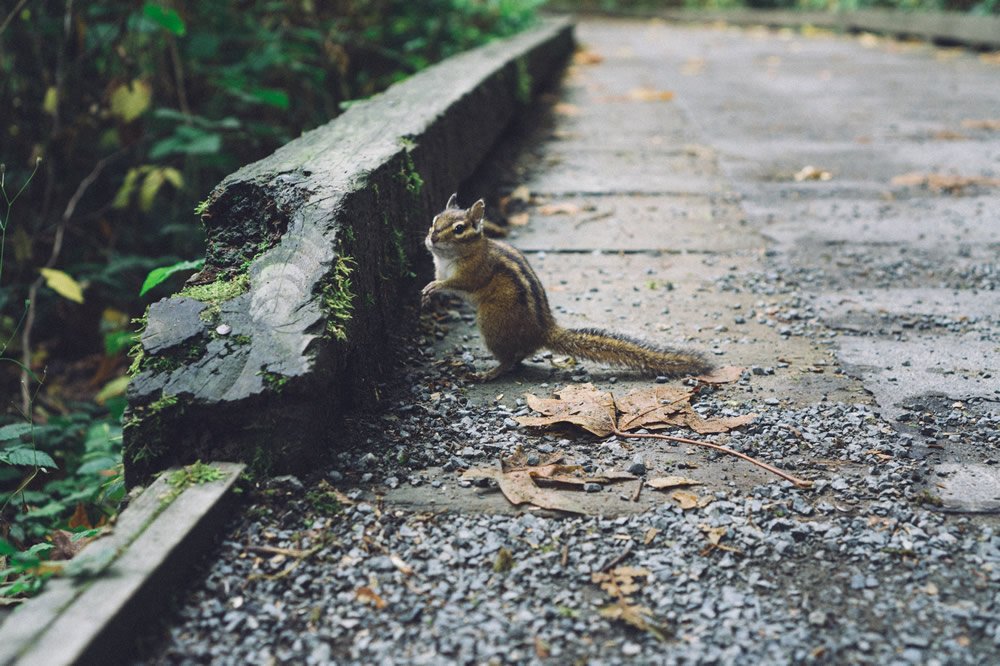 Photo by Evan McDougall on Unsplash.

It’s hard work gathering nuts to last the winter (3,000–10,000 by some estimates6), so squirrels don’t want other animals stealing their stash. To deter furry freeloaders, squirrels will sometimes pretend to bury nuts and seeds in case they are being watched. They will also bury nuts several times, to throw off potential thieves. The next time you spot a squirrel in your yard or at the park, see if you can catch it in a deceitful dig. This ability to purposefully deceive other animals is a trait of highly intelligent creatures such as primates.7

When I carry in my groceries from the store, I sort them by category so that I can easily remember where they go: vegetables in the fridge drawer, fruit on the counter, canned goods in the pantry, and ice cream in the freezer. Squirrels often do the same thing with their food by burying the same type of nuts or seeds in the same spots. This strategy, called chunking, helps them remember where they’ve hidden their food. 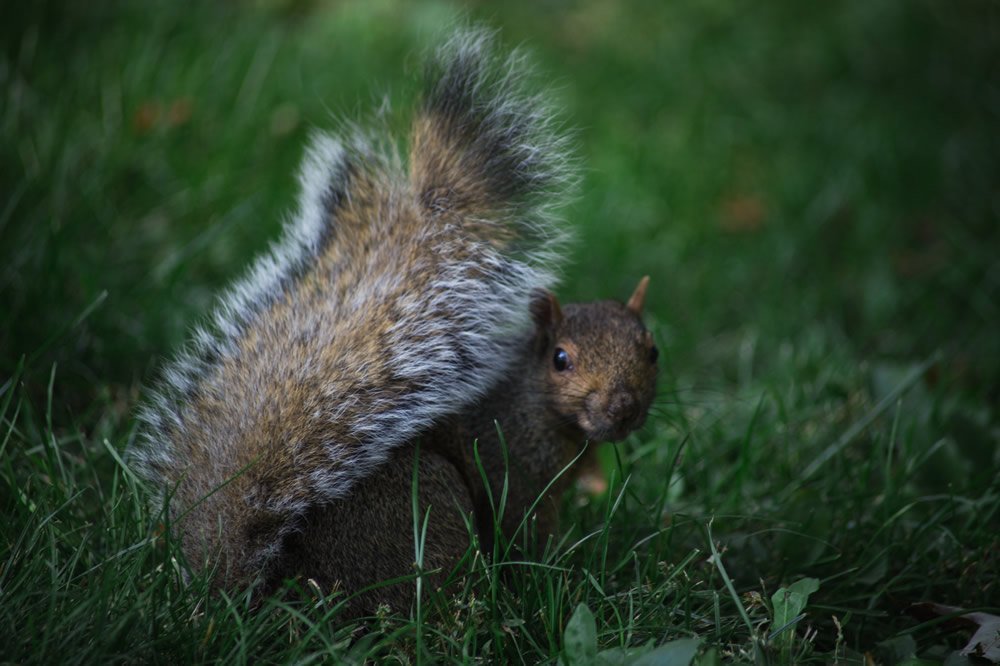 Photo by Jp Valery on Unsplash.

Squirrels are great problem solvers. In fact, researchers have found that squirrels can remember problem-solving techniques for a long time—up to two years.8

According to Dr. Pizza Ka Yee Chow, of Exeter's Centre for Research in Animal Behaviour, "This might be why grey squirrels can survive very well in towns and cities. For example, they're very good at getting food from bird feeders. People may try different types of bird feeders to keep the squirrels away, but this research shows grey squirrels can not only remember tricks for getting food but can apply those skills in new situations."9 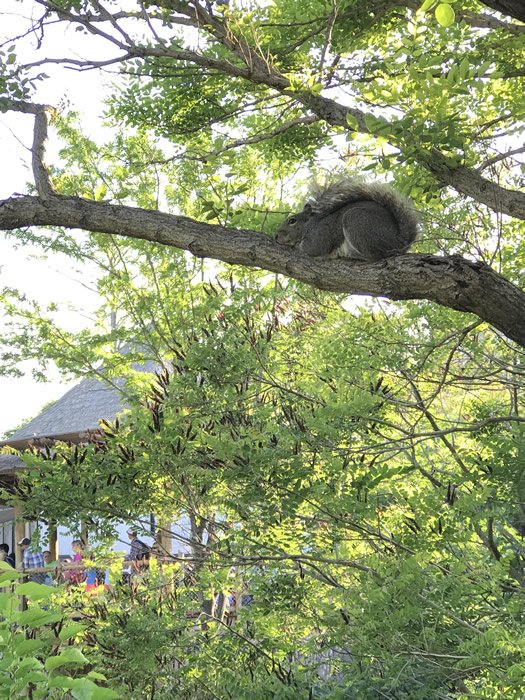 Squirrels often forget where they bury their seeds and nuts. In fact one study found that squirrels leave behind up to 74% of the acorns they bury.10 Though we might initially perceive this as absentminded wastefulness, squirrels inadvertently plant many trees. Acorns sprout best when out from under the shade of their parent tree. Squirrels know that there is a better chance of another animal finding their acorns when they stash them right under a tree, so they are more prone to bury acorns in more open areas. What better way for an acorn to travel to a sunny spot than by squirrel?

Michael Steele, a biology professor at Wilkes University in Pennsylvania, said, “In my mind, squirrels are a model organism for studying the close evolutionary interaction between plants and animals.”11 However, those who believe in a Creator know it’s not a stretch that this symbiotic relationship between squirrels and oak trees is by design.

Acorns are a squirrel’s favorite food because they’re abundant and easier to open than the other hard nuts they store for the winter. But acorns differ. Red oak acorns are dormant in winter and sprout in spring while white oak acorns sprout very soon after falling to the ground in the autumn.

Researchers found that 85% of white oak acorns were eaten by squirrels while 60% of red oak acorns were stored, most likely due to the delay in the red acorns sprouting (after all, the sprouted portion of the acorn is a lost meal for a squirrel). 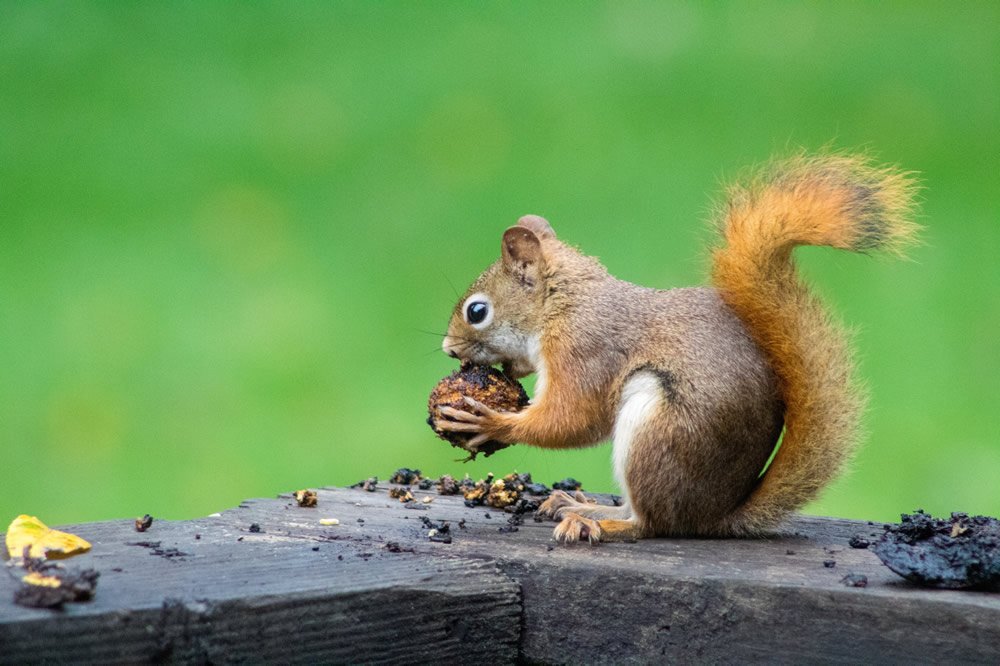 Photo by Caleb Martin on Unsplash.

Red acorns are loaded with fat, but also contain tannin, a bitter compound. This bitter taste might be another reason squirrels put off eating them until their leanest days. But when the squirrels finally eat the red acorns, researchers found that they remove the caps and bite the tops off before tossing them away. It seems that squirrels eat the acorn tips farthest from the embryo (where the most tannin is located), allowing the squirrel to avoid the bitter taste and giving even these half-eaten acorns a chance to germinate. It’s a winning situation for the squirrel, the tree—and ultimately us.

White oak acorns don’t have as much fat and tannins, which is perhaps why squirrels eat them immediately. However, a 1996 study showed that some squirrels, rather than simply chowing down on the white oak acorns immediately, bite through the embryo of the acorn, making the seed unable to sprout. Without the threat of a wasted meal, the squirrels then reburied the acorns for later dining.12

Squirrels aren’t quite as “squirrelly” as you might have thought. In fact, when you look closely, you’ll see that God gave this abundant species fascinating survival instincts and behaviors that benefit forests and us humans, even if indirectly. Maybe on this Squirrel Appreciation Day you’ll leave out a few nuts or seeds (walnuts, hickory nuts, and hazelnuts are their favorites), and remember to give thanks to the Creator who allows us to live among these bright-eyed, bushy-tailed critters.