In the age of Facebook and Twitter, it’s nice to be reminded that twenty-first-century humans weren’t the first to develop social networks. Meerkat clans were working together in southern Africa long before Mark Zuckerberg and Jack Dorsey came on the scene.

The sun rises, dispelling the night cold, as a few meerkats start crawling out of their desert burrow. It is so cold underground that they must spend several minutes warming their bellies before they start the day’s activities.

A Job for Everyone

Meerkats display a spectacularly complex society, typically seen only in insect colonies. Their complex behavior could come from only one source. On day six the Creator gave each kind of land animal unique tools to meet its needs (Genesis 1:24–25). The ancestors of meerkats did not need certain tasks before the Fall, such as hunting, but already had the basics for dividing tasks and developing new roles. Today, their social talents have blossomed in southern Africa.

Each morning the alpha female heads off first. With several pups to feed, it is imperative that she never go hungry. The alpha female rules each meerkat pack, or mob, which numbers from 20 to 50 members. She chooses her mate (the alpha male), and the two of them produce around 80% of the mob’s pups. All the other meerkats are subservient to the ruling alphas.

Sentinels (above) survey the landscape for danger. A wide variety of calls either assure the clan that all is well or warn them of danger.

The day’s sentinels head out next, looking for a good spot to watch for danger. All the other meerkats share the rest of the clan’s jobs. Each meerkat eventually spends time in each position, though they don’t seem to follow a schedule. The group always has at least one sentinel on duty to watch over the burrow system and the pups. Usually, a second sentinel keeps an eye on the rest of the gang when they go out looking for food. The sentry occasionally makes a pepping sound, meaning all’s well. But when a jackal or an eagle shows up, the bark changes immediately.

An amazing aspect of the meerkat calls is the range of meanings they convey. The warning for a terrestrial predator differs from the sound for an airborne one. The call can even indicate how deadly the threat is, ranging from “be careful” to “duck and cover!”

As the mob thins out, a few adults remain near the burrow with the pups. The pups are too young to forage and cannot be left alone. The babysitters not only keep the pups from wandering off but also protect the alphas’ children with their own lives. When a warning sounds, the babysitter will rush the pups back underground, ready to attack any threat foolish enough to follow. If they can’t reach the burrow in time, the babysitter will gather the pups and lie on top of them, shielding them.

Finally, adults start trickling back from the hunt. A few carry injured prey in their mouths as teaching tools. These meerkats are known as mentors. Each mentor will teach a pup the dos and don’ts of being a meerkat—how to spot and avoid predators and how to find and eat food. For example, meerkats often eat scorpions, a dangerous meal. To teach a young pup how, the mentor brings it a scorpion. Depending on the age of the pup, the scorpion will either be dead (for beginners), wounded, or alive but stingless (for advanced). The mentor watches how the pup interacts with the scorpion, prompting certain behavior as needed. Meerkats are among only a few animals on earth known to actively teach their young how to survive. In fact, when raised as pets, isolated from a meerkat group, they fail to teach their pups because no mentor was present as they grew up. The very act of teaching is learned from the mentors.

Who Organized These Desert Clans?

Meerkats’ social structure allows them to thrive in the harsh desert. If another group of meerkats attacks, everyone bands together to defend the home burrow. As the group grows, or should a cave-in occur, an excavation crew will repair and improve the burrow system. 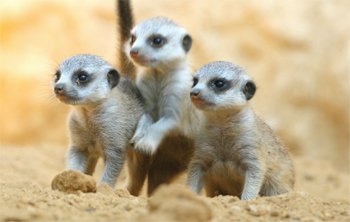 Meerkat pups learn the dos and don’ts of being a meerkat from adult meerkats. Meerkats are among only a few animals known to actively teach their young how to survive.

Impressive as each job is, their willingness to work together is even more amazing. The alpha pair does not assign jobs. Each meerkat simply fills the need as it arises without delay. Without this exemplary work ethic, the meerkat gang would never survive in the desert.

Evolutionary scientists claim that this complicated society evolved over long periods of time. But all the pieces must be in place at the same time for the meerkats to survive. Mentors without sentinels would be overcome by predators, while sentinels without mentors would not know survival skills to pass along to the next generation.

Creation scientists are still trying to work out the details. It appears that creatures were initially equipped with some instinctive behaviors, but their brains are wired to acquire new skills (which can be lost if not passed along).

The possibility of acquiring such complex social skills by trial and error is unfathomable, but it makes perfect sense if a loving God put everything into place all at once.

Heather Brinson Bruce earned dual degrees in English and chemistry from Clemson University. She writes for Answers magazine as a freelance author.