Despite its name and hopping gait, the kangaroo rat actually has more in common with a camel than with its much larger marsupial namesake.

The kangaroo rat is a rodent, but it is unlike any other rodent on Earth: it is able to survive in the desert with virtually no drinking water.1 The camel is the only other mammal that can match this feat, and yet the kangaroo rat looks nothing like the “ship of the desert”.

This humble creature lives in the desert regions of North America. They have a large head and eyes, short forelimbs and long hind limbs, and a body that ranges in length from 10 to 16 cm (4 to 6.5 in).2 They can jump up to 1.8 m (6 ft) in a single leap.

Like its marsupial namesake, the kangaroo rat balances on its hind legs and hops. But that’s where the similarity ends. Kangaroo rats live in burrows by day, foraging by night for seeds, leaves and other vegetation, and carrying food in their cheek pouches to store in their underground homes.3 They also occasionally eat insects. 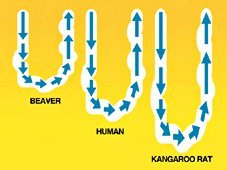 The Loop of Henle

The specialized kidney structure known as the Loop of Henle is much longer than in humans and most other creatures. This enables maximum concentration of urine and so minimizes water loss.

But how is it possible to live with virtually no drinking water? What makes the kangaroo rat different from other mammals, which would die within days in the desert without water? The answer lies mainly in the rat’s kidneys. Research has shown that the kangaroo rat produces the most concentrated urine of all mammals, and only passes a few drops per day.4

Humans drink a lot of water, and also gain moisture through food. As such, our urine is quite dilute. Kangaroo rats, on the other hand, take in very little water and so produce urine that is even more concentrated than that of the camel (which also concentrates its urine to survive without water).5 This means that the kangaroo rat loses little water in its urine.

Scientists have marvelled at how the kangaroo rat’s kidney works. The study of this organ—in particular the Loop of Henle, which enables the concentration process to take place—has led to a better understanding of how human kidneys work.6 The kangaroo rat’s Loop of Henle is much longer than that of other rodents. This suggests that the kangaroo rat’s amazing ability to survive in deserts may be an adaptation from an original created rodent kind.7

The kangaroo rat’s behaviour and habitat complement its physiological features. The rat’s nocturnal lifestyle helps keep its body temperature down, which minimizes water loss. During the day, the rodent keeps cool from the searing desert heat by remaining in underground burrows.8 The high humidity of the burrow also reduces the amount of water lost through breathing.

Moreover, kangaroo rats have a cooling system in their nasal passages that reduces moisture loss. The rats keep their nasal passages at a lower temperature than their core body temperature. Air exhaled from the lungs cools as it passes through the nose. This causes water vapour picked up from the lungs to condense on the inside of the nose, where it is reabsorbed back into the body.9 Air conditioners dry the air in a room in the same way.

The kangaroo rat’s body temperature normally exceeds that of its environment. This also reduces the need for evaporative cooling (sweating), because the animal can radiate heat. Kangaroo rats have sweat glands only in their feet.10

Kangaroo rats are amazing creatures with incredible features that enable them to survive in their desert habitat. They are certainly wonders of creation.