Quick, can you tell the difference between an African and an Asian elephant? Defining species isn’t a challenge just for ordinary folks; it creates a challenge for biologists.

When you think of the largest land animals on earth today, what comes to mind? Most people would probably say those creatures with long trunks and sharp ivory tusks. But do you mean the floppy-eared elephants of Africa or their small-eared cousins in Asia?

Identifying animals is much harder than you might think. Indeed, it touches on one of the most fundamental questions of biology. This difficulty actually has a name: “the species problem.”

Ever since species appeared on the cover of Origin of Species back in 1859, this word has taken center stage in public debate. Its meaning still eludes science. The early philosopher Plato first took a crack at defining species, and his thoughts still impact science today. He saw species as a universal, unchanging “type.” It wasn’t something we see, but a fixed ideal beyond this world. So if we use the word dog to describe our pet, we’re not actually describing Fido but some fixed idea of “dog.”

Plato’s followers, such as Carl Linnaeus, later adopted this idealistic concept. (Linnaeus created the two-part naming system of genus and species, such as Canis lupus for dogs. As a Christian, he believed this system could identify the original unchanging “types” in God’s mind at creation. He later backed off this idea of unchanging species, but others pushed it passionately.)

Darwin reacted strongly against the concept of species fixity and their supernatural origin. During his five-year voyage around the world, he observed that similar creatures lived near each other but differed slightly. How does this change take place? He proposed a mechanism for change, called natural selection. Darwin believed this made anything possible, but he couldn’t prove it.

His view heightened another problem in biology. Determining a species was already difficult. If it always changes and no absolute standard exists, what is a species?

The discovery of genetics helped explain the process of change, but it did not solve the definition of species. In 1942 the brilliant evolutionist Ernst Mayr argued for a new definition. He proposed a “biological species concept,” not based on physical traits but whether animals can breed. If animals can produce offspring, they presumably belong to the same species. By a simple change in definition, physical traits no longer determined species.

Mayr hoped his new definition would unify scientists around his evolutionary concept of changing species. In the end, however, his definition proved to have limited usefulness. How do you go about checking which animals can interbreed, especially if they live on different continents or don’t want to mate? What about fossils or asexual organisms? Despite Mayr’s efforts, biologists still struggle to distinguish species.

The Creation View of “Kinds”

While species is a useful term in modern science, it is not a biblical term. The Bible uses another word. According to Genesis 1, the Creator designed creatures with stable forms, called kinds, which Adam could simply look at and name. Even if he’d never seen them before, he could examine their distinct traits and give them appropriate names.

We still do this today—beginning in childhood. What parents haven't chuckled at their two-year-old, who just learned animal sounds, and then says “meow” the first time he sees a lion?

Biblical “kinds” can include many species. It’s based on physical similarities that even a child, for the most part, can see. And we naturally expect species within the same kind to be able to produce offspring. Determining species, in contrast, can be quite challenging. Consider elephants as an illustration. Most people have probably heard of two species: the African and Asian elephants. But if we’re honest, we have a hard time remembering the difference.

Biologists struggle, too, but for other reasons. They can see subtle differences instantly, but the problem is the multiplicity of differences. Which differences make them separate species?

Every member of the elephant “kind” has the same basic features—a long trunk, tusks, and floppy ears. But there are some differences. Are they enough to make separate species? 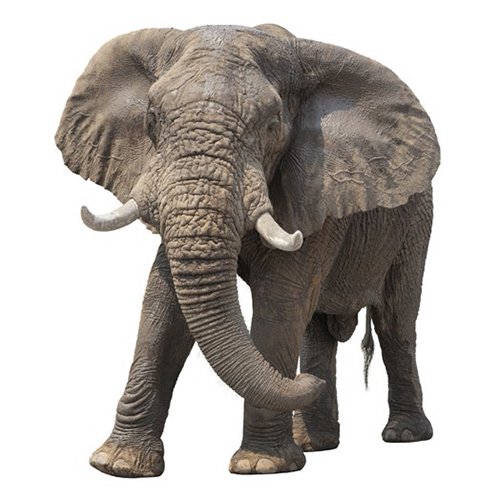 African Bush Elephant
(Loxodonta africana)
This is the largest land animal on the earth today. It mainly eats grasses on the African plains. The trunk has two grasping “fingers” at the end. The front feet have four toenails and the rear have three. 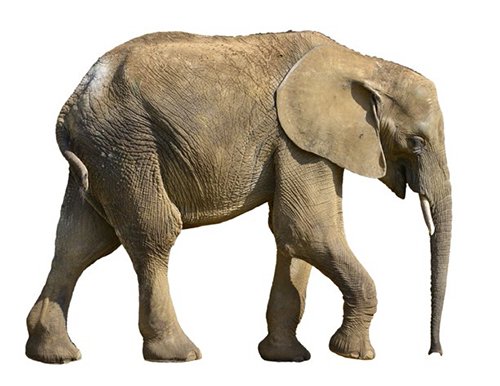 African Forest Elephant
(Loxodonta cyclotis)
This elephant feeds on leaves, bark, and fruit in the forests of the African Congo. It is darker and smaller than bush elephants. Its ears are rounder and smaller. The tusks are harder and straighter. The front feet normally have five toenails and the rear have four. 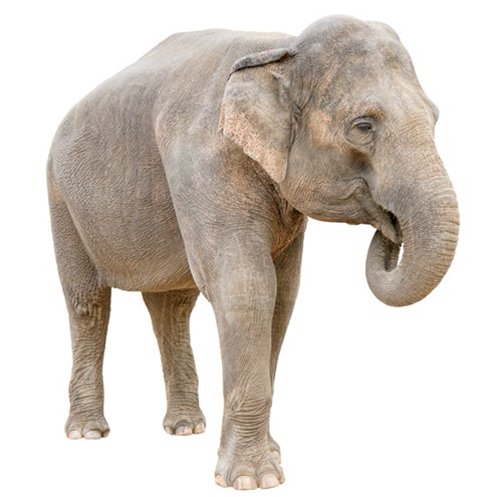 Only Trunk of Its Kind

Everyone agrees that the amazing trunk (technically called a proboscis) is distinctively “elephant.” No other creature has something like it. What a marvel it is! Elephant trunks are an extension of their upper lips; but unlike our lips, they have around 40,000 to 60,000 muscles and tendons that give them amazing control. The elephant lip is so flexible and sensitive that it can pick up objects as small as a feather.

Because this feature is so distinctive, it is the defining characteristic of all members of the order Proboscidea, including extinct mammoths and mastodons. Most creationists consider all these species to belong to one Genesis kind because of their similarity.

There are differences, however. The African elephant has two grasping “fingers” at the end of its trunk, but the Asian elephant has only one. Yet both designs are effective. They indicate variety without changing God’s basic design for the kind.

The African bush elephant (Loxodonta africana) is the largest living land animal on earth. But is it one species or two? We associate bush elephants with the majestic herds munching grass on the parklike plains of East Africa, but a variety, called the African forest elephant (Loxodonta cyclotis), lives in the forests of the Congo Basin. There it feeds on leaves, bark, and fruit. Are they the same species?

Until 2010 most biologists considered them so. But genetic studies showed consistent differences. So many scientists now consider them separate species. But is it arbitrary?

There are physical differences. Forest elephants are dark and smaller. Their ears are rounder and smaller. The tusks are harder and straighter—male tusks nearly reaching the ground. The tusks shove through the thick undergrowth of their forest habitat, unlike those of their grassland cousins.

But are these differences significant enough that they should be considered separate species?

Africa has other varieties as well, such as the desert elephants. They tend to have broader feet, longer legs, and smaller bodies than the bush elephants. But they are not classified as distinct species. No wonder people get confused!

Most scientists say all Asian elephants are the same species but divided into four subspecies. One lives on the mainland of Asia, and the others on the islands of Sri Lanka, Sumatra, and Borneo. The island elephants, called pygmy elephants, are smaller than their continental cousins. The Borneo pygmy is the smallest, with females only 4–7 feet (1.5–2 m) tall. But is size really a determiner of species? (Nobody says that about human pygmies!) 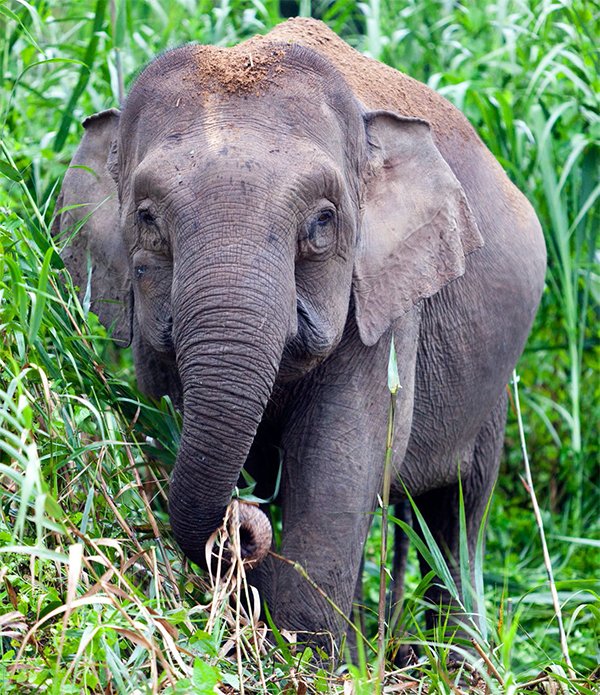 The smallest living elephant is the Borneo pygmy. Females are only 4–7 feet tall. But despite the significant size difference, it is not a separate species. This endangered elephant is a subspecies of the Asian elephant.

It’s interesting to learn the differences among living members of the elephant kind. They show us the great variability God placed within the original kinds. Whether we call them a species, subspecies, or variety, they belong to the same original kind. As we come to appreciate this wonderful diversity, we need to glorify its Creator, Jesus Christ. He made this family of magnificent creatures on Day Six of Creation Week to glorify Him and for His pleasure.

Buddy Davis is a favorite AiG speaker, especially for children. He travels extensively conducting workshops teaching children how to defend their faith. He is not only a renowned musician and “paleo-artist” but also an adventurer, having taken expeditions to Alaska and Turkey.
Mike Matthews earned a BA in English and an MEd in English education from Bob Jones University. Mike was content manager for the Creation Museum and now is the editor in chief of Answers magazine.
Previous Article Creation on Display Next Article Salt Removal on Demand