Intercultural Communication Lesson Demonstrates What Not to Do

Florida Atlantic University issues apology for instructing students to stomp on the name of Jesus.

In the wake of an outpour of public sentiment, legal intervention from the Liberty Institute,1 and a stern rebuke from Florida governor Rick Scott, Florida Atlantic University has now issued an apology for instructing students to stomp on the name of Jesus. Supposedly aimed at illustrating principles of intercultural communication, the ill-conceived classroom activity was a better example of how to be offensive and shut down communication. Such exercises desensitize students to attacks on religious people and encourage an arrogant attitude of intolerance toward people of faith.

“I am deeply disappointed in the recent action of Florida Atlantic University faculty that raises significant questions over students rights and the lessons being taught in our classrooms,” Governor Scott wrote in a letter to the chancellor of Florida’s university system. “As we enter the week memorializing the events of Christ’s passion, this incident gave me great concern over the lessons we are teaching our students. The professor’s lesson was offensive, and even intolerant, to Christians and those of all faiths who deserve to be respected as Americans entitled to religious freedom.”2

The incident began about three weeks ago in a Florida Atlantic University class on intercultural communication. Professor Deandre Poole instructed the students, as suggested in the textbook Intercultural Communication: A Contextual Approach, 5th Edition, to “… write the name JESUS in big letters on a piece of paper. Ask the students to stand up and put the paper on the floor in front of them with the name facing up. Ask the students to think about it for a moment. After a brief period of silence instruct them to step on the paper. Most will hesitate. Ask why they can’t step on the paper. Discuss the importance of symbols in culture.”

After filing a complaint with university administrators, Rotela became the target.

One student, Rick Rotela, refused and told the professor he planned to report the offensive assignment. After filing a complaint with university administrators, Rotela became the target. Pending a hearing for “alleged violation of the student code of conduct, acts of verbal, written or physical abuse, threats, intimidation, harassment, coercion or other conduct which threaten the health, safety or welfare of any person,” he was told in a letter from Associate Dean Rozalia Williams, “… you may not attend class or contact any of the students involved in this matter – verbally or electronically – or by any other means. Please be advised that a Student Affairs hold may be placed on your records until final disposition of the complaint.”3 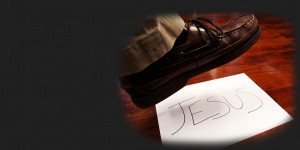 What’s in a name? Christians do not worship a piece of paper or a symbol, but the Lord’s name is important because the respect we show to His name is a pattern of the reverence we show to Him, our living Savior, the Son of God. Thus, God commands us not to blaspheme, not because we will somehow injure Him but because we injure our own relationship with Him and demean Him before others. Scripture tells us that Jesus once hung dead on a Cross, crucified for our sins. Having paid the price for the sins of mankind (Hebrews 2:9), He then rose from the dead. “Therefore God also has highly exalted Him and given Him the name which is above every name, that at the name of Jesus every knee should bow, of those in heaven, and of those on earth, and of those under the earth, and that every tongue should confess that Jesus Christ is Lord, to the glory of God the Father” (Philippians 2:9–11).4

“Decades ago, the Supreme Court ruled that students do not leave their First Amendment rights at the school house gate: That is still true today,” says Hiram Sasser, director of litigation at Liberty Institute.5 Plans for the disciplinary hearing have now been dropped, Rotela has been reinstated and provided with an alternate class, and the university has apologized to the student and the community. Dr. Charles Brown, senior vice president for Student Affairs, says the activity was insensitive and that the university underestimated the hurt it would cause. Dr. Brown says the university embraces academic freedom and failed in its responsibility by using this activity in its classes. (You may view Dr. Brown’s statement at http://www.bizpacreview.com/2013/03/26/media-storm-causes-fau-to-release-video-apology-for-jesus-stomping-57964.)

Commenting on the incident, Sasser observes, “The textbook reveals the agenda. So-called intellectual enlightenment is stomping on everything that has held western civilization together for the past 2,000 years.”6

This assignment draws to mind a scene from C.S. Lewis’s book That Hideous Strength, the third novel in his famous space trilogy. In the scene, non-Christian sociologist Mark Studdock is being groomed for his expanding role in an organization bent on advancing evil, humanistic goals for mankind under the guise of science. To desensitize Studdock to Christian mores—“a dominant system in the subconscious of many individuals”—7he is commanded to abuse a large wooden crucifix on the floor. Though Studdock considers Christianity to be superstition, he resists. Though he “did not regard the image with anything at all like a religious feeling,”8 Studdock realized that to abuse the symbol would be a “step over a precipice.”9 He realized that being so desensitized to respect for the symbol of the Christian faith, in which are rooted the moral foundations of society, was somehow dangerous for him personally.

Similarly, such exercises as this “stomping on Jesus” exercise, while they clearly illustrate the powerful cultural significance of the Lord’s name, do not facilitate intercultural communication.

Similarly, such exercises as this “stomping on Jesus” exercise, while they clearly illustrate the powerful cultural significance of the Lord’s name, do not facilitate intercultural communication. No one communicates better with others by learning to disrespect their beliefs. Furthermore, encouraging students to try a little blasphemy—just to see how it feels—is not an appropriate classroom activity. Sasser comments that this episode is “a testimony to the indoctrination that some of the public schools and universities are engaging in—to demonize anything that was valuable in the culture.”10

As an aside, early in my medical training, I was encouraged by a superior to “do one abortion, just to see how it makes you feel.” And though she merely wanted to “free” me from what she regarded as inconvenient and unfounded moral concerns so I could earn extra money at the local abortion clinic—the result would have been to desensitize me to the sanctity of human life. Her Christian colleague quietly countered that I should “just try a little murder to see how it feels,” ending the discussion.

Biblical values are under attack in our society. Educational institutions do not help students become intellectually and spiritually stronger by demeaning their faith. The public outcry against this offensive exercise is encouraging. Yet we see an insidious, socially acceptable assault on faith in the name of science, unfortunately, when students espousing a biblical understanding of origins are systematically and intentionally pushed toward a “crisis of faith.” At many colleges and universities, students are either intimidated by atheists or more subtly taught that they should not trust the Word of God, often by professors pushing a theistic evolutionary point of view as Dennis Venema does at Canada’s Trinity Western University.11

Sasser comments, “It just takes one person to stand up against this type of aggressive nonsense. It also takes like-minded people standing together to say we are not going to tolerate this type of religious bigotry. When we all stand together—we win.” Likewise, those of us who espouse a biblical understanding of our origins realize that God’s Word is not incompatible with the actual findings of science, but only with worldview-based evolutionary interpretations. We must be vigilant to deal with the misinformation and intimidation inflicted on students as they leave home. We need to equip our students with clear answers from God’s Word and a discerning mind so that their faith will be able to stand the onslaughts to come.