Who Is Jesus and What Did He Believe About Creation?

At a crucial point in his ministry Jesus asked his disciples “who do you say that I am?” (Matthew 16:15). The answer to this question is more important than anything else (John 3:36; 1 John 5:12). Nevertheless, today, just as in Jesus’ day, when Christians ask people the question “who do you say Jesus is?,” there are various answers given concerning his identity. For example, many people in Western society see Jesus as nothing more than a good teacher, whereas skeptical Bible critics believe he was only “ . . . a lower-class Jewish preacher from the backwaters of rural Galilee . . . ”1 For Muslims, Jesus was merely a prophet while in Judaism He is considered to be a false prophet. On the other hand, cults like the Jehovah’s Witnesses, Mormons, and Christodelphians, who “claim” the Bible as their authority, teach that Jesus is a created being.

The question we must consider, however, is what does the Bible say about the identity of Jesus?

For born-again Christians, Jesus is more than a good teacher, a prophet or even a created being. He is in actual fact the Creator of all things, who existed before the creation of the world (John 17:5). Genesis 1:1 tells us that “In the beginning God created the heavens and the earth.” In John 1:1 we read the same words, “In the beginning . . .”2 John informs us in John 1:1 that in the beginning was the Word (logos) and that the Word was not only with God but was God. This Word is the one who brought all things into being at creation (John 1:3). Several verses later, John writes that the Word who was with God in the beginning “became flesh and dwelt among us” (John 1:14). Notice that John does not say that the Word stopped being God. In fact, John uses a very particular term here, skenoo, “dwelt,” which means he “pitched his tent” or tabernacle” among us. This is a direct parallel to the Old Testament record of when God “dwelt” in the tabernacle that Moses told the Israelites to construct (Exodus 25:8–9, 33:7). John is telling us that God “dwelt” or “pitched his tent” in the physical body of Jesus.

In the incarnation, it is important to understand that Jesus’ human nature did not replace His divine nature. Rather, His divine nature dwelt in a human body. This is affirmed by Paul in Colossians 1:15–20, especially in verse 19: “For it pleased the Father that in Him all the fullness should dwell.” Jesus was fully God and fully man in one person.

The New Testament not only explicitly states that Jesus was fully God, it also recounts events that demonstrate Jesus’ divine nature. For example, while Jesus was on earth, He healed the sick (Matthew 8–9) and forgave sins (Mark 2:9). What is more, He accepted worship from people (Matthew 2:2, 14:33, 28:9). One of the greatest examples of this comes from the lips of Thomas when he exclaims in worship before Jesus, “My Lord and my God!” (John 20:28). The confession of deity here is unmistakable, as worship is only meant to be given to God (Revelation 22:9); yet Jesus never rebuked Thomas, or others, for this. He also did many miraculous signs (John 2, 6, 11) and had the prerogative to judge people (John 5:27) because He is the Creator of the world (John 1:1–3; 1 Corinthians 8:6; Ephesians 3:9; Colossians 1:16; Hebrews 1:2; Revelation 4:11).

Furthermore, the reactions of those around Jesus demonstrated that He viewed Himself as divine and truly claimed to be divine. In John 8:58, Jesus said to the Jewish religious leaders, “Most assuredly, I say to you, before Abraham was, I am.” This “I am” statement was Jesus’ clearest example of His proclamation “I am Yahweh,” from its background in the book of (Isaiah 41:4, 43:10–13, 43:25, 48:12—see also Exodus 3:14). This divine self-disclosure of Jesus’ explicit identification of Himself with Yahweh of the Old Testament is what led the Jewish leaders to pick up stones to throw at Him. They understood what Jesus was saying, and that is why they wanted to stone Him for blasphemy. A similar incident takes place in John 10:31. The leaders again wanted to stone Jesus after He said, “I and the Father are one,” because they knew He was making Himself equal with God. Equality indicates His deity, for who can be equal to God? Isaiah 46:9 says, “Remember the former things of old, for I am God, and there is no other; I am God, and there is none like Me.” If there is no one like God and yet Jesus is equal to God (Philippians 2:6), what does this say of Him, except that He must be God? The only thing that is equal to God is God.

The reason it is important to get the identity of Jesus right is summed by our Lord Himself, when He told the people of His day, “I said to you that you will die in your sins; for if you do not believe that I am He, you will die in your sins.” (John 8:24). As we have seen, the Jewish people understood that when Jesus identified Himself as I am, they knew who He was making Himself out to be; namely Yahweh, the one who created everything (see Isaiah 44:24, 45:18, 48:12–13).

As Christians we rightly proclaim Jesus as our savior and redeemer; however, we must not forget that the New Testament emphasizes that He is also our Creator (John 1:1–3; Colossians 1:16; Hebrews 1:2; Revelation 4:11).

Furthermore, the reason we need a savior is because we are in rebellion against our Creator. Since Jesus is our Creator, it is essential to know how He viewed the early chapters of Genesis.

Firstly, it is important to note that Jesus had the highest view of Scripture. Jesus clearly believed that Scripture was God’s Word and therefore truth (John 17:17), and that it could not “be broken” (John 10:35). His own view of the Scripture was that of verbal inspiration (Matthew 5:18). For Jesus, Scripture is not merely inspired in its general ideas or its broad claims or in its general meaning, but is inspired down to its very words.

Jesus regarded the Old Testament’s historicity as impeccable, accurate, and reliable. He often chose for illustrations in His teaching the very persons and events that are the least acceptable today to critical scholars. This can be seen from his reference to Adam (Matthew 19:4–5), Abel (Matthew 23:35), Noah (Matthew 24:37–39), Abraham (John 8:39–41, 56–58), Lot and Sodom and Gomorrah (Luke 17:28–32). If Sodom and Gomorrah were fictional accounts, then how could they serve as a warning for future judgement? This also applies to Jesus’s understanding of Jonah (Matthew 12:39–41). Jesus did not see Jonah as a myth or legend; the meaning of the passage would lose its force, if it were. How could Jesus’ death and resurrection serve as a sign, if the events of Jonah did not take place? Furthermore, Jesus says that the men of Nineveh will stand at the last judgment because they repented at the preaching of Jonah, but if the account of Jonah is a myth or symbolic, then how can the men of Nineveh stand at the last judgment?

Moreover, there are multiple passages in the New Testament where Jesus quotes from the early chapters of Genesis in a straightforward, historical manner. Matthew 19:4–6 is especially significant as Jesus quotes from both Genesis 1:27 and Genesis 2:24. Jesus’ use of Scripture here is authoritative in settling a dispute over the question of divorce, as it is grounded in the creation of the first marriage and the purpose thereof (Malachi 2:14–15). The passage is also striking in understanding Jesus’ use of Scripture as He attributes the words spoken as coming from the Creator (Matthew 19:4). More importantly, there is no indication in the passage that He understood it figuratively or as an allegory. If Christ were mistaken about the account of creation and its importance to marriage, then why should He be trusted when it comes to other aspects of His teaching? Furthermore, in a parallel passage in Mark 10:6 Jesus said, “But from the beginning of creation, God ‘made them male and female.’” In the statement “from the beginning of creation”3 Jesus was saying that Adam and Eve were there at the beginning of creation, on Day Six, not billions of years after the beginning. 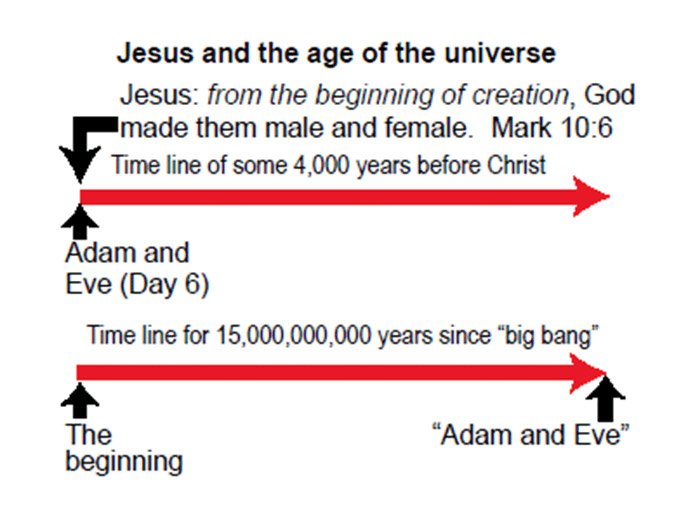 Jesus not only mentions Adam at the beginning of creation but his son Abel as well (Luke 11:49–51). In that passage Jesus talked about “the blood of all the prophets, shed from the foundation of the world,” the foundation being the initial Creation Week (see Hebrews 4:3).4 Yet, would “ . . . this be true if millions of years of human evolution preceded Adam and Eve? Were there really no murders before Adam’s time?”5

Jesus believed, like Adam, that Abel existed at the foundation of the world. From Jesus’ understanding of Genesis 1–2 it is clear that He believed in the account of creation and therefore the supernatural creation of Adam as the first man, and He leaves no room for the evolutionary timeline of the origin of man. Jesus clearly understood that Abel lived at the foundation of the world. This means that as the parents of Abel, Adam and Eve must also have been historical.

Jesus also spoke of the devil as being a murderer “from the beginning” (John 8:44). It is clear that Jesus accepted the book of Genesis as historical and reliable. Jesus also made a strong connection between Moses’ teaching and his own (John 5:45–47), and Moses made some very astounding claims about six-day creation in the Ten Commandments, which he says were penned by God’s own hand (Exodus 20:9–11, 31:17–18).

The Apostle Paul exhorts us that we are to have “the mind” (1 Corinthians 2:16) and “attitude” of Christ (Philippians 2:5). Therefore, as Christians, whatever Jesus’ belief was concerning creation and the Flood should be what we believe.

People say they do not accept the Bible’s account of origins in Genesis when it speaks of God creating supernaturally in six consecutive days and destroying the world in a global catastrophic flood. This cannot be said, however, without overlooking the clear teaching of our Creator, the Lord Jesus, on the matter (Mark 10:6; cf. Matthew 24:37–39) and the clear testimony of Scripture (Genesis 1:1–2, 3:6–9; Exodus 20:11; 2 Peter 3:3–6), which He affirmed as truth (Matthew 5:17–18; John 10:25, 17:17). If we confess Jesus is our Lord, we must be willing to submit to Him as the teacher of the church.