Earlier this week, headlines announced a new discovery that shows Jesus was married. Is there any basis for such a claim? Would it even matter if Jesus was married? Tim Chaffey, AiG–US, responds.

Was Jesus married? Earlier this week, headlines announced that a new discovery shows Jesus was married, and we have received inquiries regarding this subject. These bold claims are based on the discovery of a papyrus fragment written in an ancient Egyptian language known as Coptic.1 Is there any basis for such a claim, and would it even matter if Jesus was married? [Update: An article appearing in the July/August 2016 issue of The Atlantic meticulously detailed the fraudulent nature of this fragment.]2 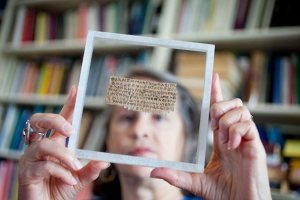 Dr. Karen King holds the fragment, showing its small size. Without more of the context from the original document, it is highly unlikely that one can properly understand the initial message. Image by Rose Lincoln/Harvard Staff Photographer, via Harvard Gazette.

Dr. Karen L. King, a historian from Harvard Divinity School and member of the Jesus Seminar,3 recently had the opportunity to examine the smaller-than-business-card-sized fragment when an unnamed private collector asked her to study it to determine its authenticity. At this point, very little is known about the collector and the provenance of the artifact, other than the claim that the owner acquired the piece from a German owner in 1997.

In a draft of her upcoming paper on the subject in the Harvard Theological Review, King, for the purposes of reference, calls the fragment The Gospel of Jesus’s Wife, but what does the fragment state that would merit such a title? According to King, the mere eight partial lines of text from the front of the piece are translated as (brackets indicate where the text cuts off): 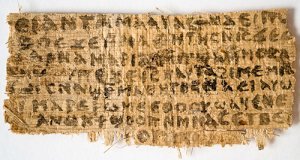 Close up shot of the 4 cm x 8 cm fragment. Eight lines of text are visible on the front (pictured), while only a few words can be translated from the back side (not pictured). Photo from and copyrighted by Karen L. King, via Harvard Gazette.

The text on the back of the fragment was translated as:

Without the surrounding context or any other copies of this document, it is practically impossible to determine what this writing is really about. Of course, the fourth line of the front side is what triggered the headlines. According to this Coptic fragment, Jesus was apparently telling His disciples something about His wife.

Does This Fragment Prove Jesus Was Married?

For the sake of argument, let’s assume this text should be understood in a straightforward manner and that Jesus was not using the term wife metaphorically (e.g., God described Israel as His unfaithful wife in Ezekiel 16). If true, should we start believing that Jesus was married? Not at all! King believes the papyrus is likely from the fourth century AD—three centuries after Jesus died and rose—although she also thinks the ideas date to the second century due to similarities between the fragment and the Gnostic work known as the Gospel of Thomas. Even as a scholar known for her favorable treatment of various non-canonical texts, King advised that this does not prove in any way that Jesus was married, only that some early groups had a tradition that Jesus was married.4

Despite her admonition on this point, King added, “The earliest and most historically reliable Christian literature is utterly silent on the issue, making the question impossible to answer one way or the other.”5 In one sense, King is right because the Bible does not specifically say, “Jesus was not married.” However, there are numerous reasons to conclude that He was not married.

Was Jesus Married? - The Ancient Evidence

First, the Bible never mentions Jesus as having a wife. We have four Gospels providing us with a wealth of biographical information about Jesus, along with several letters from those who knew Him best, and not a single one mentions anything about Him having a wife. On the Cross, Jesus commended His mother to the care of John (John 19:25–27). If Mary Magdalene was His wife (as proposed by many who claim Jesus was married), why didn’t He provide for her care at this time since she was standing with Mary and John? If He was married to someone other than Mary Magdalene, then where was this woman during His ministry? Where was she during His Crucifixion? What about after He rose from the dead? Would she not have been among the 120 disciples in Jerusalem waiting for the coming of the Holy Spirit on the Day of Pentecost (Acts 1:15–26)? Surely someone would tell us about Jesus appearing to His wife. Why doesn’t she ever make an appearance in the Gospels or the remainder of the New Testament?

The Bible never mentions Jesus as having a wife.

In justifying the apostles’ right to have a wife, Paul wrote, “Do we have no right to take along a believing wife, as do also the other apostles, the brothers of the Lord, and Cephas [Peter]?” (1 Corinthians 9:5). If Jesus was married, this certainly would have been a perfect time to mention it to provide infallible support for his argument.

While someone may argue that these are simply arguments from silence, the silence here is deafening.6 If we knew very little about Jesus and those around Him, then perhaps someone could build a case that He was married. But since we know so much about His life and work, the burden of proof lies squarely with those who claim He was married. So in this case the silence of Scripture on this point is supportive of the orthodox Christian view of Jesus being single and never married.

Second, Jesus knew that He had come to earth to die on the Cross. Not only was this prophesied centuries before His birth (Isaiah 52:13–53:12; Daniel 9:26), but it was determined before He ever laid the foundation of the world (1 Peter 1:19–20). Jesus Himself predicted His arrest, death, burial and Resurrection numerous times, telling both His disciples and His enemies (e.g., Matthew 12:38–40; 16:21; Luke 18:31–33). As such, why would Jesus marry a woman and possibly have children with her, knowing full well that He would not be able to fulfill His obligations as a husband and father because of His impending death?

Third, some of the earliest Christian writers claimed that Jesus did not marry. In his response to a group that took a stand against marriage, Clement of Alexandria (c. 150–215) wrote, “Some openly declare that marriage is fornication and teach that it was introduced by the devil. They boast that they are imitating the Lord himself . . . .”7 So although he disagreed with their position, Clement’s quote shows an early reference to Jesus being unmarried. Tertullian (c. 160–230) wrote, “. . . since the last Adam (that is, Christ) was entirely unwedded . . . .”8

Fourth, while marriage in and of itself is not wrong—it was instituted by God in the beginning as a “very good” human relationship (Genesis 1:26–31)—the notion that Jesus, the Son of God, could have married raises numerous theological concerns. The Bible teaches that in marriage, husband and wife become “one flesh” (Genesis 2:24). So if Jesus, who knew no sin, married a sinful woman, would not He and His wife become one flesh as well? Think of some possible implications of such a scenario. By becoming “one flesh” with a sinner, would Jesus become tainted by sin? What type of nature would children from this union have? Jesus was sinless and had both a divine and human nature, yet His supposed wife would have had a sinful nature. So would children of such a union be born without sin or with sin? As physical children of the Son of God, what type of relationship would they have to God the Father? The whole idea of Jesus being married introduces a vast array of confused theology.

Fifth, the Bible does speak of the bride of Christ, but not in the sense of normal human relationships. Many Christians believe the church is the bride of Christ, citing Ephesians 5:23–32, where Paul uses Christ’s care of the church as an analogy for the way a husband needs to treat his wife. The Bible states that the New Jerusalem is the bride of Christ—the Apostle John was told by an angel that he would be shown the bride, “the Lamb’s wife” (Revelation 21:9). In the next several verses, John was shown and describes the New Jerusalem, “the great city, the holy Jerusalem, descending out of heaven from God” (v. 10). Perhaps both passages are simply using analogies to make a theological point or describe a future reality. Whatever one thinks on this subject, the bride of Christ spoken about in the New Testament does not refer to a literal woman and a typical husband-wife relationship.

Consider the words of two leading New Testament scholars in this area of research. After noting that King, because of her advocacy of the Gospel of Mary and the Gospel of Judas, has “a dog in this hunt,” Ben Witherington stated, “While this fragment is interesting, if you are interested in the historical Jesus, this is much ado about not very much.”9 Darrell Bock stated, “It is one speck of a fringe text in a sea of texts that say Jesus was single. It, if authentic, is the exception, to the rule of texts we have on Jesus.”10

Assuming the fragment is actually from a fourth-century document, an idea that is hotly disputed,11 there is still no reason to believe that Jesus was married. It would have been written 300 years after the New Testament was composed—much of which was penned by eyewitnesses to the events they described—and despite what Dan Brown and others claim, there was no fame, fortune, or power to be had by the early Christian leaders promoting their own religious views as infallible truth, because they regularly faced persecution, torture, or death (and no one would die for what he knows to be false). Nevertheless, many critics and skeptics will use this fragment to cast doubt on the accuracy of the biblical text and the authenticity of our knowledge about Jesus. The fact that they must resort to such a small and ambiguous fragment of unknown date or authorship shows just how baseless (and unscholarly) their unbelief is.

The way in which many in the media have already covered this story and the way it will almost certainly be used by skeptics in the future illustrate the fact that many people are desperate to escape the fact that God’s Word is true. Deep down they know they are sinful and they are eager to discount the Word of God so that they can convince themselves that they don’t have to face God someday as their holy Judge. Yet the Bible is true from beginning to end. It is the inspired, inerrant, and infallible Word of the Creator, and we can have absolute confidence in its teachings. And while it is technically silent on the issue of Jesus having a wife during His earthly life, the Bible does not give us any reason to think He was married, and it gives us numerous reasons to conclude that He was not married.