A Meeting of Minds

Ein Stein + one Ham = a dynamic duo of Darwin-debunkers

Two of the better-known challengers of the evolutionary belief system met in Nashville, Tennessee, on Tuesday to discuss ways that the upcoming movie Expelled can have a major impact. 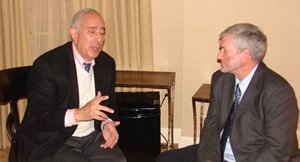 On Tuesday, Ben and Ken met at a special preview showing of Ben’s eye-opening and highly entertaining film Expelled: No Intelligence Allowed. A full review of the Expelled film will appear on this website later this month.

Two of the better-known challengers of the evolutionary belief system met in Nashville, Tennessee, on Tuesday to discuss ways that the upcoming movie Expelled: No Intelligence Allowed can have a major impact on the creation/evolution debate.

Expelled is hosted by the brilliant Ben Stein, actor/economist/lawyer/presidential speechwriter/science observer—a 21st-century Einsteinian figure. While his film arrives at American movie theaters on the weekend of April 18, Mr. Stein came to Nashville for a special preview showing of Expelled for several hundred attendees at the annual convention of the National Religious Broadcasters (NRB). The audience leapt to its feet with generous applause at the film’s conclusion—moved by the undaunted attempts of the Darwin-doubters (and their filmmaking allies) as they challenge the elites in America’s educational and scientific establishments. Many of these Darwin challengers find themselves pitted against powerful evolutionists who despotically protect their evolution belief system, and sometimes expel those who would dare question Darwin.

Before Tuesday’s film preview, Mr. Stein spent 15 minutes chatting with AiG-U.S. President Ken Ham, who informed Mr. Stein that he had seen a director’s cut of Expelled last month at AiG’s Creation Museum. Ben told Ken that he was aware of the “wonderful” facility near Cincinnati and hoped to visit one day (and also to enjoy his favorite ice cream at a parlor chain in our area called Graeter’s, he told Ken!).

“I urge everyone not to miss Expelled. I found it riveting, eye-opening, even astonishing. Ben Stein does a masterful job of exposing the ruthlessness of evolutionists who will go after anyone who challenges or merely questions Darwinian orthodoxy. I was on the edge of my seat—entertained yet instructed.

“This movie is a must-see. Congratulations to Ben and the producers for the courage to create a much-needed perspective on the erosion of freedoms in America.”

Ken pledged AiG’s strong promotional support to Mr. Stein, indicating that AiG will use its multiple outlets to spread the word about his excellent film. After previewing the documentary last month, Ken declared that the film was “riveting, eye-opening, even astonishing. Ben does a masterful job of exposing the ruthlessness of evolutionists who will go after anyone who challenges or merely questions Darwinian orthodoxy. I was on the edge of my seat—entertained yet instructed.”

Ken noted that while Stein is not a biblical creationist, the film he hosts provides a valuable service, as it exposes the tyranny of leaders in the evolutionist community. The film, notes Ken, also reveals the massive scientific problems with evolution theory.

“Freedom is the essence of America,” Stein declares in his narration. He adds that science is supposed “to pursue any line of inquiry,” but when it comes to evolution, that practice is not just ignored, but the freedoms of Darwin-questioners are trampled upon. Several such examples are presented in the film.

One of the saddest moments in the film occurs when a self-described Christian university (Baylor University in Texas) is documented as persecuting one of its own because he questioned evolution.1 Ironically, the façade of one of its buildings has a verse inscribed on it from the book of Colossians, which declares that, in God, all things were created by Him.

How You Can Help

Ben and Ken are requesting the backing of AiG supporters to get out the word about this both entertaining (which features flashes of humor even amidst some tragic moments) and important film. Mr. Stein and the film’s producers told Ken on Tuesday that if large numbers of people come to the movie theaters during its opening weekend (April 18–20), it would send a strong message to other movie houses to carry it, for the film’s theme of repressive censorship and a call for a restoration of freedoms is resonating with so many people.

Here’s what you can do even now to ensure that hundreds of additional theaters not only show the film, but will keep it running for several weeks:

These actions are key to a successful promotion of this heroic film, for a backlash is already building against it by the evolutionist community.

Ken Ham declares that this movie “is a must-see. Encourage your local school board members to watch this well-produced documentary. Even pay for their tickets, but get them there! This is a much-needed perspective on the erosion of freedoms in America.”

We encourage you to spend time browsing the interactive Expelled website: www.ExpelledTheMovie.com. Our movie review of Expelled will be posted to this website later this month.