The just-released documentary Expelled: No Intelligence Allowed does a masterful job of exposing the intolerance against anyone who questions evolution in academic circles (see a full review at Expelled Review). This refreshingly honest movie makes a good contrast to the Bill Maher film, Religulous (see “Mahering” Religious Beliefs). 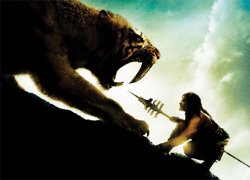 Increasingly, Hollywood sees human origins as a topic that can generate box office revenue in the culture wars of the day.

Another origins-related film, 10,000 B.C., hit the theaters last month. It tells a story of “primitive” people living during a time of mammoths and saber-toothed tigers. Not only does it depict these early people as backward “caveman,” who are our evolutionary forebears, its very title shows a bias against the biblical account of history. The film purports to tell the story of the “first hero,” a caveman, whereas the Bible reveals a long line of “great men” who preceded the Ice Age, including Adam, Abel, Seth, Enoch, and Noah.

Editor’s Note: We authored this short preview of 10,000 B.C. based on the information we had when this issue of Answers magazine went to print. However, after a full viewing of the film by a staff member at Answers in Genesis, we were pleasantly surprised with how little evolutionary indoctrination was in the final product. For a full review, see 10,000 B.C..