The Dissent of Men and the Rise of Their Oppressors

A review of the new documentary Expelled.

Several weeks ago, the Answers in Genesis (AiG) staff was treated to a viewing of the director’s cut of the already-controversial film Expelled: No Intelligence Allowed.1 Expected to release April 18, Expelled is a hard-hitting, yet often humorous, documentary that chronicles how Darwin-dissenters have been ruthlessly expelled, or otherwise persecuted, in their professions. It is hosted by the very entertaining civil rights activist/economist/presidential speechwriter/cultural icon (actor and quiz-show host), Ben Stein, whom filmmakers follow as he goes on a personal quest to examine the origins question.

Expelled: No Intelligence Allowed has become controversial not only because it exposes those academicians who persecute people who have a belief in the appearance of “design” in nature, but also because the film is already generating a negative reaction (including from some of the film’s subjects who come off in a highly unflattering way, including famed atheist-scientist Richard Dawkins). 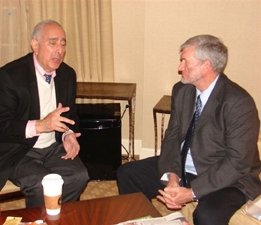 The brilliant host of Expelled, Ben Stein, makes a point during his meeting with AiG-U.S. President Ken Ham just before a preview showing of his film. This superb documentary comes to theaters nationwide on April 18.

As a demonstration of how the evolution police can mete out injustice, the film’s first “persecutee” is an evolutionist himself: Richard Sternberg. He does not doubt evolution, yet Sternberg’s very act of allowing a peer-reviewed research paper that presented evidence for intelligent design to be published in a science journal (Proceedings of the Biological Society of Washington) led to his forced resignation and a career “ruined.” Sternberg, with two PhDs, was the target of the anti-creationist group National Center for Science Education and the Smithsonian Institution (where Sternberg was a researcher), as these groups orchestrated an effort to have him expelled from his position.

In another segment, Michael Shermer, head of the Skeptics Society, described Intelligent Design (ID) as mostly nonsense and would not come to the defense of fellow-evolutionist Sternberg. Shermer bizarrely contends that Sternberg must have done something wrong to have been forced out (even though Shermer admits on camera that he did not know what that might have been).

An hour and thirty minutes later, we watch atheist Dawkins sniff that evolution is a “fact” and “securely” so, and thus dissenters are either not sane or are stupid—or (somewhat more charitably) ignorant. In keeping with the film’s ongoing Cold War metaphors of freedom under attack, Dawkins, earlier in the film, describes the origins debate as a “skirmish” and a “war.”

The arch anti-creationist William Provine is seen as incorrectly stating that it was illegal to teach evolution in Tennessee’s schools during the time of the 1925 Scopes trial. Actually, the state allowed an instructor to teach evolution, unless an instructor said that humans evolved from an ape-like creature. Then there is the stubborn and impatient Michael Ruse, who insists on presenting a non-answer to the question of how the first living cell could have originated; he repeatedly states that it occurred on the “backs of crystals.”

At film’s end, Dawkins makes a remarkable concession—probably jaw-dropping for those who have read his books or watched his media interviews. When pressed by Stein, Dawkins allows for the possibility that life’s apparent design could have been produced by intelligent beings elsewhere in the universe—who themselves had evolved and then brought life here!

Other ID-sympathetic academics give accounts of their persecution in silhouette to maintain their anonymity; these segments bring back memories of the dissenting authors of Soviet Russia who wrote under pen names to avoid being expelled (usually to a frozen Siberia).

In the second half of the film, Expelled settles into a very serious tone, especially in those scenes when Stein visits World War II death camps and explores the connection between the Nazi worldview and Darwinian thinking. Stein is brilliant in these scenes as he goes with the flow of the story as it unfolds in front of him and as he carefully listens to the answers he receives—and then follows up with penetrating questions. He is obviously not working from a tight script.

Yet there are some bright lights and moments of sanity in this penetrating documentary. John Lennox of Oxford correctly points out that all scientists have biases and worldviews that they bring to their research—and then to the conclusions they draw from evidence. Also, David Berlinski, a mathematician and philosopher, sits down with Stein and eloquently brings up the problems with evolution (comparing it to a “room full of smoke”).

Expelled: No Intelligence Allowed, despite its subtitle, is not an intelligent design movement promo, per se.2 Also, some IDers, such as Bruce Chapman of the Discovery Institute, admit on film that ID is not a Christian movement and that people of various faiths are involved. Another IDer, Paul Nelson, though a friend of biblical, young-earth creationists, regrettably offers a wrong definition of creationism. He declares that it is a movement of taking the Bible and fitting it into science. To the contrary, creationists do not “fit” the Scriptures into science. If they did, creationists would be engaged in taking man’s fallible interpretations of science and somehow trying to conform them to the Bible. God’s Word is a book of real history. Using this as our starting point, we can build a correct way of thinking and truly understand the universe. The Bible explains all that is in the universe.3

Although not an ID film, Expelled does present a scientific defense of the idea of intelligent design (one that AiG would largely accept). The incredible complexity seen in a molecule like DNA is shown on the screen (though viewers uninterested in science may have their eyes glaze over during this animated section). Expelled asks the question often posed by creation scientists: where does the new genetic information come from as a mechanism to drive molecules-to-man evolution? Natural selection cannot explain the rise of new genetic information. 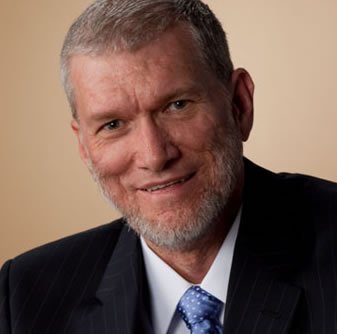 Ken Ham, president of AiG and the Creation Museum, had the following things to say about the Expelled documentary:

“I urge everyone not to miss Expelled. I found it riveting, eye-opening, even astonishing. Ben Stein does a masterful job of exposing the ruthlessness of evolutionists who will go after anyone who challenges or merely questions Darwinian orthodoxy. I was on the edge of my seat—entertained yet instructed.”

“Challenge school board members in your community to watch this well-produced documentary. Even pay for their tickets, but get them there!”

“Congratulations to the producers for the courage to create a much-needed perspective on the erosion of freedoms in America.”

Overall, the film is more about exposing the fear of evolutionists in allowing free speech in scientific inquiry (and their accompanying tyrannical behavior) than it is an anti-evolution piece. Stein discovers an elitist scientific establishment that has exchanged science’s supposed quest for open-minded inquiry for harsh dogmatism. Freedom, “the essence of America” says Stein (a former civil rights lawyer), is easily taken away at universities, with qualified scientists expelled for not embracing evolution.

In one of the many ironic and hypocritical moments seen in the film, a Baptist university, Baylor University in Texas, is documented as persecuting one of its professors because he questioned evolution. The façade of a Baylor building then comes on the screen, and we see an inscription of a verse from Colossians 1. It declares that “in God, all things were created by Him.”

So, how will hard-core evolutionists attack this documentary? It is likely they will attack it on at least two major fronts by:4

Regarding the latter, we wish to point out that from his own words, Charles Darwin can be shown to be a racist (even though he advocated abolition). On the last page of his The Descent of Man, Darwin said he would rather be descended from a monkey than from a “savage.” Furthermore, he called those with dark skin “savage,” “low,” and “degraded.” Also, the subtitle of Darwin’s main work On the Origin of the Species happens to be: “The Preservation of Favoured Races in the Struggle for Life” [emphasis added]. This is not at all surprising, for, as AiG president Ken Ham points out in the new book Darwin’s Plantation, Darwinian evolution claims that humans descended from ape-like ancestors, and this logically implies that certain “races” are closer to the apes than others.5

In summarizing Expelled’s ultimate goal, Stein declares that he wants to see a world where “scientists are supposed to be allowed to follow the evidence wherever it may lead, no matter what the implications are. Freedom of inquiry has been greatly compromised, and this is not only anti-American, it’s anti-science. It’s anti-the whole concept of learning.”6

AiG has not been sanguine about elements of the intelligent design movement and some of its well-intentioned activists. But having watched the movie twice now, we note that the film is not about trying to push ID on society, much less argue that ID should be mandated in schools (which AiG would not support).7 Also, the film makes it clear that the ID movement is not a Christian one (although many evangelicals are part of it). More than anything, the documentary seeks to expose the ruthlessness of radical atheists and evolutionists and their attempt to erode freedom in order to protect their own worldview. In its goal, Expelled has marvelously succeeded.