Researchers were surprised to discover recently that the Neanderthals of Europe were probably using sophisticated bone tools before other humans moved into the region.

A bone tool called a lissoir found in a cave in southwestern France suggests that Neanderthals had sophisticated ways of working leather.

Evolutionary scientists believe that about 40,000 years ago, so-called Cro-Magnon people were replacing the Neanderthals. Near that time, they say, Neanderthals began to exhibit behavior associated with these new arrivals in Europe. That included the use of bone tools and body ornaments. For years, evolutionists have debated whether the Neanderthals developed these skills independently or as a result of contact with modern humans. Their evolutionary bias makes them assume that Neanderthals were not capable of the same degree of abstract thought and creativity as humans living today.

A study appearing in the Proceedings of the National Academy of Sciences* reports that a specialized bone tool, the lissoir, was found among Neanderthals at two different sites and carbon dated to 41,000–47,000 years ago, a time before so-called modern humans arrived in Europe.** This smoothing tool was used to make animal hides tougher and more impermeable. It was made by grinding and polishing bone rather than chipping rock, and it had not been associated with the more “primitive” Neanderthals. The bone tool is evidence either that Neanderthals were capable of inventing such a specialized tool or that they encountered other humans earlier than previously thought. The study’s authors even raise the possibility that Neanderthals introduced the tool to Cro-Magnon humans rather than the other way around.

Of course, regardless of whether Neanderthals independently developed such tools, they did not live 40,000–50,000 years ago, and they were certainly no less human than we are. Humanness does not depend on technology or advanced culture but on the image of God, imparted to Adam and Eve at Creation and passed on to all of their descendants. After the Flood, all the original people who were dispersed from the Tower of Babel would have been familiar with toolmaking.

As scientists learn more about Neanderthal people, their discoveries fall in line with what the Bible tells us. Neanderthals buried their dead in graves, wore jewelry, and tailored their clothing. They showed creativity and problem-solving skill. They were not less-evolved predecessors of modern humans. They were simply people who split off after the Tower of Babel, about 4,000 years ago. 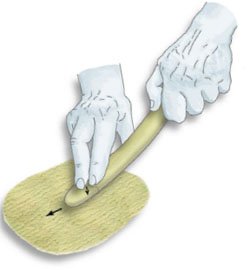 Neanderthals might have used the tools known as lissoirs, or burnishers, to make hides tougher and more waterproof.

**For a review of carbon-based dating, see http://www.answersingenesis.org/articles/am/v5/n4/carbon-dating.