How to Make Sense of Ape-Men

Researchers have unearthed some intriguing human-like fossils. Did ape-men once walk on the earth, and should it matter to Christians?

Every few months, headlines announce the discovery of a new hominid fossil. Often they make the sensational claim that the new fossil “rewrites” the story of human evolution. Should Christians be concerned about these scientific discoveries? Can you believe that humans and apes are related and still believe the Bible? Could Adam have been an ape-man? And what does any of this have to do with the message of the gospel?

Christians should celebrate scientific exploration of the world we live in. God has created an amazing place for us. Studying the creation is, in a sense, uncovering how God created. But we must recognize that our worldview colors our thinking about the past. People who believe in millions of years of evolution interpret fossils differently from people who believe God specially created humans only a few thousand years ago.

When researchers unearthed the famous Lucy fossil in 1974, the bone fragments didn’t come with a set of instructions. No directions explained how to put the pieces together. No one found a bone labeled “Buried 3.2 million years ago.” But scientists eager to help write the story of human evolution declared that Lucy was our cousin. Artists creatively fashioned the fragments of bones into models at museums around the world. All of the museums promoting evolution show her standing or walking upright. Sculptors gave the chimpanzee-size creature human hands and feet. Those features were not based on actual finger and toe bones (there were none) but on ideas—evolutionary ideas. Starting from the idea that humans evolved from apes, museums portrayed Lucy as part human and part ape.

Dr. David Menton, the anatomist who supervised the Lucy reconstruction at the Creation Museum, rejects evolution. As a biblical creationist, he begins his scientific study of fossils believing that God created apes and humans as distinct kinds of creatures. Looking at the same evidence, Dr. Menton arrives at a different conclusion. His model of Lucy depicts her walking on her knuckles, like an ape. He chose this posture after studying the length of the arms, the shape of the hip bones, and the shape of the skull fragments. 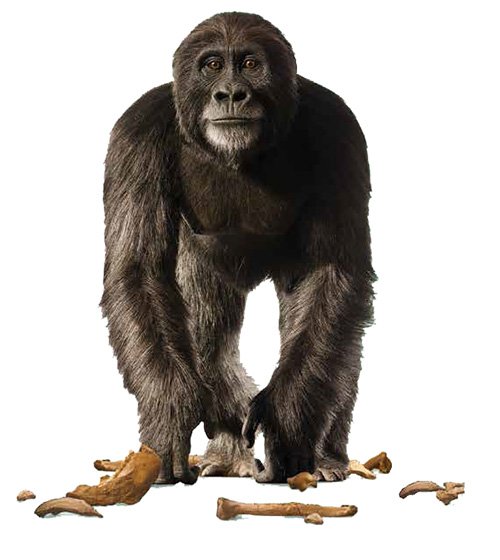 Artists and researchers at the Creation Museum developed this ape-like reconstruction of Lucy based on its fossils and a biblical understanding of apes and man.

To create an ape-man from fossils, evolutionists have three options. Sometimes they combine ape and human bones. For decades many paleontologists held up Piltdown Man as a human-ape transitional form. But Piltdown Man was proven a hoax in 1953—a human skull connected to an orangutan’s jaw, with some creative filing on the teeth. It fooled many people in those early days of modern anthropology, even some scientists who declared it a “missing link.” But that link snapped under the weight of detailed examination.

Another way to make an ape-man is to emphasize the ape-like features in some human fossils. Homo erectus and Homo neanderthalensis, for example, are often made to look like apes. Historically, Neanderthals have been portrayed as brutish, hulking figures barely capable of grunting. With further research, a picture of intelligent, artistic, truly human beings has emerged. Researchers no longer depict Neanderthals as subhuman, but as just a variation of early humans. If a Neanderthal were walking through a busy town square, you might not even notice her.

Similarly, evolutionists have tried to elevate some ape fossils to the status of human. This is the case with Lucy. A famous video shows one scientist using a saw and grinder on a replica of Lucy’s pelvis. Why? He “knew” that Lucy walked upright, but her hips were the wrong shape. So he cut and ground them until they “fit the way they should.” By changing the shape of the pelvis and emphasizing features of the fossil that seemed closer to human than ape, Lucy the lady was born.

Despite these attempts to justify an evolutionary view of human ancestry, humans have always been distinct from apes. None of these three methods of interpreting fossils shows that apes and humans share a common ancestor. The Bible makes it clear that God created mankind separate from the various apes. As God presented the animals to Adam to name them, Adam didn’t find his counterpart among the apes. It was not until God specially created Eve that Adam had a mate—a helper comparable to him (Genesis 2:18). All of God’s creatures—including mankind—were specially created to reproduce more of the same. Apes produce more apes, and humans produce more humans.

But isn’t this just a squabble among scientists over some old bones? Does it really matter whether we evolved from apes? Human evolution has several important implications. Saying modern humans evolved from apelike creatures denies key biblical truths. Genesis tells us God took the dust of the earth and fashioned Adam in a supernatural act, breathing life into him. In a similar miracle, God created Eve from one of Adam’s ribs. This sounds nothing like the supposed evolutionary process over millions of years. The two ideas are irreconcilable without turning the early chapters of Genesis into a myth.

Looking to the Bible as our authority compels us to reject the evolutionary view.

Adam did not come from any creature before him. God fashioned him as a potter forms a vessel from a lump of clay. While the origin of Adam’s physical form is important, a more important truth is at stake. Genesis 1 teaches that Adam and Eve were made in the image of God. If Adam and Eve were merely representatives of the hominids that evolved from an apelike ancestor, where does the image of God come in? Do apes bear the image of God? Surely not! This is not a problem for atheists, who deny God created anything. But it is a problem for Christians who believe we evolved from an apelike creature. Looking to the Bible as our authority compels us to reject the evolutionary view.

Another implication relates to morality. If humans are merely advanced apes, then why should we act differently from apes? By denying God’s existence, atheists have no real answer to this question. If animals have no moral responsibility—we do not condemn a tiger for killing another tiger—why condemn a human for murdering another human? Knowing that God has made us in His image, Christians have a reason to say that killing another human is immoral. As those made in the image of God, we have a responsibility to love God and one another as He has commanded us. Our ultimate reason for morality is God’s character and His revelation of that character to us in the Bible. As image bearers we are responsible to reflect the character of the God who created us. Anything less than a perfect reflection of that character is sin.

Fossils of apes and humans are subject to lots of interpretation because they are broken and fragmentary. Lucy’s arm and leg bones, for example, could be longer or shorter, depending on how we fill in what is missing. 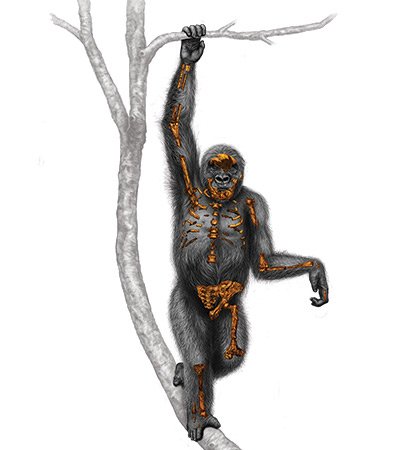 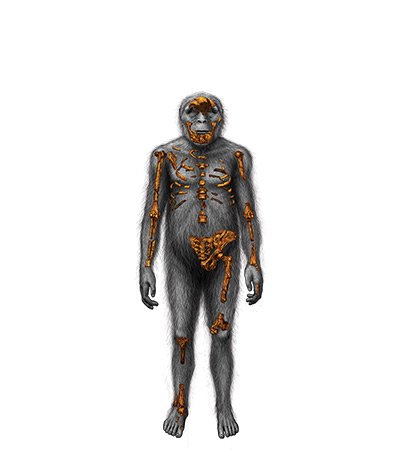 But the greatest consequence of believing in human evolution is undermining the gospel! Accepting human evolution means accepting that death and disease over millions of years produced the first humans. If Adam was an ape-man, then he was not the first man created by God. He did not bring death and sin into the world or corrupt all of humanity. We don’t need salvation from God’s judgment.

But the Bible teaches the opposite. God created Adam in a supernatural act (Genesis 2:7). Adam’s sin brought death and sin into the world (Genesis 3). Like the first Adam, each person sins against God (Romans 5:12). All people need salvation from God’s judgment against their sin (Romans 5:12–19). But there is hope in the gospel message. Only Jesus Christ, the Last Adam, provides that salvation and gives eternal life to sinners (1 Corinthians 15:45–49). Just as Adam was a real man, Jesus Christ is a real Savior (1 Corinthians 15:22). Denying the biblical Adam leads to denying Christ.

Far from being a silly debate about some old bones, the question of ape-men is crucial and the right understanding is vital. If we accept that man is merely an animal and deny that he is made in the image of God, we lose our moral compass. If we deny that Adam was supernaturally created by God, we undermine the hope of the gospel.

Roger Patterson taught in public schools for eight years before joining Answers in Genesis. He earned his BS Ed degree in biology from Montana State University-Billings. Roger is author of Evolution Exposed and serves on AiG’s editorial review board.